As some of you guys may know my neighbor Naomi is currently in skilled Nursing Care. She is doing better and I thought I would make her a card to give her tomorrow as I told her we would have lunch together. So not only does she get some of our favorite chicken livers she will get a nice little card to!

I recently acquired the cartridge Country Life and kept looking through 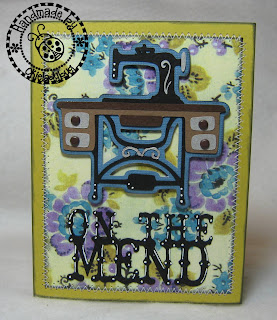 the cuts to see what I could use. There wasn't a sentiment I wanted to use but when I saw the sewing machine I immediately thought of "on the mend" since Naomi's condition is improving. Now I want to tell you that I had every intention of sharing the .cut file but my computer locked up and the file was lost before I could save it *okie bangs head on desk since she usually always does save through out when designing a .cut file and feels stupid for not doing so this time*.

The patterned paper is some that my friend LGuild gave me quite some time ago, she had deemed it UGLY paper and while she couldn't think of a use for it I think it looks like fabric and works good for this card.

I do know the sewing machine was set at 3" when I cut it. I spelled out the sentiment and had it grouped as one and welded so it could be easily copy and pasted *okie sighs deeply* and of course all that work went down the drain! I am just glad I did get everything cut before the computer locked up! 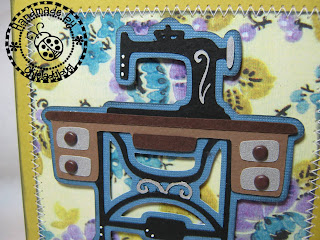 it gives a little extra dimension. The little swirl on the sewing machine was a bit of a booger *okie giggles because she said booger* to cut and I did have to recut one that I tore taking up from the mat.

I hope nobody likes this card so no one will be upset that there isn't a .cut file available. I guess if enough people did like it I could go in and recreate it easily enough, but then again...as everyone knows I am lazy! *okie cracks up laughin*
Posted by okieladybug or okie_ladybug

Email ThisBlogThis!Share to TwitterShare to FacebookShare to Pinterest
Labels: A2 Card, On The Mend Card