Last night I was getting ready to hit the hay and I got a message on my cell phone. It was from Provocraft's Twitter account saying they were going to have some giveaways during the Martha Stewart Cricut Cake airing on HSN. Of course me being the person I am *okie thinks cheap*, I had to stay up and see if I could win something. I also was curious about the Martha Stewart edition of Cricut Cake. There were some fabulous cakes aired that is for sure. My ability to make cakes that looked that well, I am not so sure about!

Well I didn't win the first cartridge which was Birthday Cakes. For that one we had to tell what our oddest wedding cake was that we ever saw. I said Armadillo, of course it was a Texas wedding so it kinda made sense to me *okie cracks up laughin*. Of course had it been an Oklahoma wedding the cake would likely have been an Opossum! I was watching the HSN airing and posting on the Cricut Circle board and the regular Cricut MB and decided it was time to head to bed when the segment was over. 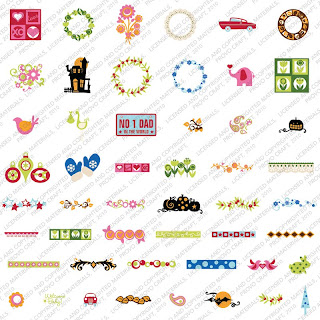 t of Twitter on my computer. When Provocraft Twittered that for the next giveaway of the Holiday Cakes the first person to answer the question won. The question was "Who originally said 'let them eat cake?' ". Of course in all reality no one really knows but it is usually attributed to Marie Antoinette. I quickly logged back in and Twittered my answer and POOF! I WON!

Now mind you I don't have a Cricut Cake but some of the cuts on the cartridge will be great for cards and layouts!! I can't wait to try out the haunted house!! And the borders are great!!

It will probably take a couple of weeks to get here so I have plenty of time to think about what I want to make!