I haven't forgotten about this thing or been on a hiatus. Instead I have been going from one project to another and haven't had time to sit down and upload and edit pictures and write out posts but I'm going to try and catch up with posting my projects, some of which were quite time consuming!

As I scroll through Facebook there are always advertisements about t-shirts and say "order now" or "hurry" "while supplies last" and some of them are hilarious and of course I don't ever think about ordering since I have HTV and a heat press so when one particular t-shirt showed up I knew I was going to have to make it but tweak it just a tad bit. 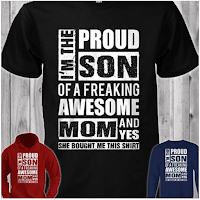 Since I don't have a son but do have a son-in-law who may or may not think I am freaking awesome I still wanted to make him this t-shirt. I even told him I was going to make it and I didn't care if he wore it to work, as long as he wore it at least once. By the way, he does outdoor maintenance work so I knew the t-shirt would get ruined if he did wear it to work.

I changed the son to son-in-law, mom to mom-in-law, and the bought to made to customize for my use. 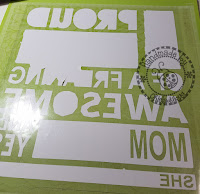 I did like how some of the words were box negatives and kept that idea and while weeding I forgot a few times that is what I was doing and I took out the little triangle of an A but luckily I was able to put it back in there. I finally decided to just work one area at a time instead of skipping around and that helped me focus on what I was suppose to weed where. 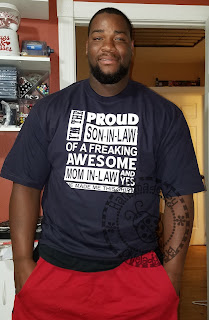 Here is a picture of my son-in-law wearing his shirt. I had to him put it on for a picture and figured that would be the end of that shirt but my daughter told me he did wear it when they went to a friends house for a get together *okie feels a tinge of pride* and I think has worn it another time as well. Years ago when Chuck first came to be in our lives I made a lot of things for him due to him playing football and he usually was the one to tell me what he wanted and where he wanted it. I guess you could say he is actually the reason I got into the whole HTV and heat press thing in the first place.

As always I am sharing the file for free *okie thinks most people slide by the donation button really quickly and act like they don't see it*.