My friend Lori's 50th birthday was about a week ago but due to the Labor Day holiday she had her party a little early. Carmen and I had made great plans to get a project done for Lori's birthday party and I was going to surprise her and show up at the party but due to my niece having her baby that weekend I choose to cancel the trip to Houston and I spent that weekend making the baby projects I posted a few weeks ago.

The project Carmen and I decided to do was something that came from Pintrest where someone had made silhouettes of the Disney Princesses and then used buttons for the dresses. I had posted it on Facebook and told Carmen I thought we could make those and Lori and commented that she knew someone who would love those and said "ME!" And that is how the idea was born.

Anyway I had to ship the finished pictures to Carmen so she could put them in the frames and get them to Lori. They were a few days late getting to Lori, partly because my Goddaughter decided to bring the box back in the house that I had set out for the mailman to pick up. 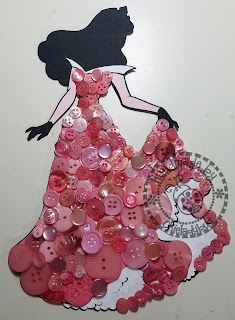 While I was working on the button ladies I would send Carmen pictures of the progress I was making. Aurora was the first one I did and when I sent Carmen this picture I asked about the white of the slip of the dress and of course Carmen said it needed to be in buttons too *okie makes a note not to ask Carmen questions anymore because she causes okie to have to do more work*.

The problem became that I didn't have enough small buttons to fill in and I had to think of what I could do to get the area all covered without having too many buttons on there so I came up with the solution of cutting the buttons! As luck would have it I keep a small pair of needle nose pliers in my craftroom and they worked out great for getting the buttons cut down to the sizes and shapes I needed. 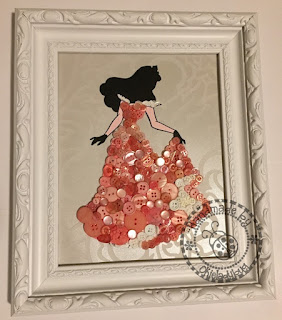 When Carmen went to find frames she sent me pictures of several ones and we decided on white frames. For the background I used some pearl paper and then cut out designs on vellum to put on top of the pearl paper so there would be a nice background but not distract from the artwork.Yes I said artwork because after all the time and effort I really feel they are more artwork than a craft project. I was a little blown away when I saw the finished projects because the frames just set them off beyond what I would have imagined!

Now this Sleeping Beauty wasn't the only one I did...there are 3 more and they will be posted the next 3 days. I could have posted them all together but I feel they deserve their own post.