A few weeks ago I decided I was going to finally make dust covers for my machines, printers, etc and use the fabric I had originally bought to make curtains for my french doors. Since I did the  faux STAIN GLASS on the doors I needed to use the fabric for something and it did match my craftroom well so problem solved.

I had a new problem, no pattern for the Explore! I actually tried several before I got it how I wanted it, and then I still had to do several adjustments in the process. My mom was great at making patterns and I'm sure she would have gotten it right the first time but I'm not quite as proficient at the skill.

During this whole process *okie wonders if they understand it was a very long process* my daughter and I went to Wall's Bargain Center and I was looking at fabric and found some I thought Carmen would really like since her favorite color is blue. I sent her a picture and she loved it so I decided to make her covers for her Explore and Cameo. Mind you, I still hadn't made the cover for my Explore or other items. 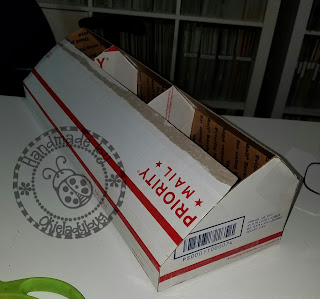 Next issue? Well I don't own a Cameo nor do I have access to one close by so I had to have Carmen give me measurements and it was driving me crazy trying to figure out if it was going to work or not. I don't know how many pictures and texts were sent back and forth during this whole operation but let's just say I'm glad we don't have to pay per message anymore, especially with pictures! I finally got some cardboard *okie wonders if anyone else saves their cardboard boxes they get mail in* I had been saving and fashioned a cardboard Cameo so I could check to see if the cover would work. Evidently I do not need to talk and measure and talk and sew at the same time because I got the cardboard Cameo 2 inches too long and the cover about 1.5 inches too short, that was even after cutting down the size of the cardboard Cameo! 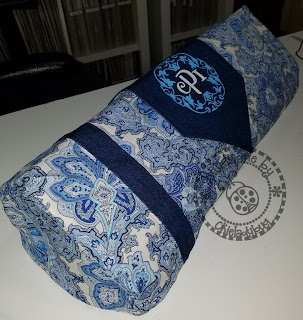 To resolve the issue about the cover being too short I added a strip of denim and decided to call it a decorative stripe so my OCD wouldn't have me tearing the whole thing apart and starting over. Finally the cover fit on the cardboard Cameo! Let me tell ya folks...it is not easy sewing blind! Okay for some folks it is probably easy, but for me it is not! 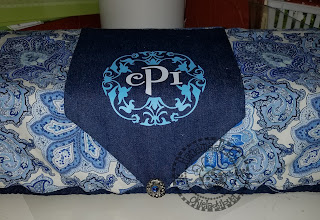 To make of for the shortness of the Explore cover I added a strip of denim at the bottom of the cover and made sure there was enough room to run some 1/4 inch elastic through the bottom. The denim at the bottom didn't bother me nearly as much as the decorative stripe on the Cameo cover! 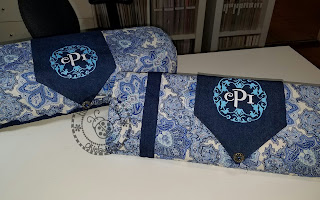 I asked Carmen how she wanted her flaps decorated and she said she wanted her initials on them. I couldn't do just initials so I made a flourishy *okie doesn't think that is a real word since it just underlined in red but is going to keep it because she likes it and dammit it is her blog and if she wants to make up words she can* design for the initials to be placed in the center. I used HTV to do the design and intials. I also went through my jar of "very special occasion" buttons and had Carmen pick out buttons for the flaps.

Carmen was thrilled with the pictures and I am sure she will be thrilled with the covers *okie knows Carmen is so easy to please most of the time* once she gets them. Yeahhhhhh...I haven't mailed them off yet. I actually told her this was a "pick up only" order but I know that can't happen right now so I guess I will need to get them in the mail!

After I get my patterns all tweaked I will probably post them on here so keep a look out in the future if you would like to make dust covers!
Posted by okieladybug or okie_ladybug