Like everyone else I heard about how wonderful the Yeti Stainless Steel Tumbler was but I just never could justify the cost of the thing and then all the off brands started coming out and I began to consider getting one. Then...THEN...Walmart came out with one that was only 10 bucks and I knew I would get one for that price. But alas, I never seemed to be able to find one in the store.

Evidently everyone and their mamma has these things and there are kinds of brands such as Rtic, Corkscicle and Kodiak to just name a few and being a crafter I am aware of all the cool colors you can get now and how everyone is decorating them. When I was in Houston Tuesday Morning had gotten some in and they had some nice colors but Carmen and I were too late to buy any when we made it to the store. I was really beginning to think it just was not meant for me to have one of the damn things. And if I am honest I have been quite skeptical about the whole trend so I wasn't like dying to have one but by this time it was a mission. A mission that I had to complete!

Once I returned from Houston I had decided to order one online from Walmart and when I check it said they were in my store! I went the next day and looked and looked and couldn't find it. I finally went up to the sporting good counter and there was another lady there asking about them. The worker told us that he had some in the back and would go and get them. He came out with a box of the 30 ounce tumblers and the lady that was there before me said she wanted 4 and as we were discussing the tumblers another lady came up and said she had came in looking for them as well and needed 2. Both ladies already had them and were singing the praises of how wonderful the tumblers are so I ended up walking out with 3. I figured if they were flying off the shelves that fast I better get one for my daughter and son-in-law as well. 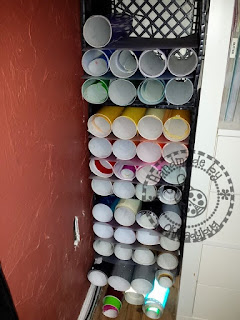 Now ya know as a crafter who has a wall of vinyl I knew I had to put something on the tumbler. Okay I don't have an actual wall of vinyl but I have a nice collection of different colors. This is actually an older picture and there has been a bit of an addition but I was too lazy to take a new picture. Also the crates have dividers that I made out of cardboard that are more sturdy that what was used in the picture and also keeps the rolls from falling out of place when I pull a color.

But back to the whole vinyl thing. My concern about putting vinyl on the stainless steel tumbler is that it is not truly smooth and when being washed was the vinyl going to peel up. I know a lot of people are adding vinyl and I have heard a lot say how it doesn't stay but since I have a plethora of vinyl I didn't think the small amount that I would likely use would hurt my stash. 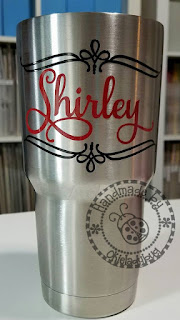 The Samantha font is one of my favorites and I wanted something nice on my tumbler so I pulled a swash from it and then worked with the letters to find some that would swirl but also not swirl too much and this is what I came up with. Now ya may say what many others did "WHAT?? NO LADYBUG??" and I did use ladybug colors so I think that counts for something!

I did this about two weeks ago and I do hand wash carefully and the vinyl is staying on so far. I did have someone ask me to do one for her and I initially said yes but then said no after all the complaints I heard about the vinyl coming up and I didn't want something returned or someone demanding a refund for what they feel is shoddy work. With that said I am suppose to do one for someone and she promised not to complain if the vinyl starts to peel.

I haven't done anything to my daughter or son-in-law's tumblers, and not sure he really wants anything on his but I know my daughter does so I will be doing hers sometime in the future.

Oh and as far as liking the tumbler...ERMAHGERD I LUVZ IT!!! I stop of a morning and get a Diet Coke and the store I go to has the slushy ice and even when I leave my tumbler in the car during the heat of the day my slushy ice is still in there!
Posted by okieladybug or okie_ladybug