Ya know there are plenty of times when you are browsing through Facebook that you see something and you think to yourself "OMG! Self you need to make that" but you really don't have a reason or purpose for making such a thing you are looking at so you just toss it to the wayside. 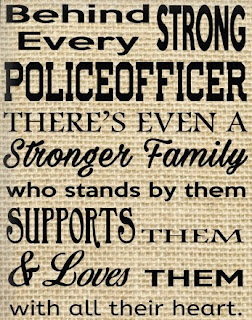 When I saw this quote about police officers and their families while scrolling through my Facebook newsfeed I had that thought but I knew exactly who I could make it for. There is a young couple that my kids know, actually the wife was my daughters matron of honor and the husband played football with my son-in-law, and the husband is a member of the police force here in town and I just knew I had to make it for them. Having a degree in Criminal Justice also tends to make me have a very strong respect and love for officers of the law. 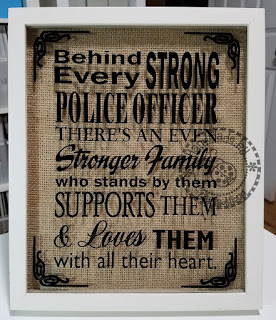 I messaged the wife and asked about what color frame and was glad when she said off white because I had picked up some of these frames at Wall's quite awhile ago and hadn't used any. They were actually for a retirement picture and had a bit of a shadow box look but I figured I could rip out the guts and use them for my own use, which obviously I did with this one. She also said she liked the burlap look of the original quote and luckily I had burlap. On a side note, thanks to my Aussie friend Janell I know know that burlap is called "hessian", so if you are ever on Jeopardy this information might come in handy.

The process of removing the guts and getting the burlap on there was a process. I tried several things, and I won't bore you with the details, and ended up just cutting the piece of burlap the size of the back of the frame and gluing it down. 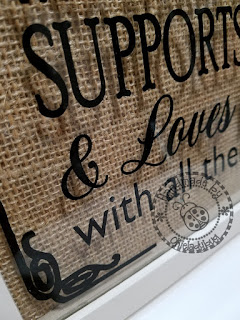 In this picture you can see how there is room between the glass and the back of the frame where the burlap is glued and if you look at the bottom of the frame between the glass and burlap you will see a thin line of chipboard. In order to get the glass to stay in place I had to come up with something and since I don't have any glazier points handy and it was around midnight when I was working on this it was the best I could come up with. I think I cut about 4,827 *okie wonders if she might have just exaggerated a little bit there* strips of chipboard at 3/8 of an inch and then glued strips together until I got the thickness I needed, which oddly enough was about 3/8" of an inch as well. I used some Terrifically Tacky Tape on two sides of the strips, with one side going on the glass and the other on the lip of the frame, to hold it in place.

Since I have a number *okie is too lazy to walk to her craft closet and count them* of these frames I will be picking up some glazier points for future use.

While I probably could charge for this file I won't and offer it freely, I figure what's the difference since if someone wants it they can just do a trace of one of my pictures and make their own and it just saves someone time in the future if they want to make one *okie figures she has probably give thousands and thousands of dollars of cutting files away over the years for this very reason, plus she is too lazy to email people back and forth about such things*.