Well they aren't really glass, they are plastic but saying GoVino Beer Plastics just doesn't sound right so GoVino Beer Glasses it is. Anyway, I got a few sets of these at Zipp a few months ago and they have been in my craft closet and when I pulled a set out looking for something else and my daughter saw them she said she wanted a set with vinyl on them. She made a list of what she wanted and I told her I would get them done for her *okie is quite impressed that it didn't take her a year to get them done because it usually does*. 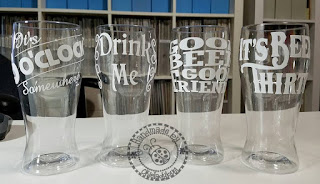 I couldn't get the saying's completely straight because of the double curve of the glasses. I had to take my time putting the vinyl on and work with it a little to get it to lay flat and thank goodness I was able to pull it up in some places and then put it back down *okie thinks working with a double curve is a bitch* and smooth it out more. I guess I need to work on that double curve issue since I think I have like 3 more sets of these. I couldn't buy just one set when I was able to get like 4 sets for the price of one set.

My daughter was pleased with the results, at least I think she was. If she wasn't she didn't say anything about not liking them. The glasses say, from left to right -
It's 5 o'clock somewhere
Drink Me
Good Beer Good Friends
It's Beer Thirty
Posted by okieladybug or okie_ladybug