One of the ladies in one of my groups at the ICF/IID asked if we could make get well cards and after we discussed it we decided "thinking of you" would be better since they could be used for a variety of occasions. The two groups that I do out there did 4 different thinking of you cards which was a total of 48 card kits I did for the groups and then I made a few of each because I needed a sample card for them to look at and I couldn't do just one because that would be an odd number...I can't do odd numbers.

This is the first of the thinking of you cards they did. 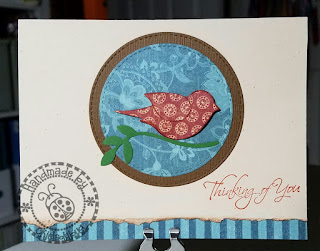 I always have all the elements cut out for the groups since I have limited time and there are 6 people to a group but each person put their card together and they also did their stamping. I did have them stamp the "thinking of you" on the card first so they would have a better idea of where to put their circle.

I tore the bottom of the front of the card off and inked it a bit and the stripe paper is taped to the inside base of the card.

I always gripe about how much work it is to do the card kits but to see the looks on their faces and the comments they make about completing a card always makes it worth the effort. Yesterday we started the birthday cards they make every summer and they get to make 4 of those as well and I'll post them when they get done.
Posted by okieladybug or okie_ladybug

Email ThisBlogThis!Share to TwitterShare to FacebookShare to Pinterest
Labels: A2 Card, Graphic 45, Stampin Up, Thinking of You