In Love With Heartfelt Creations!

Right before going to Florida back in March I was looking around on Facebook and someone had posted a pile of flowers they said they made with some Heartfelt Creation stamps and dies. I don't think I had ever really paid attention to that company before but for some reason I decided to look up some of their stuff and signed up for their newsletter. I promptly got a link to a video that showed how to make 7 different flowers with their Arianna Blooms set...I WAS IN LOVE!! 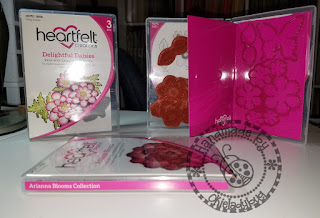 I kept looking at the different sets they offer and one day while Karen was at work and I was left to my own devices I started looking again and called Carmen and asked her which sets she thinks we would use the most and we decided on Arianna Blooms, Botanical Rose and Delightful Daisies. I was able to find a coupon code, I believe for 20% off, and the shipping was free...which is a good thing since they are kinda pricey! 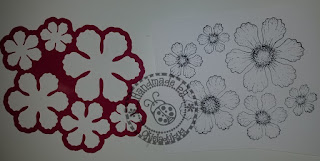 Here is a picture of the Botanical Rose set stamped and the die next to it. At first I didn't think I would like the flowers all being connected but I soon found out it was a great idea and I was also able to only stamp off some of the smaller flowers by only inking those and then cuttin my cardstock down so the die would only cut those. 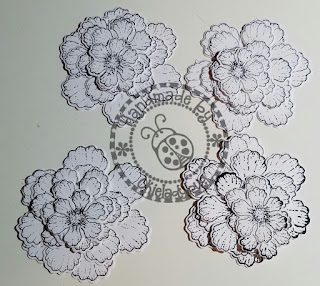 Here you can see them stacked up, I thought this would show the different sizes a little better than just being all flat on the sheet of cardstock. This particular set has 5 different sizes, the smallest flower stamps and cuts twice. 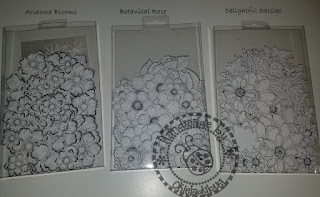 I spent a whole weekend stamping and cutting the flowers. This is a picture of my stash but I sent Carmen a stash of them as well. I thought it would be a good idea to just get a bunch stamped and cut to have for when I wanted to use them instead of having to stamp and cut each time. This way I can just pull out what I want to use, ink, shape and POOF...I will have flowers! 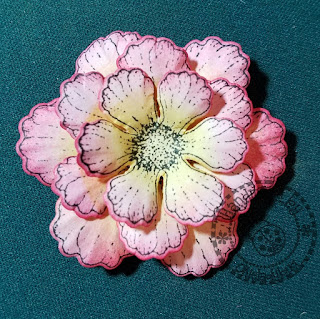 Being honest I will say I haven't used these much but only because I haven't made much of anything lately that needed these types of flowers. I did do a few flowers for practice and put them in a jar for later use. I still like the McGill Flower Tools I got off Amazon and posted about a few months ago and ordered the other set that had the larger balls. Both sets were still cheaper than the Heartfelt Creation Tool set and I think I like not having to change out the ball ends when I want to use a different size. 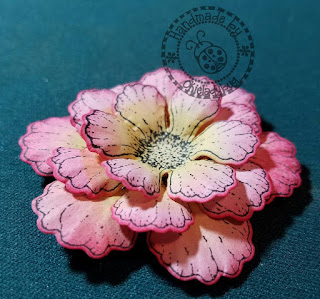 I inked the middle with Stampin Up So Saffron and then the outer edges with I believe Regal Rose to color these flowers. I like having the option to color them with whatever ink and colors I want. I used mounting foam in between the 3 layers in the picture. I need to work on these a bit more as I will say it does get easier with practice.

Oh and if anyone wants to get me an early birthday or Christmas gift you can always send me the Under The Sea Stamps and Dies....it's to die for and I would love you forever!!
Posted by okieladybug or okie_ladybug