Today another French Country project was scheduled to post but I wanted to share this project so I pushed that post back. A few days ago a really cool looking 4th of July Decor popped up on my newsfeed from Hobby Lobby and I fell in love with it and thought "I can make that with paper!" I immediately, well almost immediately, got into Make The Cut to design a file. The file is available for download in MTC and SVG formats at the bottom of the post. 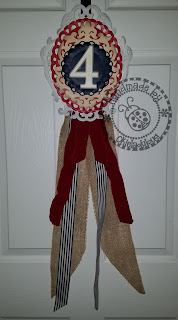 I used the Liquitex and Krylon Acrylic Sealer on my so I could make it somewhat waterproof in case I wanted to hang it on my front door, which was my intention when I thought about making it in the first place. The burlap ribbons are cut from a sheet of burlap I had left over from my daughter's wedding. I added some Sobo glue along the edges to keep it from fraying. I also used the same glue to put the pieces together, this stuff is awesome! The stripe ribbon is from a roll I found at Zipp Outlet a few weeks ago and the red velvet ribbon is actually some Christmas Ribbon I got after Christmas on clearance. 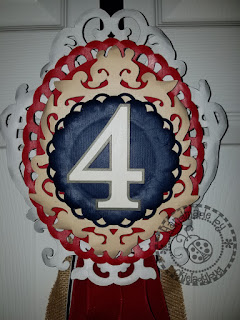 Here is a close up of the medallion part. I did make a "4" to put in the center since that is what was on the original and afterwards I had wished I had put a Uncle Sam in the middle instead but it was already done. I did get back in the file and make a hat to use so if I make another one I can put it on there instead. The file below does contain the 4 and the hat but you could always put something else in there as well. I cut the white base piece at 11.5 inches so I could make it as big as possible with one sheet of cardstock. If you use the file you will need to resize for what you want to make. 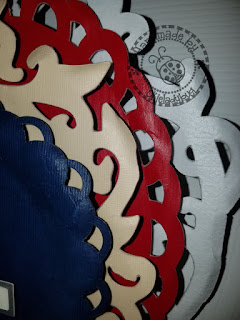 After applying the Liquitex I thought the pieces would look better if I added some shape to them and I was able to get a little shape to the pieces. Next time I will shape the paper BEFORE I add the Liquitex or Mod Podge since it will be easier to shape. I am still pleased with the results, or at least half way pleased.

I used my McGill Flower Shaping tools to do a little of it but mostly I just used my fingers to manipulate the paper how I wanted, and again...next time I will shape before adding sealers. 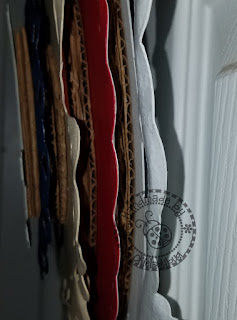 To get the layers to pop away from each other I used some regular cardboard and cut it to the size I needed for the back of each layer. This step really made it look a lot better. I wasn't worried about it not being acid free since there are no pictures on the project *okie knows someone will probably wonder about that*.

I forgot to take a picture of how I attached the ribbons but I actually just stapled them to the base layer on the back. If you are going to staple your ribbon on the base I would suggest doing it before putting the layers together, it would make it easier....and we won't discuss how I know.  I didn't have a hanger made for it when I put it together so I had to make a hanger with some ribbon but the file now has a built in hanger that will cut on the base layer.

I think I want to make another one of these with an Uncle Sam hat just to see what it looks like. I think a star would look nice or USA, there are a lot of different things you could put in the center. 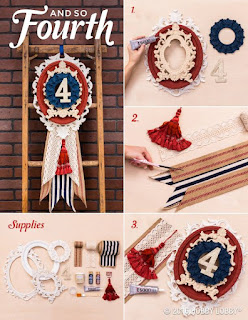 Here is a picture that Hobby Lobby had posted. I thought you might want to see where I got the idea from. I would like to have a tassle hanging down but I didn't have anything handy to make one and that is why I opted to use the red velvet ribbon on the project.