As many of you know I go through spurts of designing layouts and then I don't get around to using them until much later and the other night it sure came in handy! My Goddaughter Amber had asked if I would help her decorate two 4x6 pages for some kind of birthday scrapbook for one of Chi-O sister's birthday that she and the other girls would be doing and I told her I would help her. Of course in my mind I was wondering what kind of decorations could be used for a 4x6 scrapbook! I had forgotten about the project until Amber came by the night before she needed it, which she is famous for doing, and asked me about it. After she showed me some examples I told her that the pages were 12x12 and the pictures were 4x6 and her reply was "oh I didn't know, but whatever, it doesn't matter". *okie sighs in exasperation* Those who don't scrapbook just don't get it do they?! 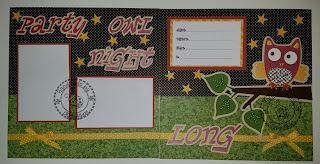 Luckily I remembered the  Party Owl Night Long layout that I had designed back in 2013 that had an owl on it and talked about party so I quickly opened it up in Make The Cut and showed Amber and she said it would work just fine.

I was going to cut all the pieces and leave them for her to put it together but Amber gets distracted easily and isn't always the best on realizing how much time this stuff takes so I did go ahead and put it together for her and all she had to do was pick it up. Besides, the girl works two jobs right now and time is precious. I will give her props for helping me pick out the paper for the layout. 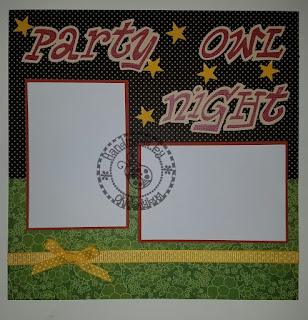 For the stars I just used a punch because it would be faster. After I looked at the picture I remembered she wanted both of them going portrait but OH WELL TOO LATE NOW and she never mentioned about it being turned wrong. The patterned papers are from Graphic 45 Mother Goose collection and the title is done in some Bazill Bling cardstock. 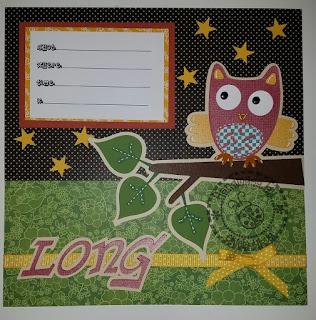 Since some may not know *and okie wonders why just the regular joe would know* the owl is the mascot of the Chi-Omega sorority and that is the reason I thought this would work for her purposes.

I added the ribbon along the bottom as an after thought because it just looked too dang plain without it for my taste and Amber wasn't here to tell me not to use it *okie cracks up laughing*. The yellow and red of the owl are also with Bazill bling cardstock.

Amber was pleased with the layout but she is really easy to please.

I am so glad I do a lot of designing of files because I never know when they are gonna come in handy!