My daughter seems to think I never make her cards or anything else so I wanted to make sure this Valentine's day she had something made by me *okie swears she makes that kid stuff and the kid just doesn't remember*. 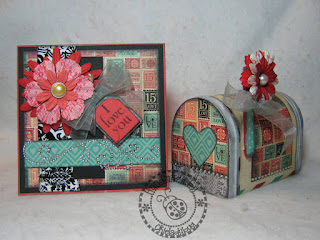 I had plans for a grand card that had great elements on the front and on the inside and that all went to chit when the glue made the papers wrinkle and into the trash it went and I had to hurry up and come up with something else. Even though I used some scrap pieces to do the card and mailbox, to tell ya the truth, I think this one came out better anyway! 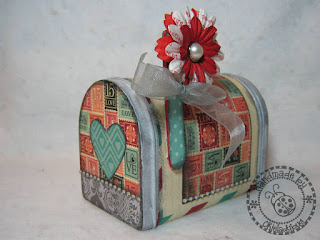 The mailbox is one from Target that were available a few years ago. I had my friend Carmen pick me some up and send to me. I haven't used many of them...yes it is the dreaded "but if I use it I won't have it anymore" disease!

I did ink the white metal a bit to help take down the starkness of the white. I could have used a pink or red mailbox but neither color looked good with the papers. 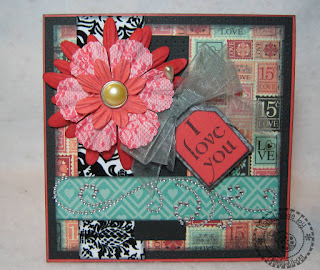 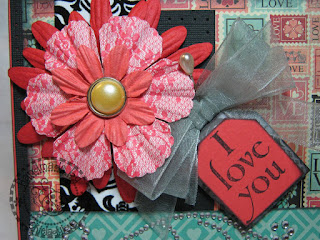 I don't generally break out the pretty Prima flowers and nice pearl brads for cards but this time I made an exception. I added mounting foam between the bottom layer and the middle layer and also under the bottom layer, I really wanted dimension didn't I? I also foamed the layers on the tag. The stamp was one I have had for a long time and I have no idea who made it, maybe Sugarloaf. 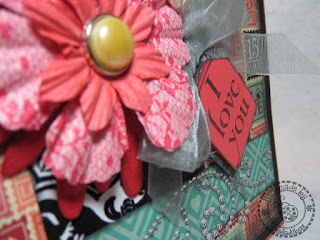 You can see a little of how dimensional the card is in this picture. I used a stick pin to attach the bow to the tag, just pushing the end down into the foam. Stick pins are another thing I like to use but rarely do because it makes a card too thick to mail, heck makes them hard to even fit in a regular envelope!

My daughter was thrilled with her card and mailbox. I guess maybe she has been a sweetheart lately since Chuck and I both went to great lengths to make sure she had handmade cards this year!
Posted by okieladybug or okie_ladybug