I told Chuck a few weeks ago "Hey, ya know you should make Shiane a Valentine's Day card. I know it would mean a lot to her" and he said "I could do that". Of course trying to time when to make it became a problem because one night we had planned on finishing it and she got off work early so we had to wait until the night before for him to finish it up! 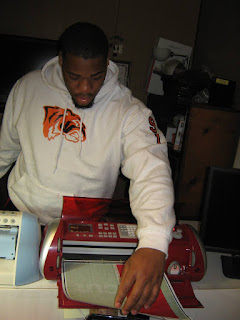 I was quite proud of Chuck. I gave him my drawer of Valentine paper and he picked out the paper he wanted to use and what he wanted to have on the card. I did find an image on the internet for the birdcage, well actually several but the one on the card is the one he chose. While I did work the Make The Cut Software, Chuck did all the loading and unloading of the paper and taking it off the mats. I told him he could do it all but he said "we will be here forever" and he was probably right.

He knew exactly what tools he needed to get the paper off the mat and to punch paper out on some of the images. He has either been around long enough now and watched me use the paper cutting machines that he does really pay attention, or is just use to seeing me use different things for the same purposes over and over that he remembered. 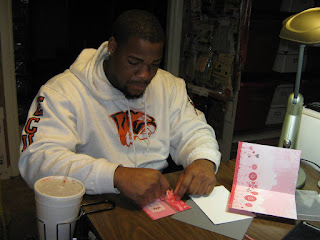 Here he is adding ribbon to the card for the birdcage to hang from.

He was very good paying attention to detail and while I did give him a few suggestions, like using ribbon instead of rope, he did a wonderful job of putting elements together. I am beginning to wonder if maybe he doesn't just come in and hang out in my craftroom when I am not home and wonder what all he could make! 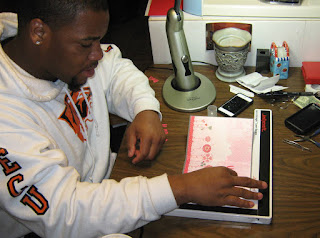 Oddly enough Chuck was the first to use my Kellycraft Laser Square! It was really handy in being able to line up the letters he was gluing to the inside of the card. I did see a few things that I will have to figure out on it, like how to keep the paper from sliding around or the square moving, but that can be reviewed at a later date. 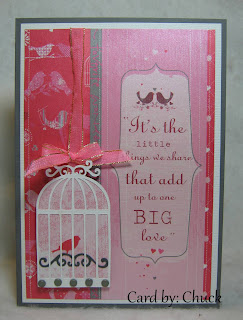 Here is the finished product!! The paper is from Little Yellow Bicycle. Chuck liked the saying on the paper so we measure and cut it so the saying on the paper could be featured on the front of the card. Getting the papers even was a little difficult for him, as he said "my fingers are too big" but he was very patient and got the papers down rather nicely. I was going to suggest inking the edges but I didn't want to send the poor boy over the edge. 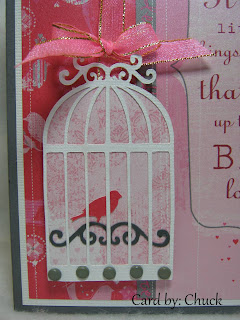 Chuck came up with the idea of letting the birdcage "hang free" and that was easily accomplished by taping the ribbon between the birdcage and a piece of paper on the back. We added brads along the bottom to add some weight and help the cage hang better. I will admit I made the bow but he did attach it! 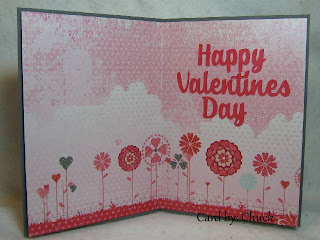 Chuck found this piece of coordinating paper in my stash and wanted to use it saying "I think it will look good to have the flowers going all along the bottom". Now ya'll tell me he doesn't sit in my craftroom while I'm gone!!

My daughter was impressed and at first didn't believe he made the card. She said "the first thing I did was flip it over and look at the back", of course she was looking for my stamp I use on all the cards I make LOL. I had written "handmade by:________________" and had Chuck sign his name and put the year so she can always remember and treasure that he took the time to make her a card with his own hands....and best of all, we got the pictures to prove it!
Posted by okieladybug or okie_ladybug