Everyone seems to be doing the split letter's with the names in the middle of the letters these days, not even sure what they are called but I will just call it "Split Initial Name Frame". Well, I decided I wanted to do what everyone else was doing, because I am such a follower of others and all and decided to make one for my sister and brother-in-law.

I asked for and was given some files of split letters but they wouldn't open in MTC for some reason so I had to use my noggin and figure out how in the heck to get the letter to split. I got the K, in the regal font, up on my screen and then used the snipping tool to save the image. I then opened up Windows Paint and opened the image where I used the selection took to take out a chunk in the middle of the K. I saved the letter and then did a pixel trace in MTC and cleaned up the image and was able to split, join, break and all that good jazz until I got it how I wanted it. I know it seems like a lot of work and it probably was but now that I have it figured out I can likely do it a lot faster next time. Okay, there is no likely about it...I will be able to do it a lot faster!

I got a frame from the local bargain store for this project and looked for one that was a little elegant looking. I really wanted it to be matted as well and so I think I lucked out! 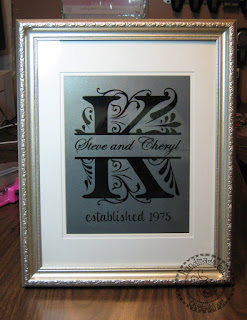 I will tell you that the first time I cut this I messed up. I read my ruler wrong and had it too tall and narrow, good thing I had plenty of vinyl! Oh and that is one reason I don't believe in buying vinyl in sheets...only rolls...always order rolls! After the first mess up I remeasured and got it right!

I debated about putting the established in the middle of the letter with their names but then decided it looked better at the bottom.

The kids and I went to see my sister on Saturday and I took her this little gift and she absolutely loved it! Now I need to think of some other worthy couple's so I can make some more of these!