Chuck, if you might remember, is from Mississipi and wasn't able to go home for Thanksgiving so he ended up spending another holiday with our family. At this point I think it would be okay with the family if Shiane or I weren't present as long as Chuck made it *okie isn't quite sure about her families judgement at this point*. I thought it might be nice to make something he likes to take to dinner. He said that his sister always makes Sweet Potato Pie and that is what he misses. Aunt Betty usually makes stuffing, that Stove Top kind, and Shiane and I prefer cornbread dressing so I made that as well. Shiane always gets her Cherry Cheesecake for every holiday and has since she was a baby, this year was no different.

The recipe I used called for boiling the sweet potatoes and I would have rather used canned but I wasn't sure about the amount so I stuck with the recipe. While it was a bit time consuming it wasn't a difficult pie to make at all! I say that, but I did run into a bit of  a snag. I was doubling the recipe and was mixing the ingredients together then *SQUIRREL* happened and I got distracted. When I went back to finish I added twice the amount of butter that I needed. Luckily I did have enough sweet potatoes to cover the mistake and ended up with 4 pies instead of 2.

The snag came when I only bought 2 pie crusts at the store! I sent the kids to the store and I told Shiane to get the crusts in the pie tins. Some how our wires got crossed and she brought me two pie tins...no crust. Rather than have them brave the crowd again I decided to make homemade crust. I was on the phone with Linda and she said "do you even have flour in your house?". She is such a smart azz sometimes! 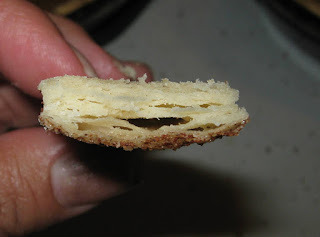 Anyway I told her that I use to make pie crusts all the time when I was growing up and I could always make a good flaky crust.  As you can see I still have that touch! My friend Wendi came by to pick some stuff up and I had her taste the crust and she thought it was quite tasty. My mom always rolled out any leftover pie crust, spread butter on it and sprinkled it with cinnamon and sugar so of course I do the same! 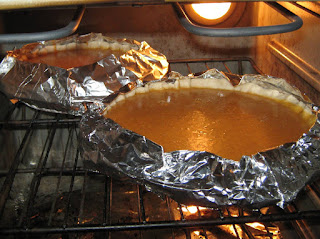 I did tell Linda "well I do know how to cook! I even know to put foil around the crust so it doesn't burn! Now that I am older and I have a *SQUIRREL* problem I just have problems remembering to take the foil off so the crust can brown. Luckily I was able to remember this time but, let's be honest...we really don't know if I will the next time! 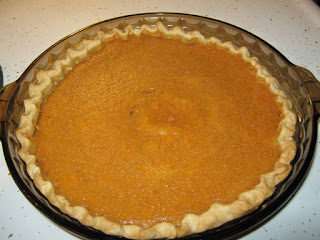 I think my pies came out quite beautiful! Linda kept telling me I was going to have to let Chuck taste test the pie and I told her that he could wait until the next day for Thanksgiving. Actually I just didn't want my beautiful pie to be cut HA HA HA. 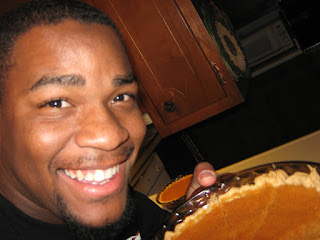 When I went to upload the pictures to my computer for this blog post I found this picture of Chuck sneeking a pie! He laughed when he found out that I saw the picture and said "well you said I couldn't have any so I was just showing you I could!". *okie sighs deeply and shakes her head* I am just not real sure there is any hope for that boy! At least he did say my Sweet Potato Pie was good and I reckon it is a good thing I made 4 because he is still enjoying pie! I didn't tell him until after he tasted it that I never made Sweet Potato Pie before...don't think he would have known if I hadn't of told him.
Posted by okieladybug or okie_ladybug