And I am gonna love it! This is not a cart I would have went out and purchased since I am not big on skulls but since it mysteriously appeared on my door step a few months ago I figured it was meant to be in my collection. 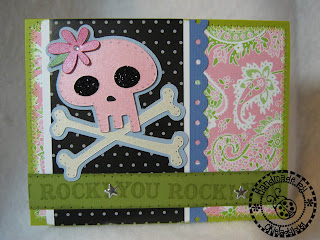 *okie thinks this is a terrible pattern in her life*. I was home alone Friday night after a pretty stressful week and I decided to play and some how Rock Princess appeared on my Design Studio screen and here you see the results!

The sentiment across the bottom of the card is done with a Versamark pad and the stamp is from Stampin Up!. I added some heat set stars to help make the sentiment stand out a little more. 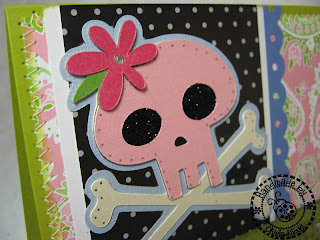 tell ya it is a complete beech to try and photograph! Since I am not a professional photographer, nor do I play one on tv, the shimmering shine reflects the light and the true colors are hard to capture.

I did cut the top layer skull out twice, once with the pink and then once with black, hiding the contours of the eyes and nose. I used a Quick Glue pen to color in the eye area and then applied black Doodlebug glitter. I added a few doodle dots around the skull and at the end of the bones just because I can *okie cracks up*.

My daughter really liked this card so it likely won't stay in my card box long. I think I might need to find a new hiding place for some of my cards!!
Posted by okieladybug or okie_ladybug

Email ThisBlogThis!Share to TwitterShare to FacebookShare to Pinterest
Labels: A2 Card, Rock Princess