I am finding that tags are easy and fast makin's *okie wonders who is going to question the use of the word makin's and decides if they are from Oklahoma they won't* for some great cards!

I honestly can't remember where I got these tags. I know someone 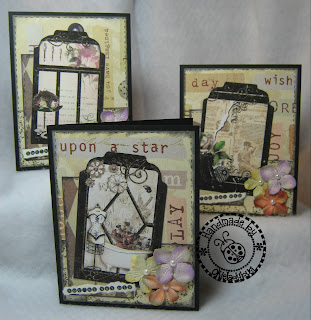 sent them to me and I wish I could remember who! Anyway there were quite a few sent and I was able to come up with 3 sets of 6. The sets have similar designs but are still different. I will be posting more later this week.

The background patterned paper is K & Company Maison stack. I have used this stack for quite some time and still have over half the pack left. I just love this paper! There are actually 3 different patterns of paper used, but you might not be able to tell in the picture unless you click and make it bigger.

I added some Prima flowers to the front corner and then some flat back pearls for the flower centers. I printed my 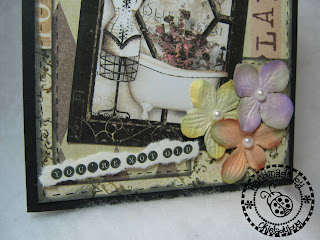 sentiment using MS Word and then simply tore it out for the aged look *okie wonders if it might be the tacky look*. I believe the font I used is called TypeSet or something similiar. If you see it close up it actually looks like the old fashion typewriter keys. Click the picture so you can see it better...I'll wait right here....*okie sits with elbow on desk and chin resting in the palm of one hand, looks at her finger nails on the other hand and thinks she could really use a manicure*. Oh okay your back...so what do ya think? It looks like the old typewriter keys doesn't it? SEE! I TOLD YOU!

I did the inside with the same font. I crumpled the paper after I got it 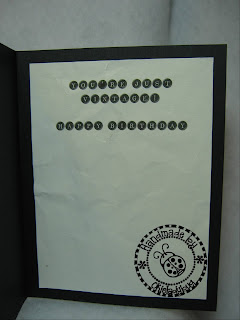 printed and trimmed for the inside of the card. I was going to use some Distress ink but then decided the two colors I had wouldn't work so just left it plain with no ink.

I love this sentiment on the front and inside of the card. I would send this to my friend Linda, aka LGuild for her next birthday but I think I will change the sentiment to "you're not vintage" and on the inside "your azz is just old!". So what do ya'll think? I think she would love that! *okie smiles sweetly and innocently as a 2 year old asking for a lollipop*.

I'll have another vintage looking card tomorrow!
Posted by okieladybug or okie_ladybug