I was browsing Facebook a few days ago and a lady was asking how she could get layers in the flourish Santa that has been around for a few years and since I wasn't doing anything I told her I would break it apart for her. 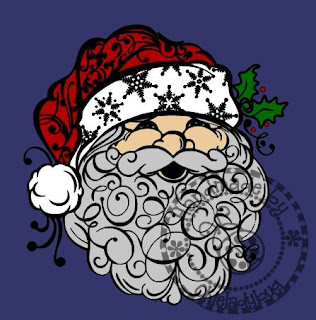 Well it took longer than I thought because I couldn't figure out the best way to have it layered so it would be easy to use with HTV (heat transfer vinyl) and then I decided the "knock out" method would be best so if one wanted to use glitter HTV and regular HTV for the image it could be done.

Here is a picture of the Santa with all the layers in place. I colored the beard grey for the picture so you could see it is a different layer than the hat and ball, which are not joined either so if you wanted to cut those out of different colors you could do that as well. 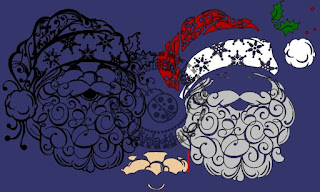 Here is a picuture of the layers apart. If you're new to this HTV thing you would press down your black and then just fill in the colors in any order you want. This keeps the image from being too thick and like I said if you want to use glitter HTV it is a lot easier this way. If color layers were solid those would have to go down first and it would be difficult to get the layers lined up.

I said I was starting to charge for my files but this one is free since it is not my original design.