Like I said yesterday, Carmen and I had both ended up choosing to use the Graphic45 Le Cirque papers. When discussing this coincidence we both had decided to use it for the same reason...we both had so much of it! It was another one of those rare Tuesday Morning multi-pack finds that us papercrafter's so love to come across. Thank goodness I did have plenty since I made 4 of these stinkin albums! I curse my need to make multiples of projects!!

While Carmen used the "un"circus sides I decided to embrace the Circus theme and try and make an album that didn't necessarily make the owner feel they had to put circus photo's in the album. The title "Life's A Circus" was perfect for this project. All the white cardstock pieces are to be used for "photo templates". I never know if the recipient of my album will be a scrapbooker and know to measure the area so I find it easier to just cut cheap white cardstock and put it in place where the photo goes and then they can just lay it over the photo, trace around it, cut it out and put it down. 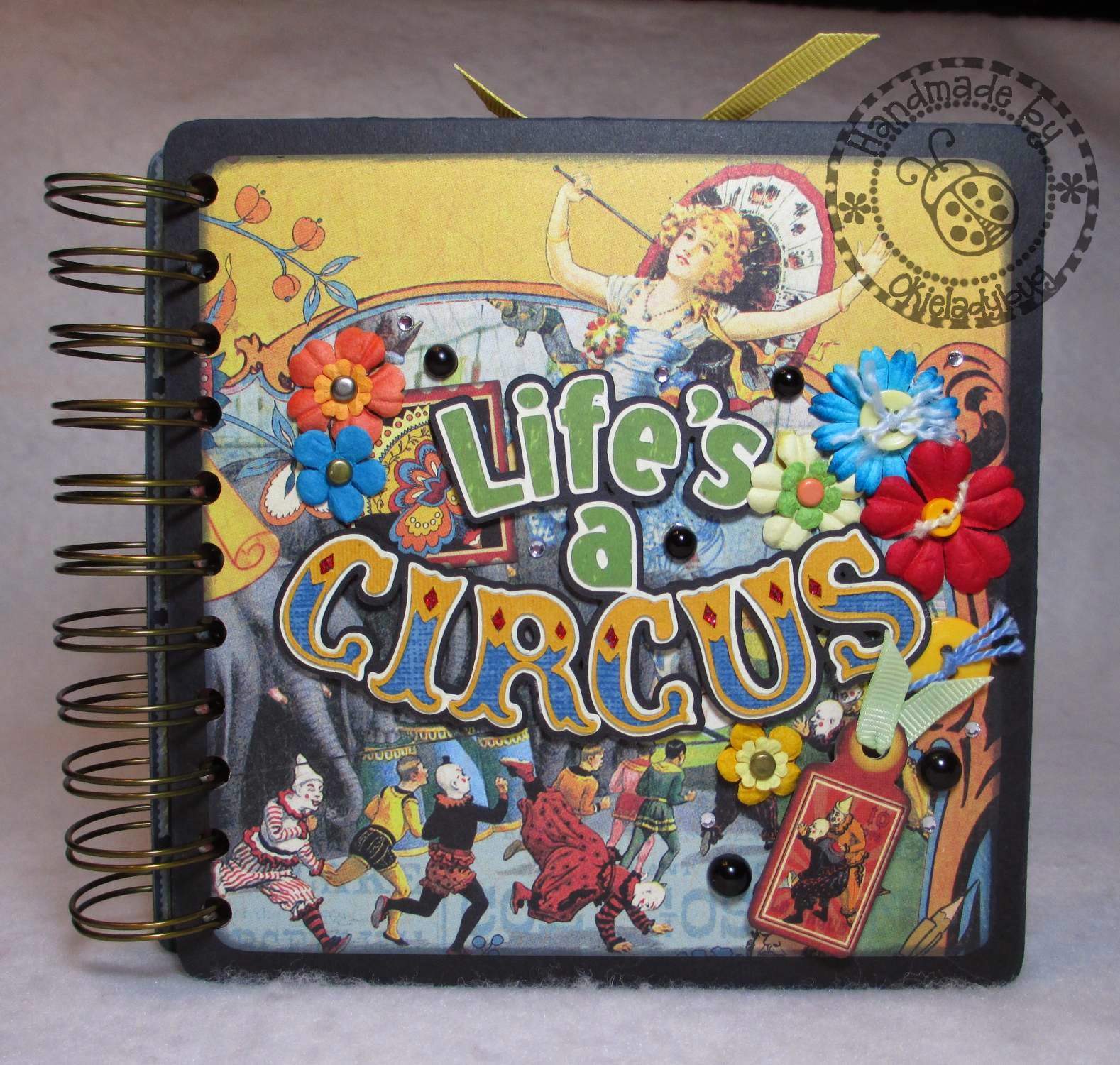 When cutting the word Circus I was worried about the top layer and the fine lines but my champion cutter, Pazzles, cut it beautifully. I added some red stickles in the diamond cut outs to dress up the word a bit more.

I cut up one of the BIG PICTURE pages in order to get what I wanted on the front, ya know the gorgeous pages that we all hate to cut up. For embellishing I added flowers, flatback pearls, rhinestones, brads, buttons, ribbon and twine. 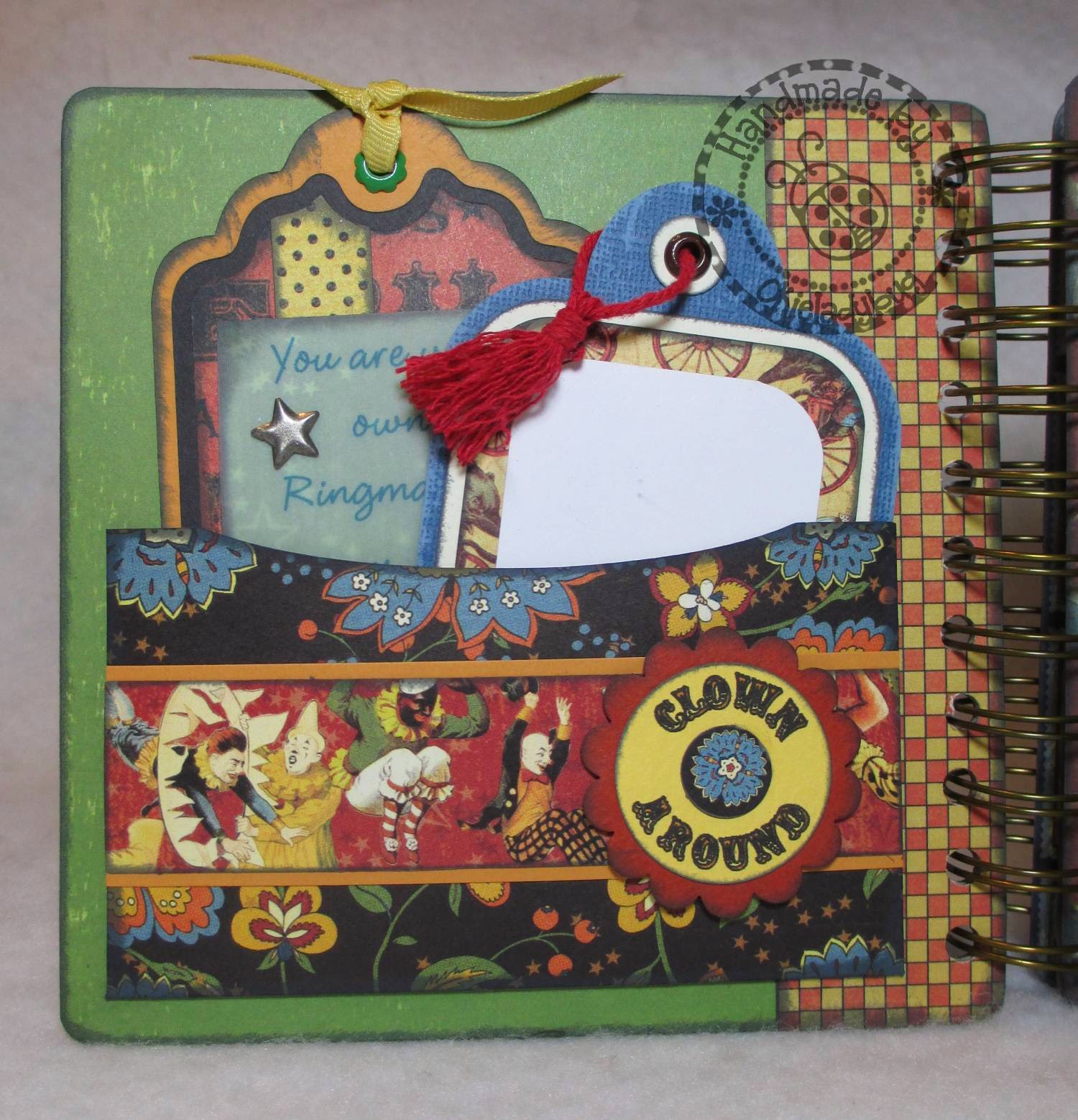 I did a google search or life's a circus to see if I could find something I could use with the album and was lucky enough to find a page where life was compared to a circus. The saying on the tag reads "You are your own Ringmaster. Take the whip and be in charge of this crazy circus we call life". The other tag can be used for a small photo. The "clown around" was done with Microsoft Word Word Art and the little center piece was from a punch out page. 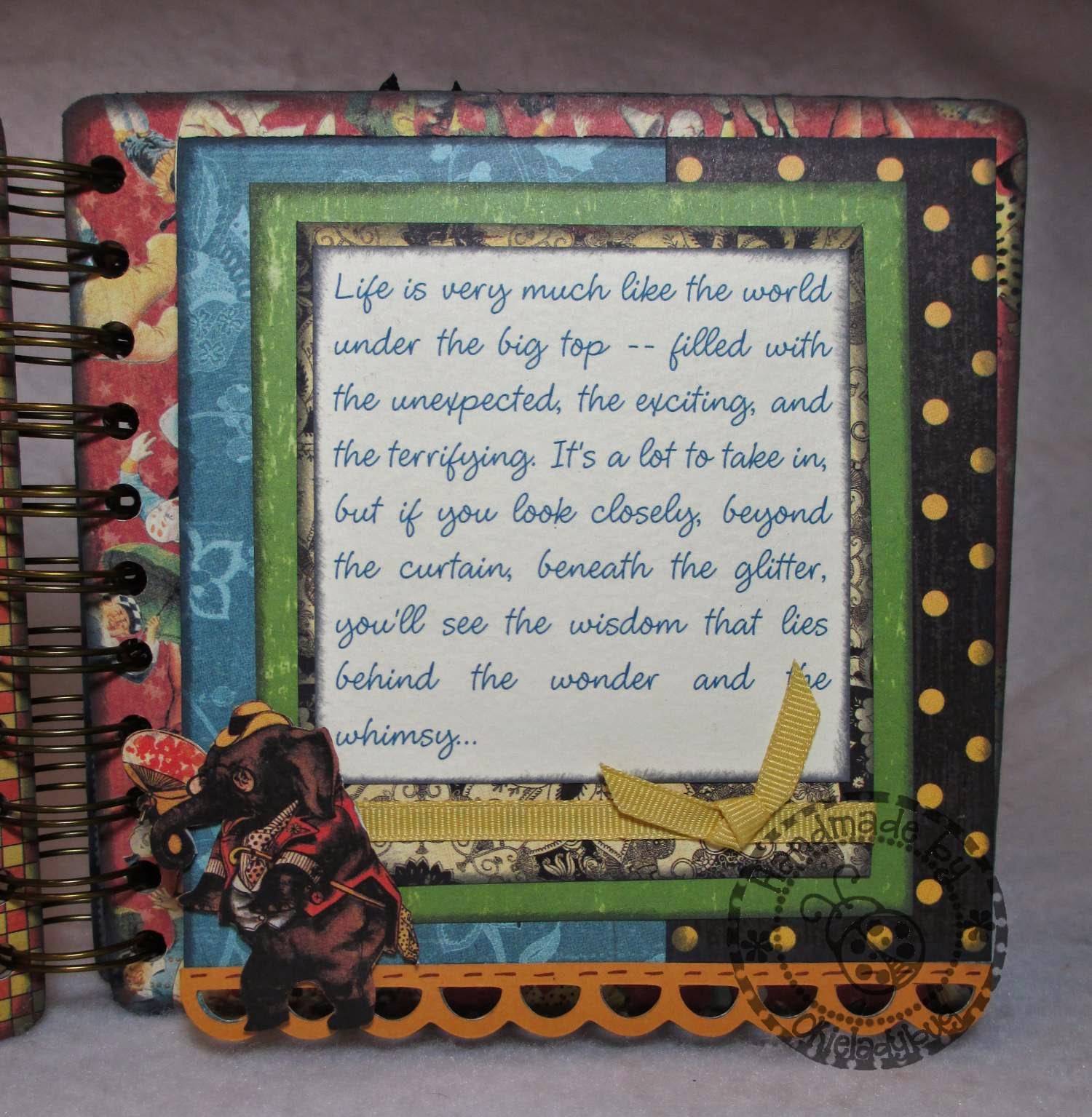 This quote was another I found during my google search and I thought it was perfect for the beginning of the album and I didn't mind sacrificing a photo placement so this could be used. You might have to click the picture and make it bigger to read. I cut the little elephant in the bottom left hand corner out by hand as once it was done I felt it needed a little something else. 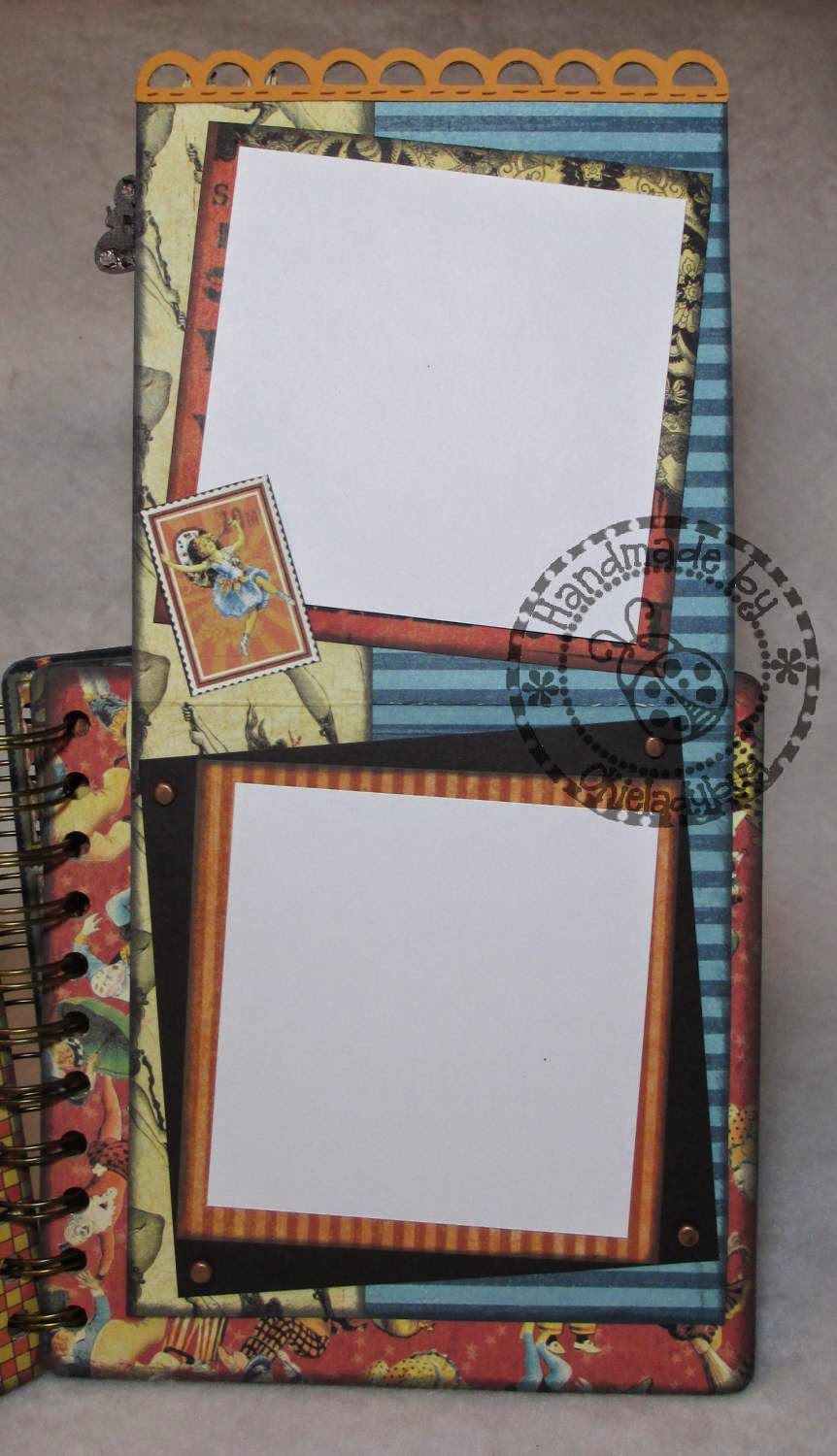 Here is the first flap page of my album. I scored directly in the middle and then adhered the bottom to the chipboard page. I'm still not sure I explaining it correctly so ya'll can understand how Carmen got 4 pages out of a flap page instead of 3 but I hope you can understand. The little postage stamp is cut from a full sheet that is decorated with different images but all are postage stamps. I used them in other places in the album as you will see. 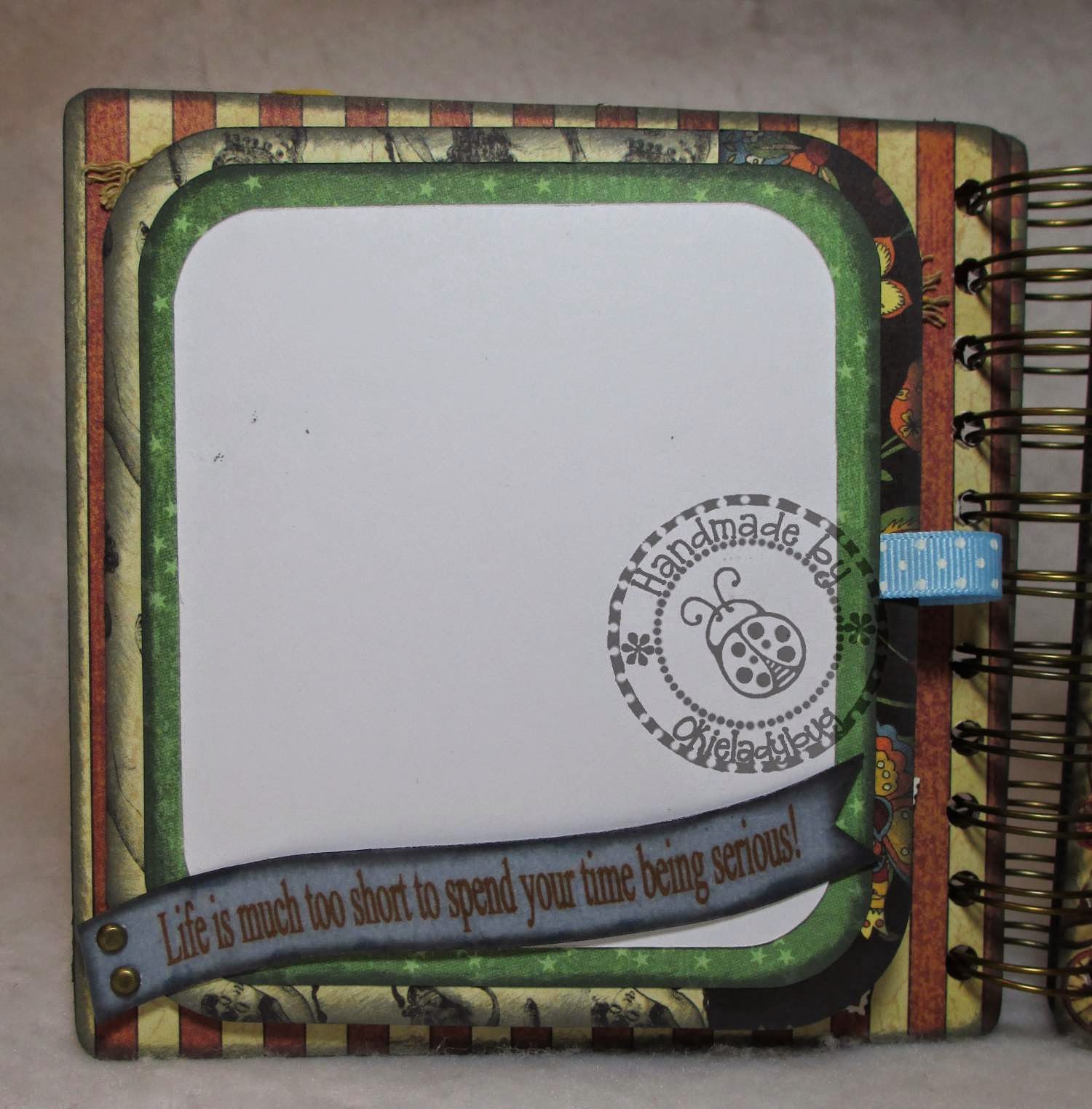 The banner for this page was cut by hand and was printed with Microsoft Word Word Art. Yeah I know, I hate cutting by hand, but it's not like I had much of a choice right now...at least until I get the new Pazzles Vue and figure out print and cut on it. The banner is only attached on the far left hand side so a picture can easily be placed behind it. It might be hard to read in the picture but it says "Life is much too short to spend your time being serious!" 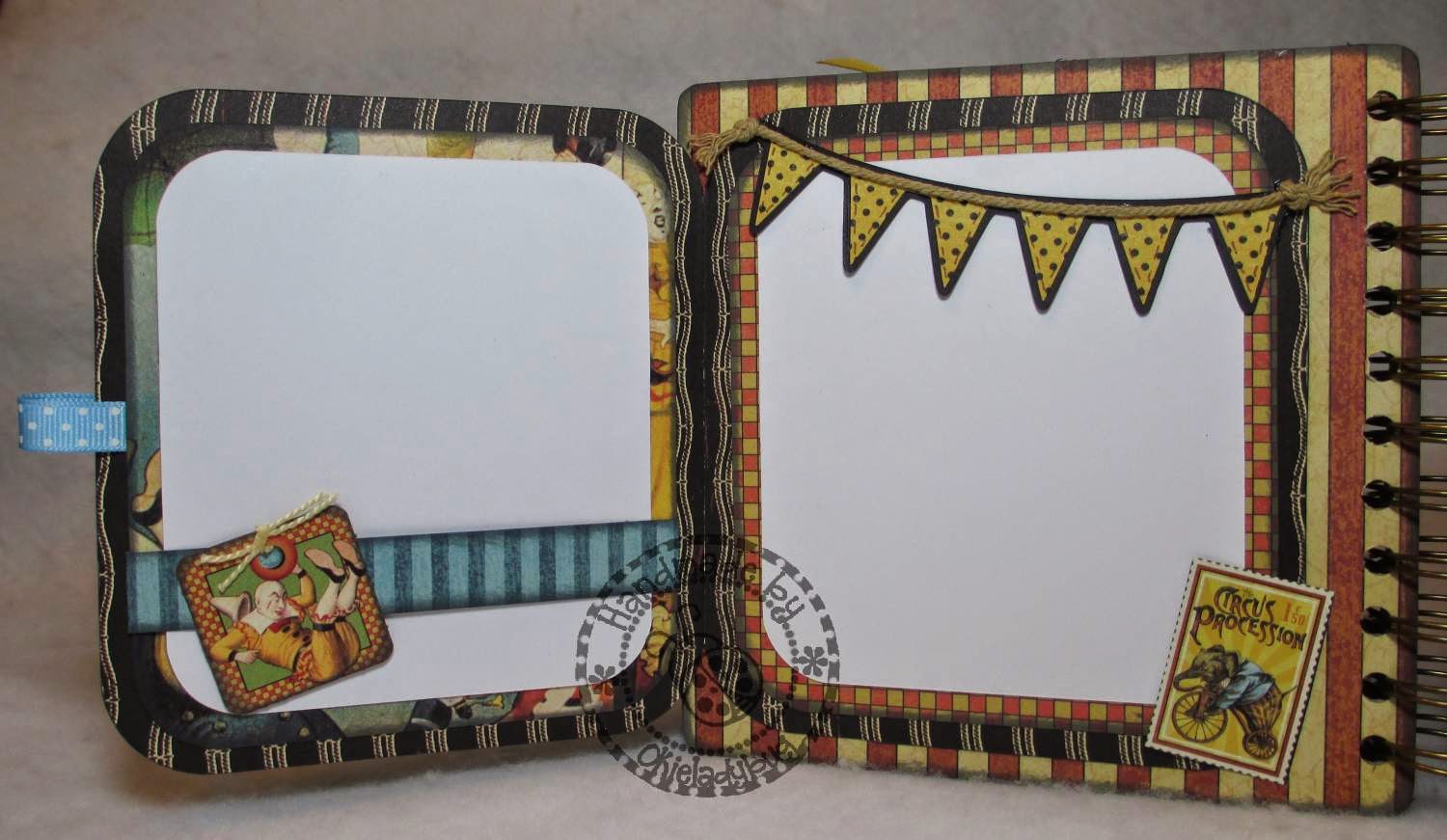 Here is the inside of the second flap page. I really tried to keep the embellishment minimal as I didn't want the book to be a foot thick so I did decorate a lot with just paper. On the left hand side that is just a strip of paper with a punch-out tag. Now on the right side I couldn't resist using some Maya Road cording across the top of the flag banner. I carefully added glue to the paper cut and then added the cording. I tied the knots afterwards and then frayed the ends. 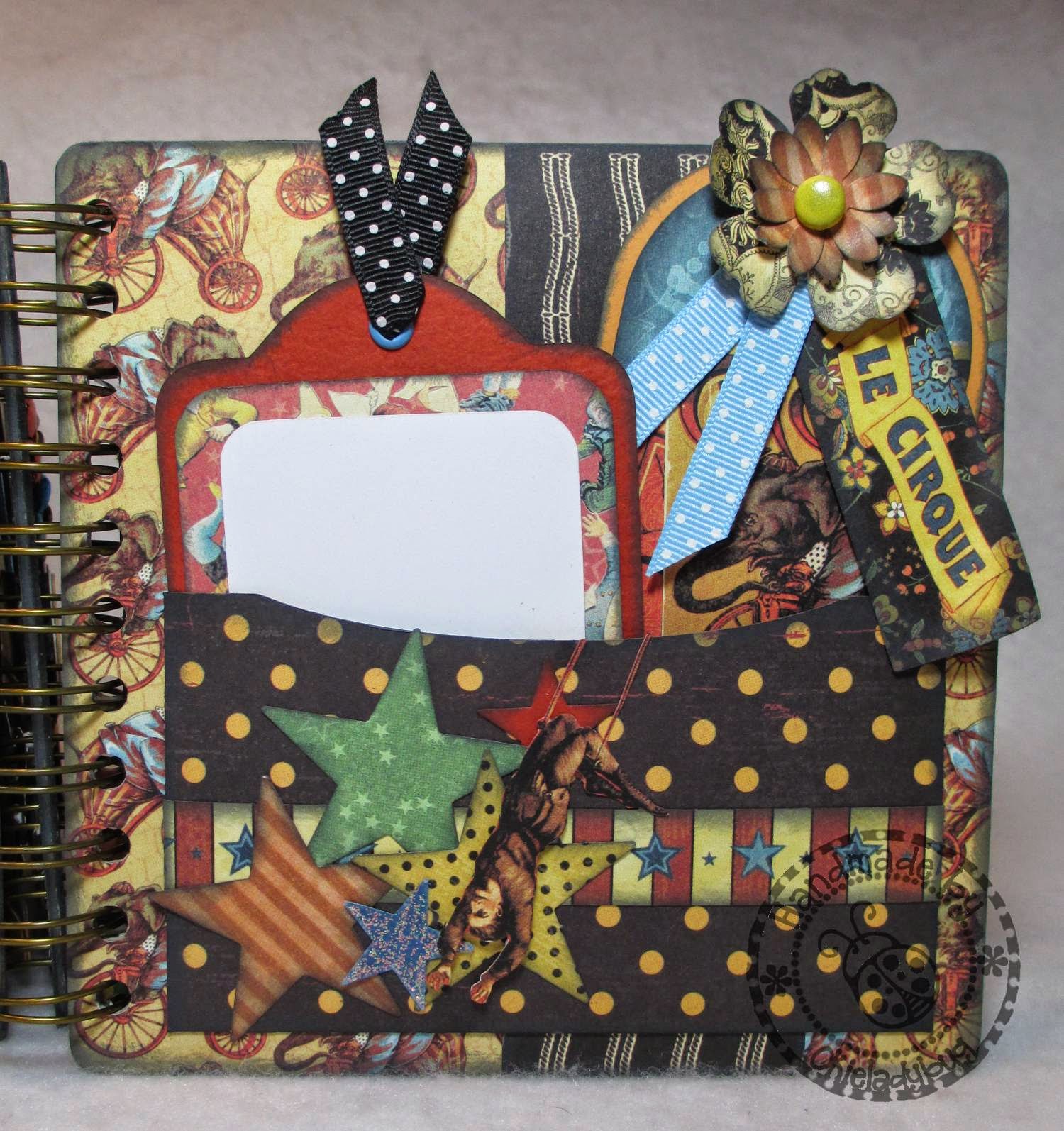 This is the second tag page in the album. By the time I got to decorating the tall tag on the right hand side I was out of ideas since I had everything else done. I finally just slapped some papers on it, added a flower to the top, a piece of ribbon and a little punch-out and called it good.

It's hard to see, but I added stickles to one of the small stars I punched out because I thought they looked too plain. I cut out the little trapeze artist by hand. To attach him I put pop dot under his arms and body and then put glue on his legs and the "rope". 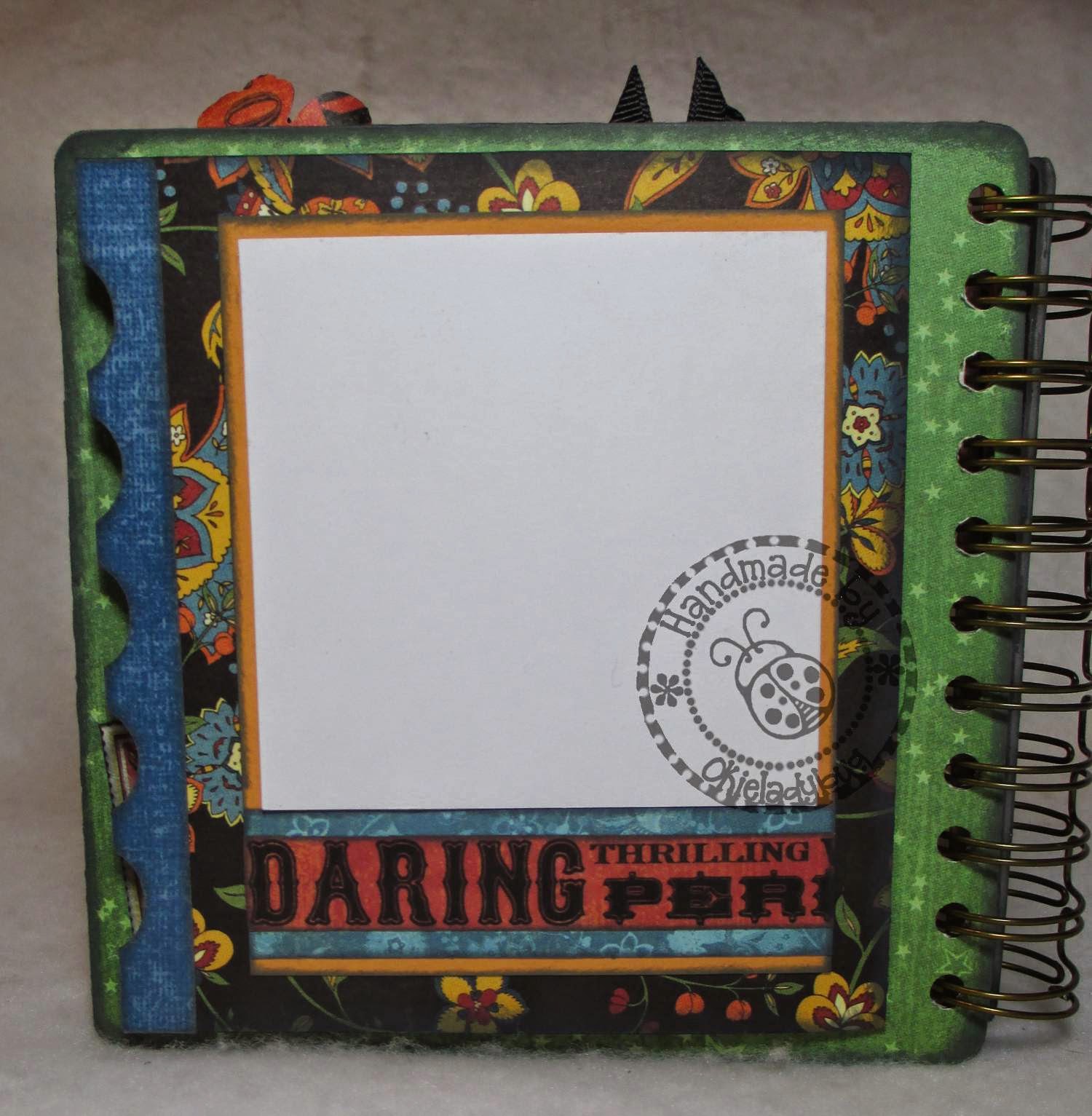 This is the last flap page of the album and I left it a bit plain. I had some border punch-outs with some words and I chose the words carefully so certain words would show. Two of the albums have the "Daring" and the other two have "fearless".

I sometimes forget how much I like Coredinations cardstock but I did remember during this project because I sanded anything blue I used. 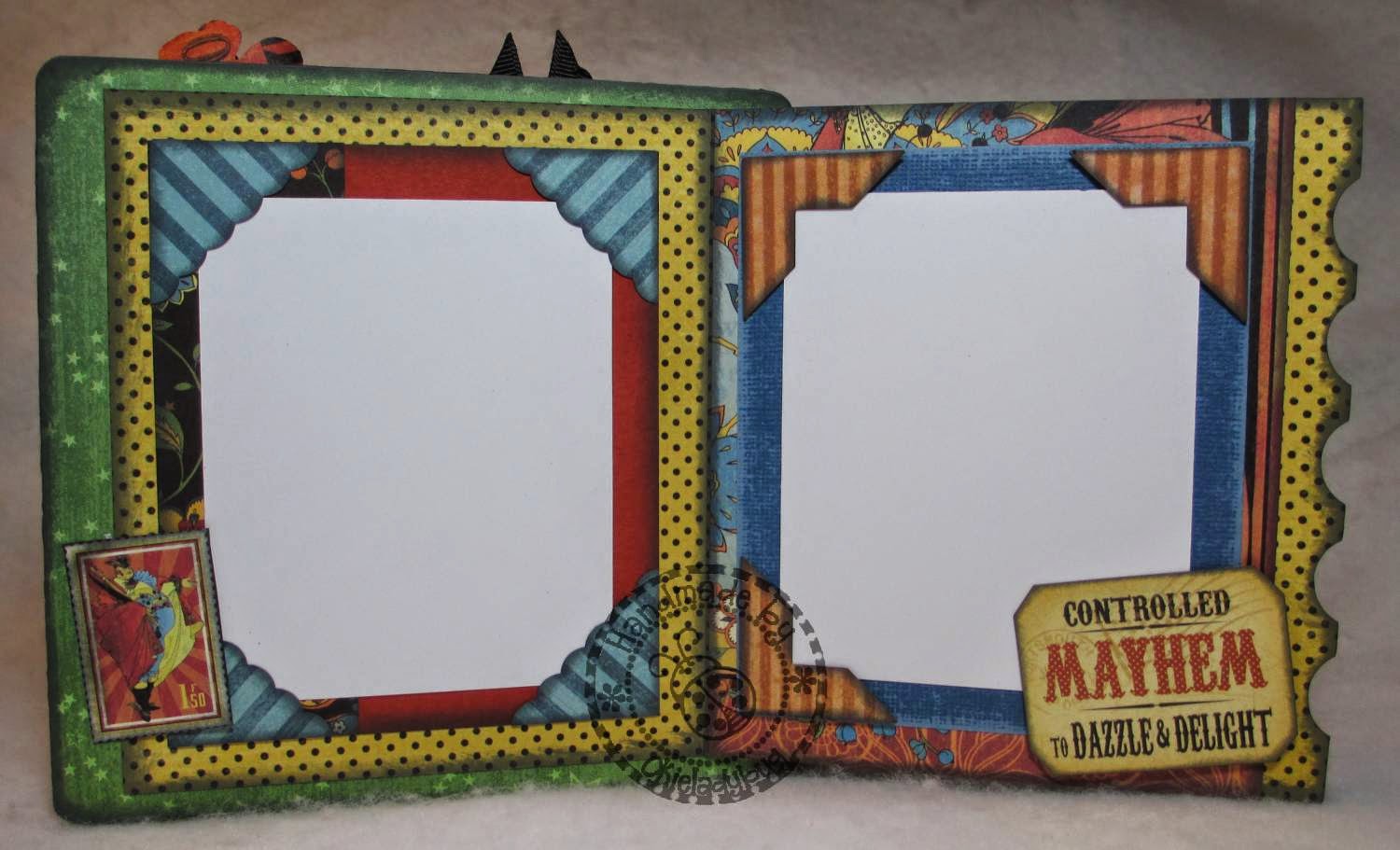 This is the inside of the flap page. Sadly I only had two of the "controlled MAYHEM to dazzle and delight" punch-outs so the other two albums got something not quite as cute. I decided to get out my photo corner punches for these two pages, the ones on the right are pop dotted while the ones on the left are just glued down. 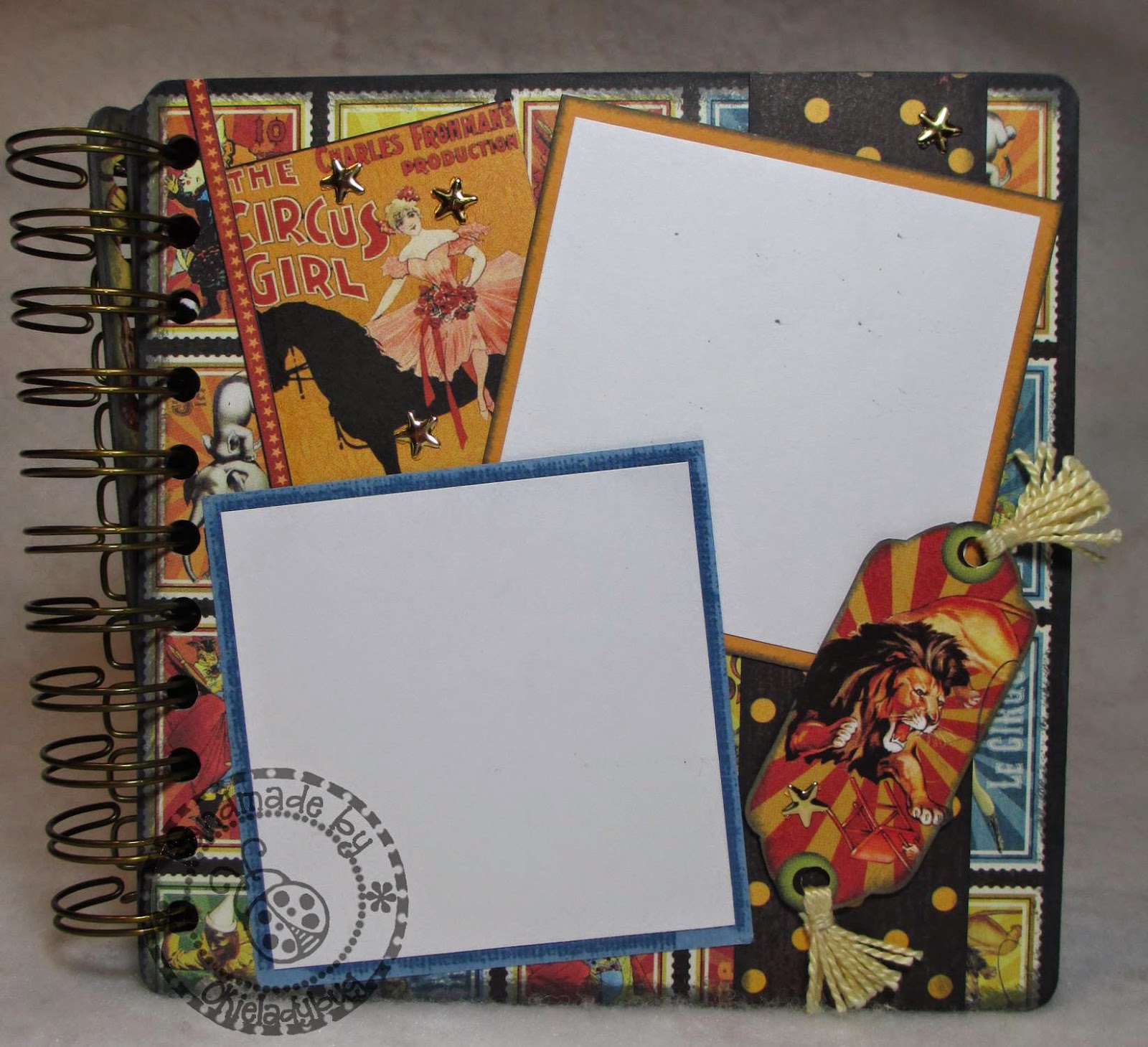 The last page of the album didn't have any special cuts and we could do whatever we liked on it. I opted for a two photo placement and then just found different scraps to decorate. I made the little tassles on the lion punch-out out of some craft thread. I added some little hot fix stars here and there for a bit more embellishment. 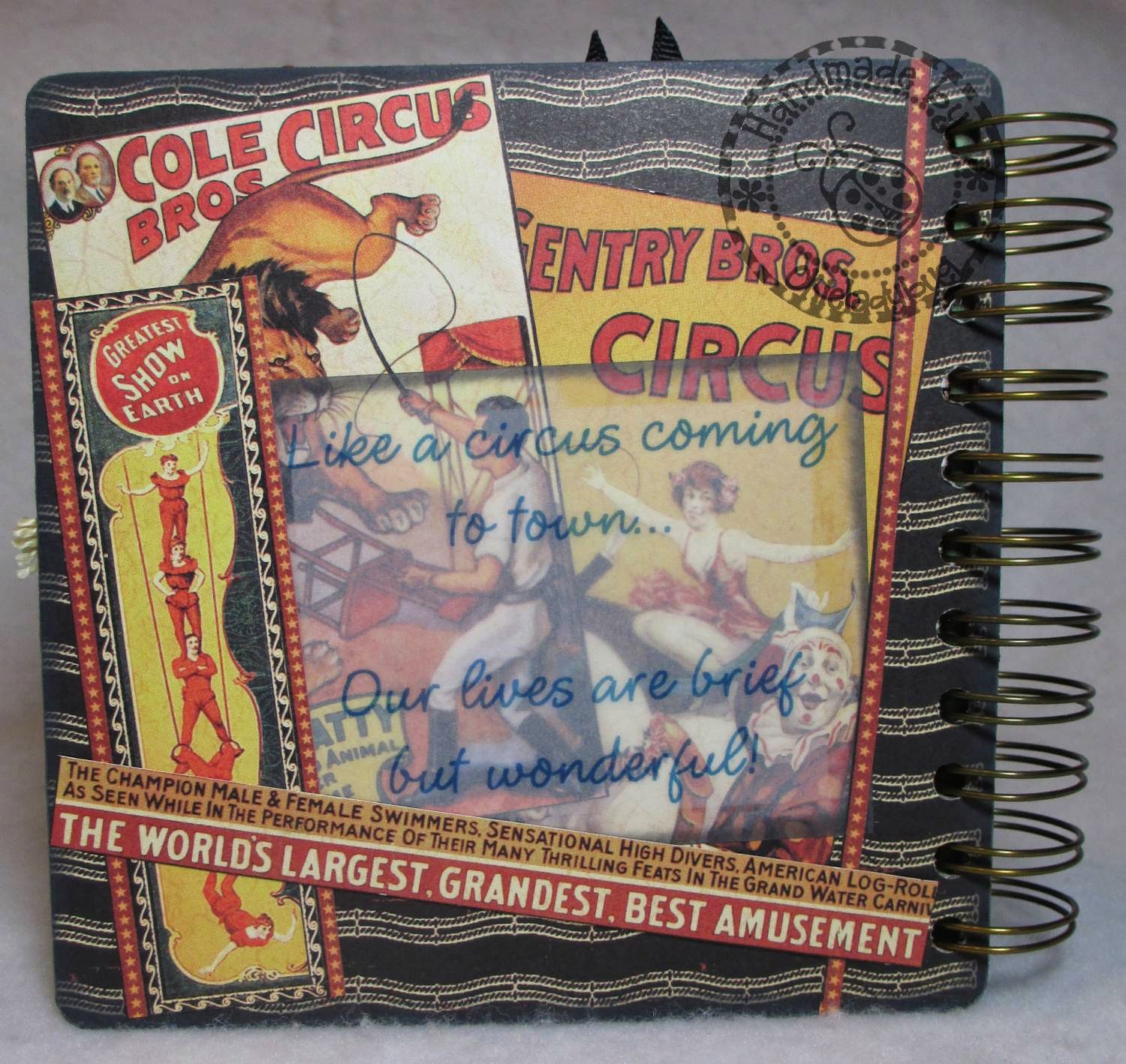 This might be a first for me - I decorated the back cover! I really wanted to use the quote I printed and this was the last place I had open to use it and that is the true reason the back is decorated. I like how the transparency I used still allows the images to show through from the circus posters. 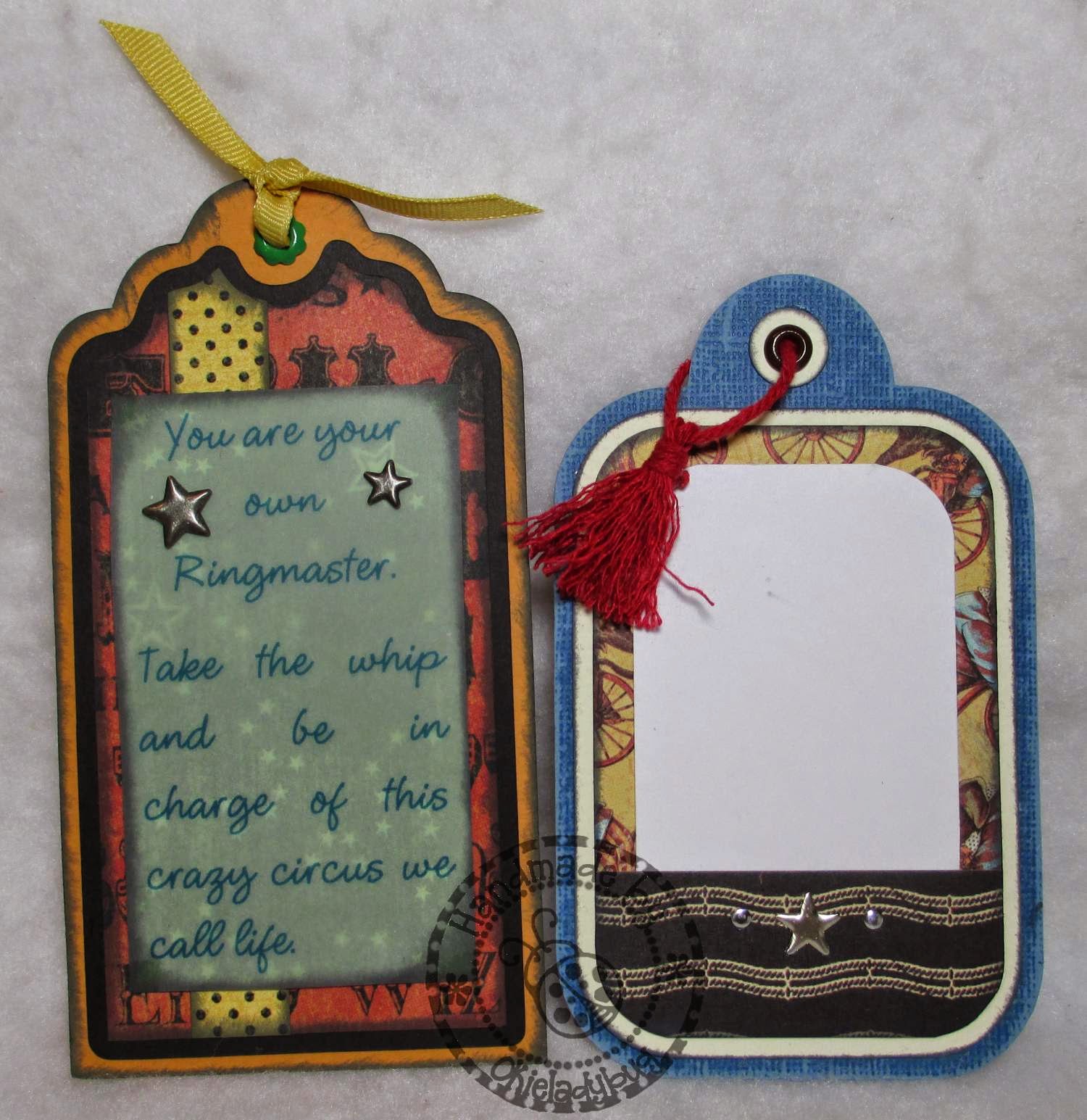 Here is the first set of tags from the album. I printed on transparency for the tag on the left and you can see the green star paper through it just a little. The stars are some brads I had, which I am running out of and need to order more since I love those little stars!

I added a few hot fix items to the bottom of the photo tag just for interest. I made the tassel out of Maya Road cording. 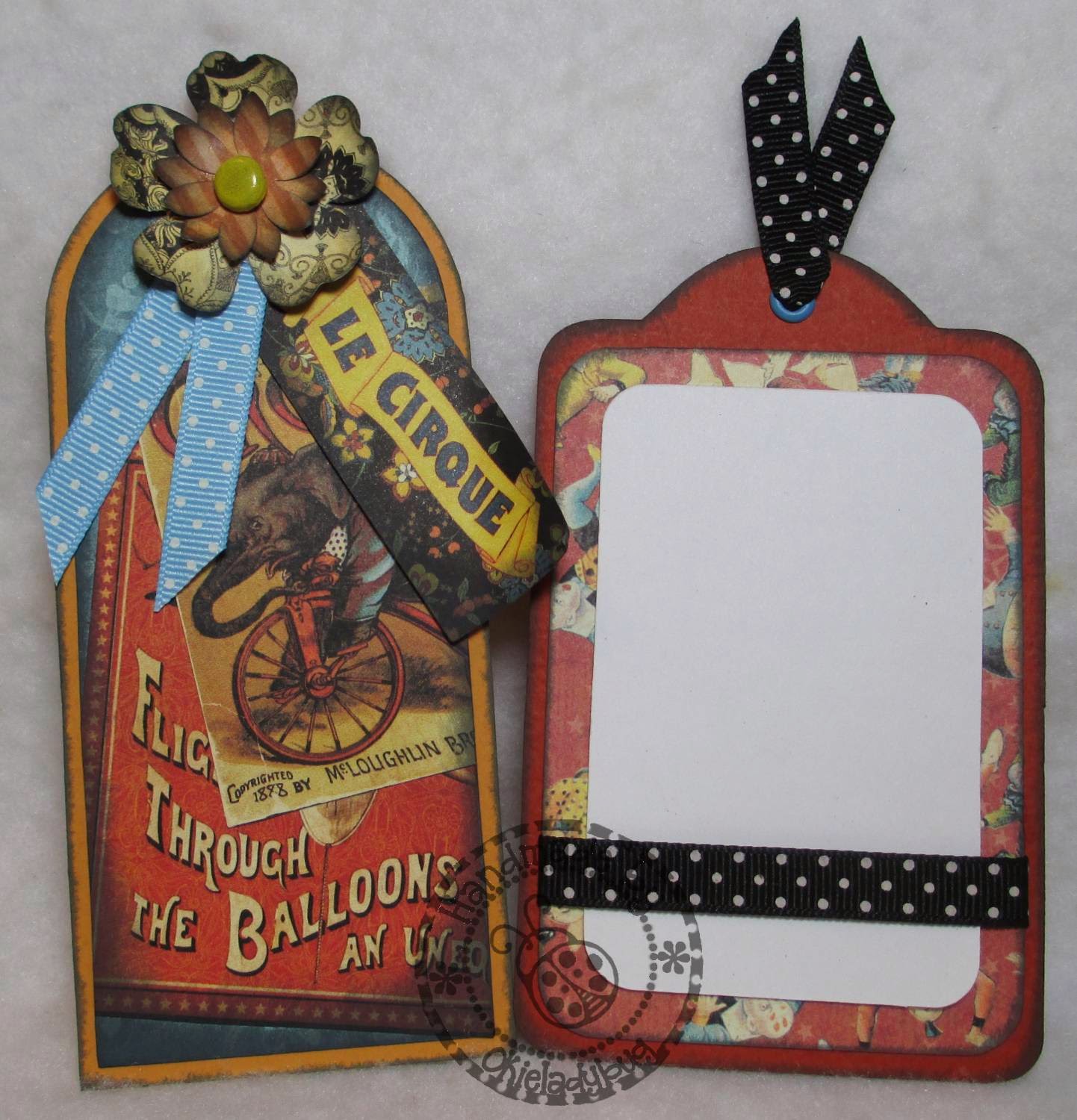 Here is the second set of tags and you can see I was getting tired by this point and just slappin some chit on there. I was going to add some embellishment to the dotted ribbon but it would have been too thick for the pocket so I left it plain. The flower on the top of the tall tag was made with Stampin Up punches.

Carmen and I were both so excited about this project but by the end we were saying "I don't' want to see this paper again for a long long time!". It will be awhile before our next challenge since I have promised my groups we will make birthday cards again. They really love the activity and it makes for some good therapy in the process.

Oh and I guess you can see why I haven't posted in awhile as well. It took FOREVER to make four of these little albums!