Okay maybe that doesn't sound quite right so I should explain. Before leaving for Orlando I posted on Facebook that I would be in the area and asked if anyone in the area would like to meet up for lunch while I was there. After some chit chat back and forth we decided to meet up at The Rain Forest Cafe at Downtown Disney. These gals are new friends in person but old friends from chatting. A couple of the ladies are ones I have chatted with for about 5 years or so and a couple were ones who I have only been chatting with for the last two years or so.

One of the awesome things about Disney World is that people like to vacation there *okie still doesn't quite get the attraction to Disney World but figures to each their own*.  Luckily Jann was there vacationing from Minnesota and Debbie was in from Ohio. I thought all the ladies knew each other and I was quite surprised to find out they didn't really know each other from online. 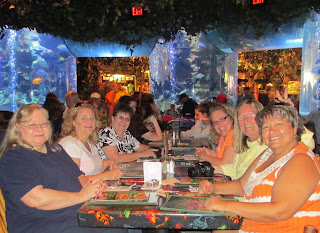 There were a couple of ladies who planned on meeting up but for one reason or another were not able to make it. Those that did make it were Carol, BFF Karen, Diana, Debbie, Jann, myself and Candy. Candy evidently took this picture since I don't see her in it! *okie also wonders where her picture of the group standing outside went to but can't seem to find it and thinks she is gonna have to beg one of the ladies to send her one*. We had a great time at lunch getting to know each other, well okay them getting to know each other since I have been chatting with them for quite sometime. It was really great to meet Carol in person since she and I were on a design team together and we also have had numerous lengthy phone conversations over the last few years. 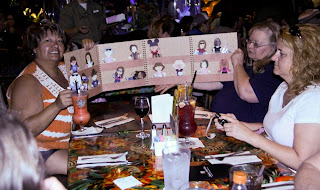 Jann is part of the Night Owls group, which originally branched off from the Cricut Messageboard when it started going down hill. The Night Owls have made Mini Me's that travel with each other and get their picture taken. Jann pulled out the Mini Me's during lunch so they could join us! Cheryl from Oz decided to start drinking my slushy drink! *okie thinks Cheryl is quite the lush*. Notice the little Mini Me who is sideways...well that is Camilla, she had too much to drink before we even started lunch! HA HA HA I couldn't believe all the details the ladies put into their Mini Me's and it was fantastic to be able to look at their handiwork.

After lunch we went outside to visit and ended up spending a few hours chatting about different subjects. Candy was nice enough to let me try her caramel apple pie apple, or something like that, from Goofy's Candy shop...IT WAS AWESOME! Too soon it was time for everyone to go. Karen and I had to go meet her brother and his family over by Legoland, they were in the Tampa area on vacation from Tennessee. 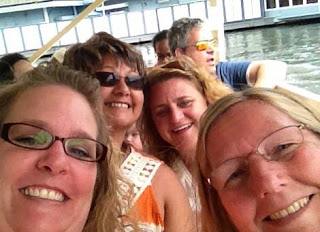 Karen and I had parked on the opposite end of Downtown Disney from the Rain Forest Cafe so we decided to hope on the pontoon with Debbie and Jann to get back over to the parking lot. Debbie snapped this picture of us with her phone during the ride. I looked for alligators but didn't see any, actually quite disappointed in my trip to Florida...not one alligator seen!

I feel very blessed to be able to say I have friends all over the country and even more blessed that I actually get to meet them as time goes on! While I may not be a consumer of Cricut products anymore I will forever be grateful for the fantastic friendships that the Cricut has brought into my life.
Posted by okieladybug or okie_ladybug