Okay I think that is for when you get on a train. Not really sure what is called out to tell everyone to get their butts on a ship...ya think I would know that by now but I guess I am always too busy people watching to pay attention! 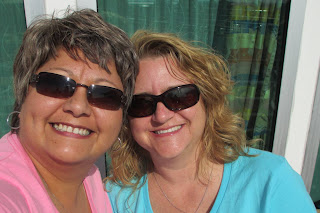 Our first day on board the Carnival Ecstasy was good. It only took about an hour to get from the Karen's house to the port and the lines to get on board went a lot faster than last year. We got several comments/compliments on our shirts and people wanted to know where we got them. Karen was quick to tell them that I made them.

After finding our cabin we went out to explore the ship and have a drink on deck and relax while waiting for the rest of the luggage to make it to the cabin. One of the first things I have to do after getting our luggage is unpack. I figure that way we are good to go for the rest of the cruise and not digging through suitcases to find clothing. Karen doesn't fuss too much about this because she knows I can't enjoy myself until it is done. 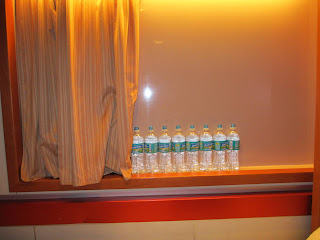 Our cabin was smaller than the others we have stayed in but it was fine for the two of us. We didn't have a mini-fridge in the cabin, which was a bit odd to me and we also only had one outlet by the big mirror. We knew this was an issue and meant to bring an extension cord but forgot to pack it. It wasn't too much of an issue though. We had to laugh at the nice curtain on the wall and then when you pulled it back there was a nice view of...THE WALL! We put our water bottles on the ledge so we could have "a view of the water" HA HA HA. Okay, we are dorks! 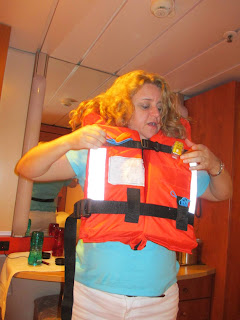 After going to the muster drill we went back to the room to see if our luggage was in our cabin and Karen had to try out the life jacket to see if she could remember what to do...she did quite well. Especially since we were both feeling pretty good by this time. She blew the whistle and asked if she did it well and I told her she did but it wasn't very loud and she said "this isn't gonna save my azz". One of my bags didn't make it to the cabin. Instead I got a nice little letter saying I had to go down below and check in because I had a lock on my suitcase. Well no chit I had a lock, I had a big bottle of Sweet Tea Vodka in that suitcase! The man asked if I packed and I said "I had my stuff laid out and my daughter packed for me *okie hopes her daughter doesn't read this post since her daughter didn't pack any suitcase*. It's been packed up for days because I stayed with my friend (pointing to Karen) for a few days before the cruise". He of course found the bottle and tagged it and said I could get it at the end of the cruise. I turned to Karen and said "well I guess I didn't forget your housewarming gift after all! It was just in the wrong suitcase". 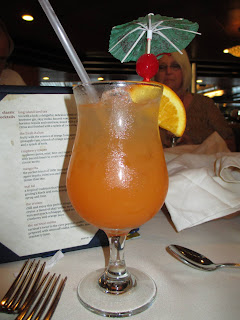 We went back to the room and got ready for dinner. We ate in the dining room the first night and since we had "any time dining" we decided to go early. We were seated with a mother and daughter from Alabama or somewhere, they weren't very talkative and then a few minutes later an older couple was seated at our table, their names were Tony and Judith, but call her Judy please. They were a great couple. They use to live in New Jersey, and I was totally amazed that they lived in the country...I thought there was only industrial cities in New Jersey, but are retired to Florida now. We had a wonderful conversation with them and they told us all about how they had a big plow to get rid of the snow in their driveway and how they don't miss that plow one bit. I can't remember what this drink was, but it was the drink special of the day and it was very good!

After dinner we walked around the ship and checked things out...which is short for I can't really remember what we did. I know we decided to turn in a bit early because we had an early morning departure from the ship to enjoy our stop in Freeport Bahamas. We did met two great gals from Salt Lake City Utah, Kacie and Ashley, who become great friends to hang out with during the cruise...you will read and see more about them in later posts!
Posted by okieladybug or okie_ladybug