Our stop in Key West was by far our favorite. I am sure there are many stories to tell from this day and many that Karen and I will talk about for years, and some of those that we will never tell another soul! HA HA HA...but seriously, not tellin ya'll everything from this day!

We got into port at 12 pm and our excursion of the pub crawl was suppose to start at 12:30. We had to go through immigration here since we had been out of the US ports and this was our first stop back on US soil, this delayed everyone disembarking the ship but luckily since we had an excursion we were priority cruisers and got to go before the masses. After we got off the ship I pulled out our tickets and the excursion had been delayed to 1:30 so we had plenty of time anyway. 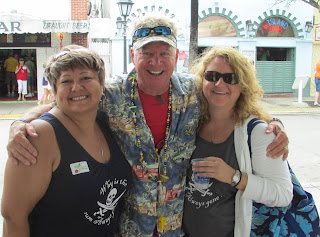 I have to say that our tour guide Robert with The Key West Pub Crawl was awesome! He was very upbeat and must have the patience of a saint to put up with the drinkers during the tour. We had a lot of spring breakers in our group and they did get a bit rowdy at times but were great kids over all.  We got to see the studio where Jimmy Buffet did his recordings and the house where Key Lime Pie started. There were great little shops along Duval Street and we had time to browse during our stops as well, although I don't think many did much browsing. 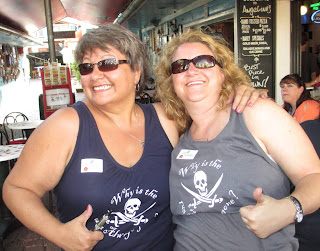 Karen and I wore our shirts proudly! Here we are modeling our tanks. It took us 4,382 stores before we found tank tops! I knew I should have just gotten the ones at my Walmart at home but just knew Florida would have tons of tank tops. Well they did but most were the spaghetti string ones or they were the ribbed ones. Never again will I think "oh I will just pick one up when I get there"...nope, nope, nope! From now on the project will be done before I leave home. I also learned that you really do need a good solid surface to do the heat transfer vinyl. I did these on Karen's ironing board and some of her lettering came off. Or maybe I should just get a heat press! HA HA HA But seriously, I would love to have one! 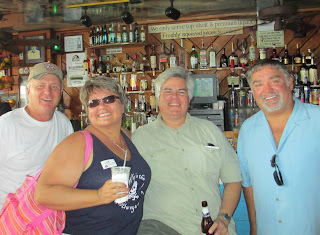 Ya know how you hear "It's a small world" well see the three guys in this picture...IT IS PROOF! I started talking to them, well simply because I will talk to a dang tree stump if it sits next to me for more than 10 seconds, and found out they were all from Oklahoma. But not only were they from Oklahoma but they graduated from a school called Butner which was only about 10 miles from where I graduated! For the life of me I can't remember their names. I can however remember the name of the delectable drink I have in my hand...Key Lime Colada!! OH EM GEE It was like heaven in a frosty slushy drink! They did tell me it was worth spending a full vacation in Key West instead just of one day in port. 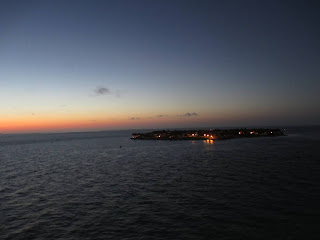 One of the things people say not to miss about Key West is the sunset and as the sun went down I found out why. This was a little island off the island that had some very large expensive homes on it and it was absolutely breath taking. I know my picture doesn't do it justice for sure!

After getting back to the cabin, showering and getting dressed we decided it was time to get a bite to eat and find some entertainment for the evening. We checked the schedule and decided on going to the comedy shows again and to the Hasbro Game Show before the comedy club opened. 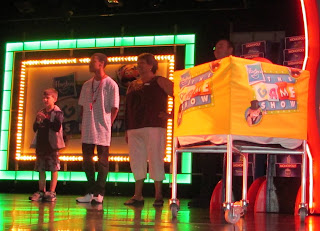 Karen and I ended up sitting up front because the place was crowded and this somehow lead to me being part of the game show! The cruise director was asking questions and if you knew the answer you had to stand up and get his attention and answer the question correctly. He asked where Starbucks started and I knew the answer so I stood up and jumped up and down. Since I got it right I was told to go up on the stage. There were four people to each team, one was the red team and one was the blue team. I was on the red team and I had two kids and a man on my team. 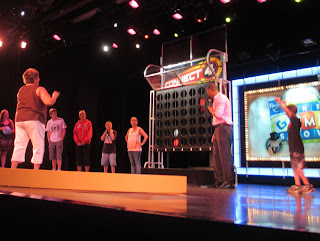 We were told our challenge was to play Connect Four, but it was a HUGE game! We were actually tossing volleyballs in the large game piece to win. I was rather nervous since I haven't played basketball in years and wasn't sure I could even hit the ball in the top of the panel. HOWEVER, if you will look at the picture and see the red ball on the far right of the game panel moving down...YES! Yours truly made the shot and got it in! Our team won that lead us to getting a large card and having a seat off the stage. We later went up and put our game pieces in to see what our points were, mine was something like 9,200 but the winner had like 21,000 so I didn't win all the fabulous prizes but I did get a $20 gift card to HasbroToys.com and a  Monopoly card game. I asked if I got a free drink as consolation prize and the cruise director said "A free drink? This is a family show...go sit down". He didn't like anyone getting  more laughs than he did HA HA.

The rest of the evening was spent at the comedy show and visiting with other cruisers.
Posted by okieladybug or okie_ladybug