Due to the size of the group the classes were broken into Group A and Group B so there would be room for everyone to work. Group A, the group I was in had class at 9:30 am and 3:00 pm. That left us plenty of time to do other things in between classes, which we decided to walk around the ship a little and also enjoy the sun up on one of the decks. 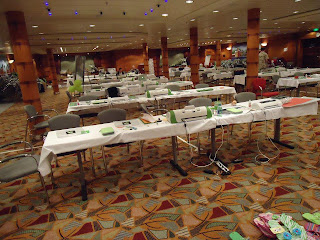 Here is a picture of our room we worked in while on the cruise. I think it was by this time, or likely a few days before that some ladies found I was not their cup of tea. Not that I want to be everyone's cup of tea because that would make life boring wouldn't it? But there are some folks that don't condone to drinking, and I guess don't like people drinking in classes. I however feel it's my vacation and if that is what I want to do then I shall do it...and I did *okie smiles triumphantly*. Not that I stayed drunk the whole time, but when there is a different drink of the day each day I thought it rude not to try at least one or two of them during the day so I could give the bartenders my review on their concoctions.

To be honest I had not been excited about the projects and classes until this point, although I was still having a blast with my friends and the new friends I made so far! I did realize that most of it was not ProvoCraft's fault but rather issues with the server and some of us not being able to use the CricutCraft Room software, which was essential for doing the projects. But like I mentioned before, Dan was awesome and was able to get everyone up and running before we were buckling down to do the next few projects.  Our first project was a layout and when I saw the finished product they had as an example I thought "YES! THIS IS WHY WE PAID FOR THE CLASSES!" 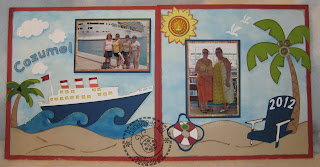 As I said earlier I finished mine at home. I knew there were things I wanted to add to the layout to make it my own, and as most of my readers know...I am heavily addicted to embellishing with ink, glitter, pop dots, etc. This is the finished project. I would love to tell you the supply list but it varied greatly and I honestly just don't remember! 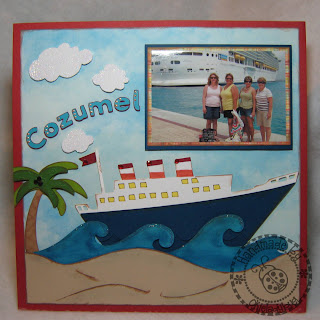 I did add the Cozumel title since I chose pictures from that stop to use on the layout.

The background paper on the kit was plain light blue and I just couldn't deal with the starkness of it so I used "SKY" paper I had in my stash at home for the background and it made the world of difference to me. 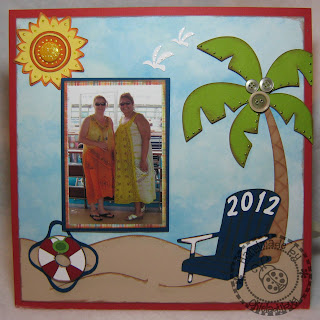 I did some variations on the second page as well and will explain those in the next few photos. 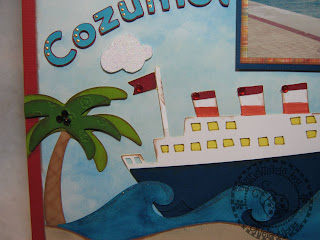 I added the glitter to the clouds by running them through my Xyron and then sprinkling with Doodlebug glitter. Perfect Pearls and Stickles were put on the waves, they shimmer quite nicely now. I colored the orange on the smoke stacks on the ships as my orange pieces didn't make it home and I was too lazy to go back in and cut them when I could just use some markers and color them much more quickly. 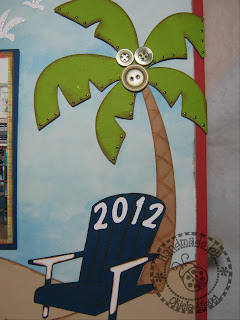 I dotted some Liquid Pearl dots to the palm tree, birds and the sun. I inked the trunk of the palm tree diagonally.

The arms of the chair were orange and since I managed to lose them as well I cut them in white.I also inked in between the slats of the chair for depth. I know, I know, sometimes I have the tendency to over do it and simpler is better...but hey, this is MY project so I will ink if I want to! *okie cracks up laughing*. 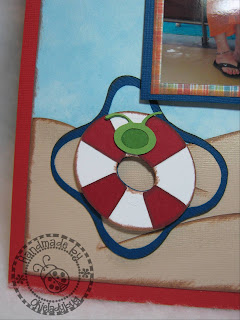 That little cute Cricut head is very tiny and believe it or not, I did make it home with it! However, another cruiser didn't make it home with it and I mailed mine to her since I own the cartridge it was cut from and was able to easily cut another. I think it is adorable on the life preserver and definitely ties in the Cricut Cruise theme in the layout without being over powering! 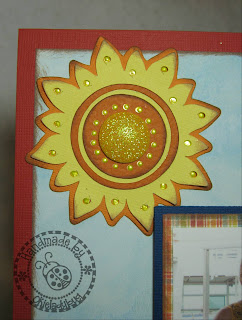 I didn't have all the pieces for the sun when I got home and I did have to cut that again, it's actually smaller than the original and I am not sure if it is cut right but it works for me. There was a bottle cap the glitter center was suppose to go in, yet another item I managed to lose.


While I didn't finish my project until I got home there were plenty that did and I don't think there was one bad review about the Layout Project!

Tomorrow will be about the second project on day 6, the Autograph Book and learning to use the Cuttlebug Quilling kits!
Posted by okieladybug or okie_ladybug