That dang ol' Linda is always getting me in trouble one way or another. I know she often tries to tell folks that it's the other way around but let me tell you....IT'S NOT!

Yesterday was Leap Day, that wonderful extra day of the year where we just don't know quite how to celebrate but since it only happens once every four years we feel like we need to do something to mark the day. Linda and I were on the phone the other day and she tells me that old traditions included that Leap Day was the one day that a woman could propose to a man. If the man refused then he was fined. Well I looked up the tradition and sure enough there was a fine! The fine ranged from a kiss to a silk dress to leather gloves, and I think a few other things. Well *okie sighs a little* being desperate for clothes for the cruise I thought maybe I could score a new dress for formal night. Although I don't think I particularly look good in silk, I do like free! 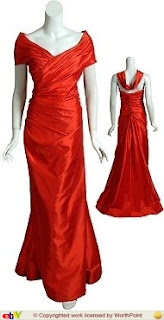 Yesterday morning I thought about this tradition and really got to thinking about that new dress I could score by a man turning me down, even going as far as finding one I liked! I quickly grabbed my cell phone and called my friend, he didn't answer but I left him a message..."Hey, Happy Leap Day! Will you marry me? I will need the answer before midnight". I waited patiently *okie is never patient about anything but thinks it sound better than waiting anxiously* to hear from him and during this time thinking of places I might be able to go shopping and find a red silk dress, red because it's my favorite color and silk because we all know I am a true traditionalist *okie wonders if she should get a lightening rod*. The day dragged on into the afternoon and I never got a phone call. I knew it was time for him to go to work and I still hadn't heard from him so I just knew I wouldn't get an answer and I would take that as a refusal and get my silk dress and be looking smashing for formal night on the cruise!

Lo and behold, I did end up talking to him during the evening. He didn't mention a thing about my voicemail and I thought "I got him now! He has to buy me a dress!". I casually said "oh by the way, did you get my voicemail from earlier today?". He looked at me and smiled and said "yes I did". I told him "well I need an answer! If you refuse then you have to buy me a new red silk dress!". He laughed and said "oh I got an answer for you" and then he walked off. Well that was completely cheating as far as I was concerned. By giving the notion that he had an answer was not fulfilling the obligation of giving an answer! Later when I spoke to him I said "I need an answer, a simple yes, no or maybe will suffice". He looked down at me and smiled and simply said "YES". I looked up at him and told him "you just don't want to buy me a new red silk dress!". I mean what the hell! I need a new dress and he is jacking with me by saying yes when he knows he has no intention of marrying me but just doesn't want to buy me a red silk dress!


Now why do I blame Linda? Because it seems like the thing to do and I need someone to blame for my dilemma...I won't have a new silk dress for formal night for the cruise and I am stuck with a fiancee who has no intentions of really marrying me. I tell ya, that dang ol Linda is always getting me in trouble!
Posted by okieladybug or okie_ladybug