Got My First Blitsy Order!!

I joined the Blitsy bandwagon when it first started and I hadn't ordered anything until last week. I saw they had Liquid Pearls on sale and I thought I would make a little order and see how they were. OMG THEY ARE SUPER FAST!

I ordered cantaloupe, Petal Pink, Buttercup, White Opal, Ruby Red and Bisque. I now wish I had ordered one of the blue colors they had available, maybe they will have them again at a later date and I can get a blue color then. I love using Liquid Pearls even though you have to wait for them to dry. I often use them to add dots to lettering for a little extra sumfin sumfin. 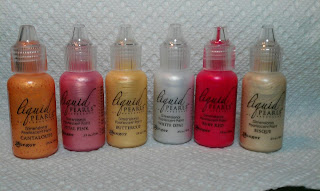 I am not sure if the weather is getting to me or if I am just really lazy. I can't be lazy though since things are getting done around my house. I guess I just am too lazy to write blog posts lately!

My friend Lisa and I went to the Baseball dinner and Silent Auction on Saturday. We bid on a few things but didn't win anything. I did see that the double walled tumbler I had made was up to $14 when we left. Sadly the layout was only at $7, but we left before it was all over, actually before the live auction started. I was afraid if I stayed I would want to bid on things that I probably don't need.

Sunday was spent finishing up a project that will be featured on the Consumer Crafts blog, Crafts Unleashed. I kept trying to think of what to make that would be worthy of such an honor and I couldn't think of anything spectacular so I hope what I submitted will suffice to their requirements and expectations. I tell ya, I just don't seem to do well with crafting under pressure!

I also got out and mowed the yard yesterday. I think that was a HUGE mistake! There were about 5 other people in the neighborhood mowing and since we only have weeds growing right now it was not a good day for anyone with allergies, or even not having allergies, to be outside! My daughter had said she would mow for be but if I had let her do it she would be laid up right now with terrible allergy problems. I was able to take a Claratin and it finally cleared me up so I was able to finally get to sleep around 1am or so. I was glad I felt better this morning!!

Well I am off to the grocery store because I am out of frozen fruit and I want a smoothie! Just wish I would have stopped earlier today on my way home instead of going out at 7:30 at night! UGH...I hate going shopping for groceries!
Posted by okieladybug or okie_ladybug