I love scrapping pictures of snow. I guess it is because we don't get as much snow as other states so it really is nice to see when it comes *okie thinks it is nice to see it go as well*. I really went out on the bling on this one but I think it gave the layout a nice "crystal snow" look. 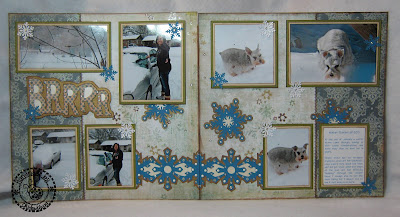 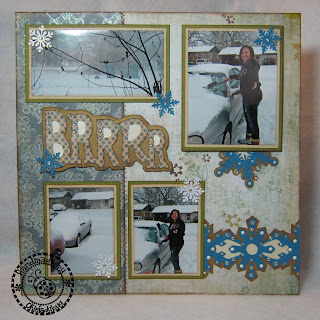 I forgot to take a picture of the second page of the layout so you only get to see the first page close up. The title "Brrr" was done with Winter Woodland cartridge. The snowflake under the top picture is from Cheerful Seasons and was put together and then cut in half. The bordering snowflakes were done with the Seasonal Cake Art cartridge.


I used the Janome Sew Mini to sew a line for the blue paper on to the lighter background paper. I think this paper is really totally awesome for a snow layout!! 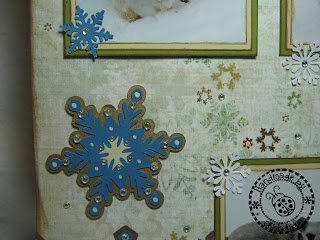 This shows the snowflake a little better. it was pretty easy to cut. I was worried about the intricacy but it didn't seem to be a problem. 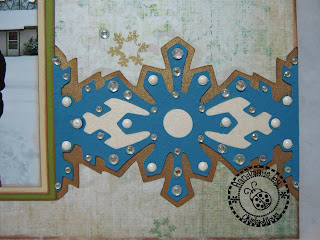 I am not sure how happy I am with the snow border and I think it is because of the size of it. It doesn't really look like snowflakes to me and I am not sure what it looks like. But since it is on the layout all glued, nailed, polished and taped down it won't be going anywhere *okie thinks she might have went a little overboard on that description*. 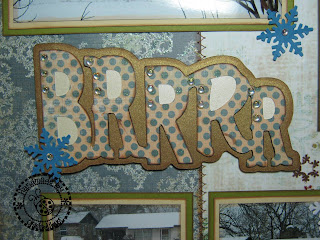 On the close up of the title you can see where I added some of the hot fix rhinestomes to the letters. It really made a difference on making it stand out a little more. I think adding the blue snowflake on the B also made the title look a little better and not so stark.