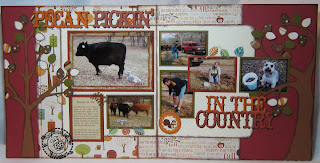 was always a chore I dreaded when I was a kid but now as an adult I enjoy the task. Usually I go with my Aunt Betty and we go up on the ranch where my cousins husband is the foreman. Some years there are plenty and some years it is slim pickins, this year was a bit slim but at least I got some. I took my camera and was able to get a few good pictures for a layout.


The patterned paper of the trees and words is from Imaginisce Apple Cider collection. The yellow polka dot is something I had that went with it. as are the round chipboard embellishment and clear leaf stickers . *okie hears the gasps at they notice okie has stickers on her layout* OH SHUSH! I don't mind some stickers! I used Country Life for the title and Serenade for the trees.

I got my layout designed in Design Studio. I used Country Life for the title 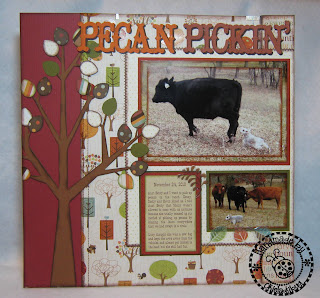 and Serenade for the trees. To cut the trees I put part of the trees off the mat to save paper and since I wasn't using the full tree it just seemed to make more sense to do it that way. I just scissors to clip the areas that needed it.

OH I want ya'll to click the picture and make it bigger and see the picture at the top. Lucy was having a ball trying to keep the cows away from the vehicles and us but she almost got kicked in the head. I couldn't believe I was able to get that shot! Another note about that picture...I had printed it at 5x7 but the photo paper I used messed up in the middle so I couldn't use it. I didn't want to waste ink and paper and do it again so I printed at 4x6 and then just layered on top of the 5x7. I think it gave the picture an interesting effect. 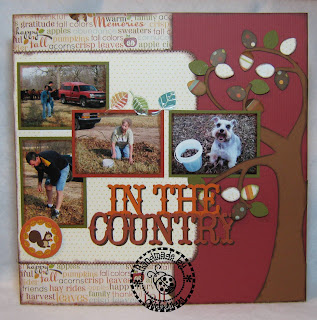 the patterned paper. Okay I admit I also did it because I am a compulsive doodler *okie hates it when her readers make her admit to her vices*. But ya got to admit, it usually looks better when ya do doodle a little diddle *okie suddenly wonders if she has been drinking...but doesn't think she has*.
I didn't want to completely cover the tree so I nestled the picture of Lucy into the branches of the tree and then with the bottom part of the title I put some behind and then left a little to fall on top. I always think layering over like this adds interest to the subjects and makes the photos and elements seem to be more harmonious *okie now thinks she sounds like she is full of crap and wonders if maybe she sniffed way too much ink today*.
I spelled out the PECAN PICKIN' and then welded the letters 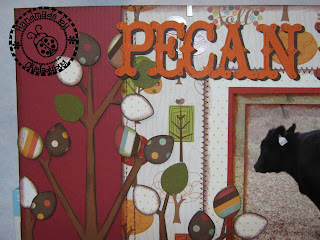 together. Ya'll know how I am about my shadows and layers and since the font doesn't have a shadow I just cut one in orange and then one in brown and offset the orange. I know I have told you guys before that is how I make my own shadow but figure it is worth repeating.

I wanted different colored leaves so I cut three sets for each tree out of patterned paper. And since it was from the same collection the patterns went well with the paper I was using. 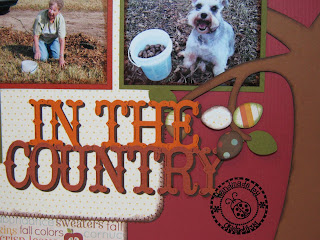 it seemed to go nicely with this layout so thought I would go ahead and use it. You can also see where I did add some sewing on the layout. I thought about sewing some lines down the middle of the leaves but changed my mind real quick because that just seemed like way too much work!