I really am enjoying the Forever Young cartridge. I think I am going to get a lot of use out of it since I have a daughter. I also want to try some of the purse cuts since there are like 50 of them suckers on there, but I haven't gotten around to that yet. 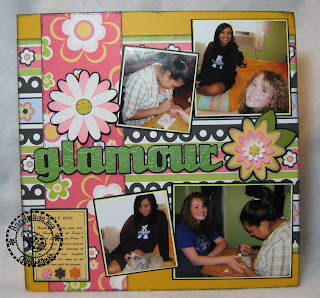 Prom. Of course being a shutterbug I couldn't resist taking pictures of them in the process. I think I irritated her since she wouldn't look up but luckily her friends like to have their pictures taken! The patterned paper is 3 Bugs and is some I got probably 2 years ago when a LSS was closing down. My daughter has always liked the paper but this is the first time I have used it in a layout.

I was afraid of the pictures getting lost with all the bold patterns on the paper so I double matted with white and then black. I think it gave the pictures the right frame to make them stand out more. I try not to always matte photos but I find myself matting more than not. 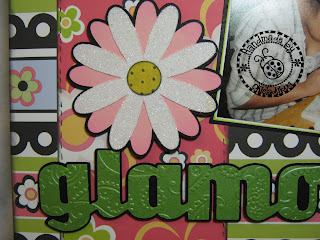 Cuttlebug folder. I did the embossing because it looked too plain and after I did it I thought it didn't need any doodling *okie isn't going to tell them that she started to doodle but then decided she would be doodling all day, suddenly the polly wolly doodle all the day pops into okie's head*. I love the Mica embossed and since it is a a good thickness it always looks great embossed.

I used the Swiss Dots folder to emboss the center of the pink and white daisy. I ran the white cardstock through my Xyron and then sprinkled with white Doodlebug glitter. 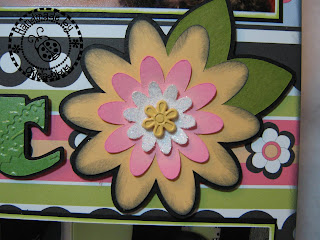 the centers on the top two layers so I could turn the petals up. You guys should know by know I am all about DIMENSION DIMENSION DIMENSION! Speaking of dimension I went to see my first 3D movie last night, The Green Hornet, and it was aawweessoommee! Anyway back to the flower, the center brad is a Stampin Up! brad from the Earth Elements collection. I got 3 of these sets during the big clearance sale a while back. I also glittered the white layer in the same fashion as I did on the pink and white daisy. 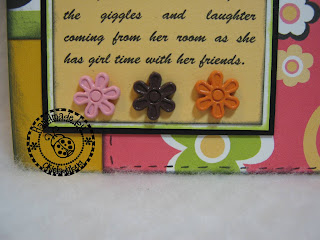 the cardstock I printed on so I could add 3 flower brads there. Even though there isn't any brown in the layout the middle brad still seemed to cooredinate well with all the other colors.

I thought I would use these brads on cards but then I found myself not wanting to "waste" them on something that might get thrown away.

Don't forget you still have time to enter my ProMarker giveaway and also the giveaways on GOING BUGGY with Enfys.

Tomorrow I am going to have something Incredible for ya to check out! *okie cracks up at her witty and nerdy self and knows folks on her Facebook understand*
Posted by okieladybug or okie_ladybug