Living in rural Oklahoma football is a big thing in my town. I mean BIG. If you guys have ever seen the movie Friday Night Lights you will understand.

Actually odd thing about that movie. When I was working on my Masters Degree there was a guy in classes with me telling us about a book coming out that was about his high school football team. Of course we just laughed at him. I had forgotten about it until I went to see the movie Friday Night Lights and I could have been knocked over with a feather when they said "Don Billingsley". I called a girlfriend of mine who was friends with Don after the movie and told her "OMG! Don wasn't lying to us!". Now with that said I would like to interject I believe there was some added dramatization as there are in most movies.

Anyway back to the layout. My daughter and youngest God Daughter 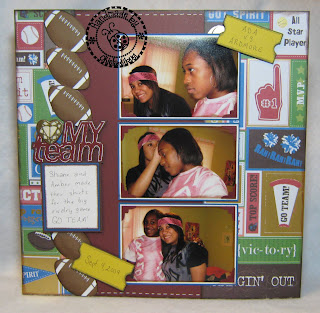 Amber were getting ready for the big rival game and I was able to snap a few pictures of their little ceremonial activities.

I had a few football layouts I was wanting to do and also I have some softball ones I need to do of my daughter and I knew Sports Mania would be the cart I would want to use. It was another eBay score, touchdown, and whatever else pun might be appropriate at this time.

The patterned paper is from the DCWV Highschool stack.


On the title cut, using Design Studio *okie thinks it is awfully redundant 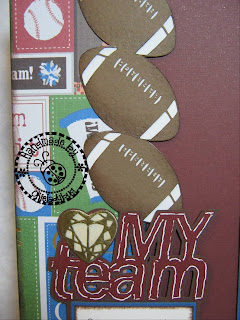 saying this since everyone knows okie can't use the Cricut without Design Studio* I welded a rectangle to the "heart" My team so I could put my journaling there. I think it worked out nicely. I used a cut from Hannah Montana to do the facet heart and adjusted it to fit the one from Sports Mania. I was too cheap to a little square out of a full sheet of gold cardstock so I just cut it from white and then used gold embossing powder to make it match the patterned cardstock. 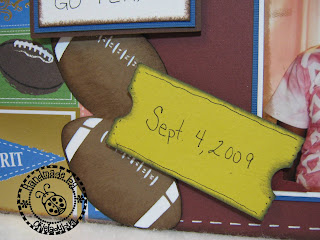 is from a Mickey cartridge. I have to tell you that I did have this designed in DS and then transferred to my Gypsy thinking I would save time by not switching out carts. Well I couldn't get the design to cut right so i ended up just making the border larger so I didn't need to overlap and weld. That Gypsy is going to be the death of me yet!

I think it still turned out okay. I did have to use a white gel pen to do some of the stitching on the football border though because since it was small the stitches didn't cut well. I also used the hide contour feature to make a white border cut to layer under the brown. I used dark brown ink to shade the border and it seems to give it a nice realistic look.
Posted by okieladybug or okie_ladybug