So LGuild is new to the world of cricut but man on man is she already showin off! I had the pleasure of meeting her at the Scrapbook Convention that was here in my town. She had a lot of questions about the Cricut was was just intrigued by Design Studio! Well of course ya'll know me *for those of you who don't, I am a big time Yakkity Yakker*! I had to show her a few things that was possible with the Cricut.

LGuild told me she is a card maker and I told her the Cricut was great for card making also! I also told her about the message board. She promptly found the message board and my blog! She makes cards for KEIKICARDS, which is a charity that sends out about 400 cards a week to terminally ill children. I don't think she is one to toot her own horn so I am going to TOOT IT FOR HER!! She has made about 200 cards for them and they are going to put one of her cards in their gallery on their website this month! YOU GO GIRL!! 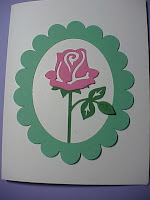 to share!! Since she doesn't have a blog YET...*giving a bit of an evil giggle as I love to enable* I offered to post her design on my blog. As you can see she did an AWESOME AWESOME JOB!! There are several ovals on the cut file so you have a choice! KUDOS to LGUILD for sharing her great design with us! I did tag the file with her message board name so if you use it and show it off please give credit where credit is due!
Posted by okieladybug or okie_ladybug