First off let me say that I am a lazy blogger! I do good for awhile and then POOF I just get to where I don't want to post my stuff because I'm too lazy to upload the pictures and write a post but this project deserves a post. Okay it really does but also I had so many questions about it on Facebook I thought it would be easier to make a blog post than answer all the questions asked individually! 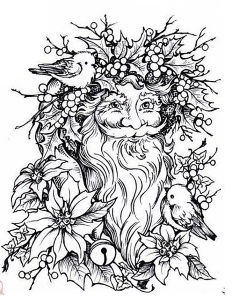 I am a Santa collector and at Christmas my house is mainly decorated with my Santa collection. It makes it easy to decorate the house and also to put them away *okie suddenly wonders if is she is a lazy holiday decorator as well*. Anyway I found this free digital stamp image on  CreatingWithoutCrayons -JackiePNeal when I was doing a search for Santa images and I just knew I had to do something with it!

Since there was so much detail in the image I knew there would be hours of work and it took me 2 days to get the image cleaned up for cutting and the converting to an SVG at that point only took like 3 seconds...if that long!

I used Make The Cut to transform the image from a digital stamp into a workable SVG file for cutting. To do that I had to do the following:

1. Pixel Trace and Clean Up - this required a lot of manipulation with the node mode so I could get rid of a lot of small pieces that give the digital stamp the definition because they were just clutter for a cutting image.

2. Layering - I had to move different individual pieces to new layers and then join them, such as the berries, pieces for the birds, beard, etc so the image could start taking shape and I could add color so I could get a better idea of what I was looking at for the cutting process.

3. Move layers - once I had about 2,491 layers *okie thinks she might exaggerate a bit* I had to make sure I had what layers belong together and then join those so I could get down to my basic layers and I was able to get it down to about 10 layers or so, I'm too lazy to count right now but that sounds about right. 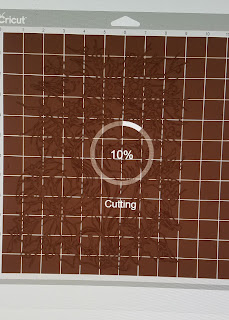 Now once I got the file all ready for cutting I had to find what colors I wanted. I did a solid layer in brown and then the "outline" layer in brown so I would have a base to work with. Cutting the base layer took no time at all but that outline layer...well I went to a family reunion, had 3 naps, ate breakfast, lunch and an early dinner and it was still cutting! Okay so it didn't really take that long but it did take quite awhile, maybe 10-15 minutes. 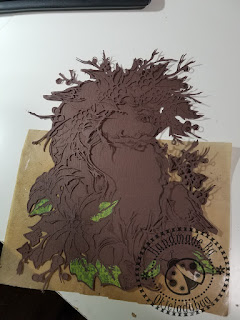 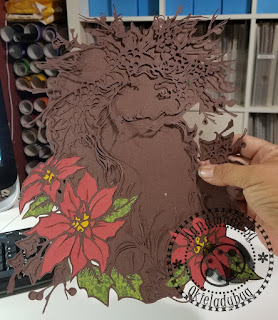 From there I went with  the poinsettia leaves and centers. This allowed me to work from the bottom up on the image and get the outline placed properly. 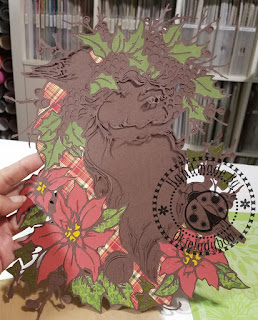 I would cut each layer, that was dedicated to each different color, and leave it on my mat and take off the pieces as I was placing them so I would know where the pieces went. When I got to doing the berries I was definitely glad I was doing it that way because if I had taken the berries off the mat there would have been no way I would have been able to get them all in the right place and the whole project would have went into the trash! 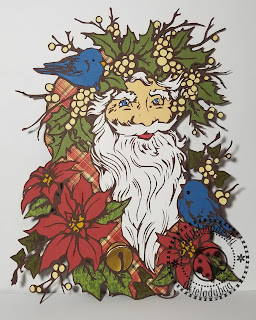 It took me a couple of hours to do the cutting and putting the image together but it was rather enjoyable and I watch the series "Mindhunter" on Netflix while doing the project, excellent series by the way! And before I knew it POOF the whole image was put together! Oh and if you ever decide to do such a project I would highly recommend getting a FineLine glue applicator because that made it a lot easier not to get glue every where during the whole process! 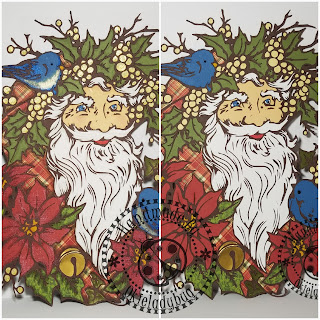 If you know me then you know I can't leave well enough alone and have to do more detail than just cutting of paper. In this picture you can see the difference between the original and after I added more embellishment for better detail. If you click the picture and make it bigger you will be able to see the difference a little better. 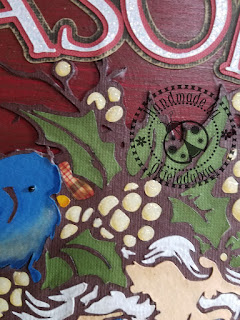 The birds had some Perfect Pearls added in blue and cream and the black of their eyes were done with Nuvo Drops. I used an Promarker on the holly leaves for added depth. The berries were a bit of a process, I used Promarker to shade and then went over with Diamond Stickles and then added Glossy Accents as a final layer. It might not show in the picture but in person it was worth the extra effort.

I did two shadow layers for the Season's Greetings because I'm just extra that way. The bottom layer is Coredinations Expresso and I sanded it for a distressed look and I added Diamond Stickles to the top layer for sparkle...it's Santa, it's Christmas, there has to be as much sparkle as possible! 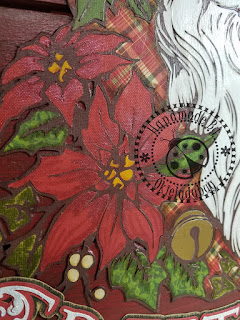 I found the lightest shade of gray I had and used it for adding shading to his beard, mustache and hair. Perfect Pearls were used on the Poinsettia's to add shading and depth. Although it's not in this picture I did use Promarkers for shading on his face as well and I think that is when I realized how much taking the extra time was really going to make a difference and make the whole image POP.

My friend Carmen had found an excellent deal on some wooden pallet things at Walmart months ago and gave me a few and that is what I chose to mount the Santa on. I painted it with some Red Cardinal acrylic paint and then went over with a layer of Milk Paint. Once the paint dried I put on a layer of Furniture Matte Modge Podge, it was used because it was what I had on hand, and then glued down the Santa image and the lettering. 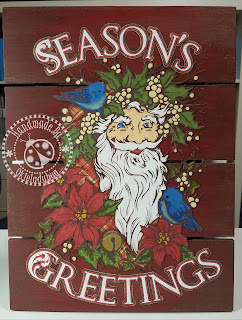 I can honestly say this project took a lot of time and patience but I think it was worth every bit of the effort I put in it. I am very rarely happy with my projects but this is one that I can look at and think "dang I did pretty good!".

I do have some more projects to post because even though I haven't posted I have been crafting!!
Posted by okieladybug or okie_ladybug