Run To Get The Scissors

As a crafter I am obsessed with scissors. Years ago it was scissors for cutting fabric as I did a lot of sewing and when I saw a lot I mean I would make full wardrobes for my daughter so that was an enormous amount of fabric to cut but as time has went on I have evolved to scissors for cutting paper.

For the most part I use my Cutterbee's the most for items because they are just so damn good! I like thinner blades because I can cut closer for when I have covered chipboard or some other item and the fine point makes it nice to clip in close when doing fussy cutting. Being a Graphic 45 lover I do a lot of fussy cutting when making projects and there is no way a regular pair of scissors would work for fussy cutting, at least not in a practical manner. 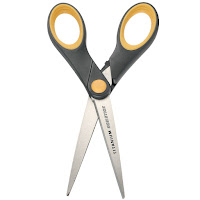 But let me tell you about a new favorite pair of scissors I have acquired. I am in some Facebook group that posts bargain deals and I saw a deal on some scissors that said they were non-stick and for the price I thought I might try them out because I end up gumming up scissors during my crafting sessions and most definitely when I am making my own POP DOTS and then I spend precious crdafting time cleaning off my scissors with UN-DU. The order I made for the Westcott 8-Inch Titanium Non-Stick Straight Scissor, 2 Pack

came in a pack of 3 and why not have 3 pair *okie believes in multiples of everything but children* but the link provided is for 2 pair. I did actually give my friend Linda who I attend stamp club with a pair and she let her friend Carol use them and Carol ordered herself a pair.

I recently had to make up some more Pop-Dots and I was able to make a ton of them and it was nice to not have to stop and clean off my scissors. Oh and ya know the super sticky Red Line tape? Yeah you can cut that chit for days and it will not stick to these scissors...FREAKIN AWESOME POSSUM RIGHT THERE FOLKS!

I'm actually thinking of ordering their smaller pair to see how they compare to the Cutterbee scissors. If I do, I will be sure to let you guys know how they do compare. I highly recommend the Wescott Titanium Non-Stick Scissors so don't walk but run to get the scissors!!