Sorry for the delay in finishing the story....now where did I leave off? *okie goes back to see how her previous post ended*. Oh yes! So BFF Carmen and I had grand crafting plans and they got interrupted on Monday October 12th with some news that would send us scrambling around the rest of the week like chickens with their heads cut off.

Carmen arrived on Sunday and we were all kinds a chillin and hanging out. On Monday when I got home from work my daughter came over and informed us that she and Chuck would be getting married on Saturday, a mere 5 days, and would be doing this little ceremony on my deck...if that was okay with me of course. Now in all fairness I knew she and Chuck were going to get married and they had planned on going to the court house but found out that the court house no longer performs marriage ceremonies and I also knew she wanted to have the ceremony at my house. She had said it would be them, their roommate, me and the officiant. She had informed me of this a week or two before hand but then had changed her mind and said a few more people would be invited. Now when you think of a few more people you think like 5 or 6, right? In this case the few more turned out to be about 25!

Carmen and I got right to work trying to figure out how to decorate the deck and decided that we would try to enclose the deck to make it a little more private. In a few trips we cleaned out Goodwill of all their white sheets and some sheers. We went to another thrift store and found a few more sheers. At Walmart we purchased some rope lights so there would be more light on the deck and picked up some laundry line rope and eye hooks to run the line through so the sheers and sheets could hang from the line. We also got some tulle with the idea of making swags somehow and picked up some burlap *okie wonders what her daughters fascination is with burlap*. Shiane joined us for a trip to the Dollar Tree and flowers, plates, forks, vases and ribbon were found that we felt would work well for decorating and making Shiane a bouquet. I think the best thing about the short time span was there was really no time to stress. Shiane was grateful for everything we were doing and seemed quite proud that Dollar Tree was the source of decorations.

The exact time of the ceremony changed about 3 times before a time was settled on and then it was an hour later that it actually started. I was concerned about where everyone was going to sit but somehow we scrounged up enough seating for everyone *okie thinks it probably helped that about 5 people were standing so they could take pictures*.

So now for the pictures! 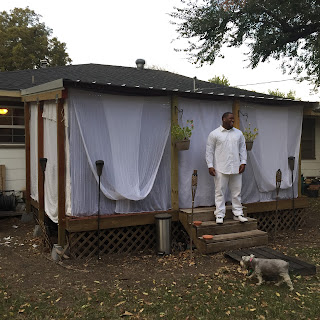 This was taken before the wedding. Chuck and his friends hung out in the back yard while Shiane finished getting ready and waiting for guests to arrive. We weren't too concerned about how the outside of the deck looked since the inside is what was important. 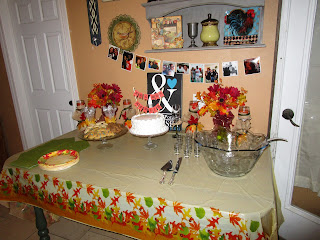 This was the table for the cake and punch. The flowers, vases,leaves, ribbon, plates, candles and shot glasses all came from Dollar Tree. It might be hard to see in the picture but the shot glasses have "Ramsey 2015" on them. Shiane wanted her guests to have a little something to take home with them. It didn't take long at all to get the vinyl cut and put on the glasses. I don't have a better picture of the sign in the back that has the large ampersand on it, it was a gift from her maid of honor. Shiane printed off pictures of her and Chuck and we punched holes in the corners and strung them up for a nice little banner. 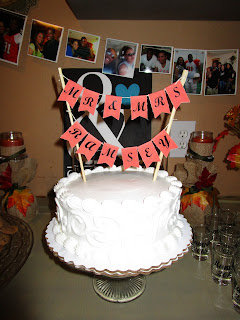 I had ordered the cake before I knew there were so many people coming and it was a little small but it worked great. The cake was 8" diameter and fed everyone, the trick is knowing how to cut it! I cut the banner out of adhesive backed fabric on the Explore and then cut the lettering in vinyl. Carmen and I decided chopsticks would work just fine for stringing the banner and they were perfect.

If you look behind the cake you can see the candles. We turned wine glasses upside down and covered the goblet part with burlap and tied it with ribbon and added a few leaves. 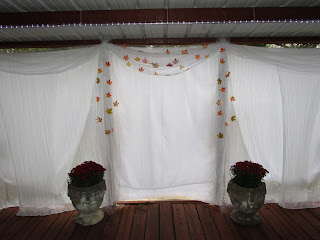 This is a view looking toward the front of the deck. The sheers worked great for allowing some nice light in but still allowing for a great deal of privacy. We picked up some mums at Walmart and put them in the concrete pots I have. I had purchased 20 yards of tulle and we used every bit of it. The leaves in the middle swag are just placed loosely in the tulle and the ones on the draped tulle were pinned to keep them in place. 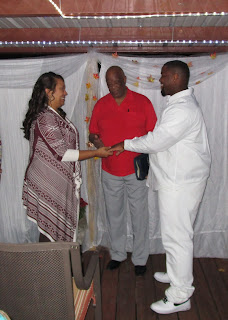 I'm not sure who smiled the most during the ceremony, Shiane or Chuck and they both looked so happy during the whole evening. The empty chair there was mine but I couldn't sit there and take pictures so I ended up standing at the back so I could get pictures. I'm hoping one of the girls got some good pictures as well. I know there were a lot of phone camera's going off during the ceremony and afterwards so there is no telling how many pictures were taken. 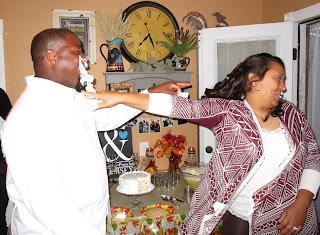 Shiane and Chuck had agreed not to smash cake in each other's faces but then BFF Carmen yelled out she would give them a certain dollar amount if they would smash the cake and so ya know what happened....and you can tell from the picture that Shiane got Chuck a lot better than he got her! I think it took him a good 10 minutes to get the cake off his face. He was laughing about how he couldn't get the icing off his skin. 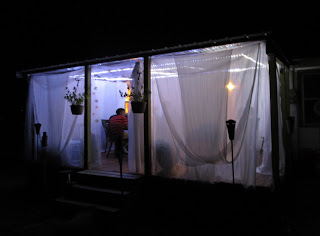 After having cake and punch the adults left and that left the kids friends to have a bit of a celebration. I was so thrilled that they did invite their friends and that so many were able to make it on such short notice and a few more who couldn't make it for the ceremony showed up afterwards. The kids all drank, danced, laughed, smoked cigars, told stories, played cards and just helped Shiane and Chuck celebrate starting their life together as Mr. & Mrs. Ramsey.

While I have suffered some losses over the last few weeks I can sit with a smile on my face right now and see how I am blessed as well. Not only did God know that BFF Carmen would need to be here to keep me from getting into a depressive state, He knew she would need to be here to help me with planning my daughters wedding. I even told Carmen "God seems to know when we will need to be there for each other in person". God has also blessed me with a wonderful son-in-law. While I have considered Chuck my son for quite some time I can now address him as my daughters husband.
Posted by okieladybug or okie_ladybug