I posted about the recipe books a few weeks ago and how I was working on them and determined to get them done for the party. I was able to get all 4 completed and used them as prizes. My friend Carmen knew I had been working on them and when she found out that she was going to be able to make it to the party she said "I don't care if I win anything else, I just want a recipe book!"

I used the Cinch and 1 1/4" wires to bind the books. If you are on the fence about whether to get a Bind It All or a Cinch I would highly recommend the Cinch. It is very simple to use and is pretty much dummy proof *okie wonders if she should share why she says almost and then decides she doesn't want her readers to know she once again messed something up due to watching TV while trying to craft*. Another recommendation I have is Undu...it really is a scrappers best friend *okie laughs at her having to 'undu' pages because of the Cinch mishap*. The pages of the book are 6x6 inches.

Some of the pages have been posted before but I am posting all of them now in sequential order so you can see how it looked completed. You can click on the pictures to see them bigger if you would like to see more details. 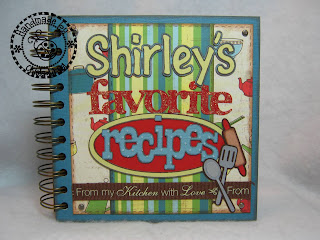 Back when I started the books there wasn't a lot of "cooking" themed paper available, but 3 years later there are some wonderful lines and gorgeous fun papers to use for such projects. There also wasn't any food themed Cricut cuts, so some of the cuts you see are ones I designed myself when I started the books. For the cover I used CM Traveler, Graphically Speaking and From My Kitchen. The patterned paper is TPC Studios - So Delish. 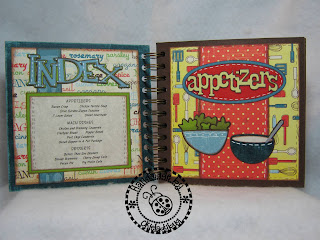 I know I could have added more recipes by forgoing on the index and divider pages but to be honest I wanted to keep the book true to the title, "favorite recipes". Since I don't like to cook I really don't have a lot of favorites. This is the index page where the list of recipes are and also the title page for the appetizer section. The word "index" is from Feeling Groovy. I feel in love with that cart as soon as I saw it. I just love the funkiness of the font. On the opposite page I used From My Kitchen and Block Party. 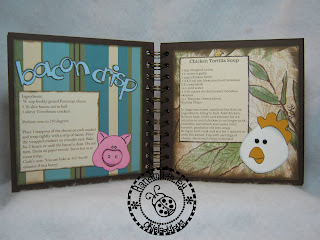 These pages are two of the ones I completed 3 years ago, like I said earlier, back then there wasn't the huge selection of cuts that are available now. I used Cutting Up for the title on Bacon Crisp, the pig's head is from Animal Kingdom and I pop dotted the snot for a little dimension. The chicken head is from Animal Kingdome as well. I used some little black brads for the eyes of the chicken. I wanted some dimension in the book so tried to add where I could but without making it too thick. 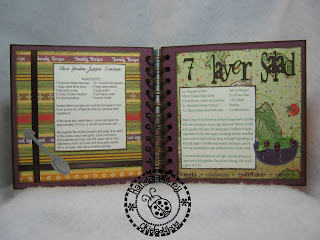 I honestly don't remember what cart the spoon came from, but I believe I added the little handle top myself. These pages were some I did 3 years ago as well. On the 7 layer Salad the title is from Printing Press, one of my favorite fonts! The salad bowl is one I made and I used Mulberry paper for the lettuce and some skittles to look like little tomatoes. I believe they are more red looking in person than they are in the photo. 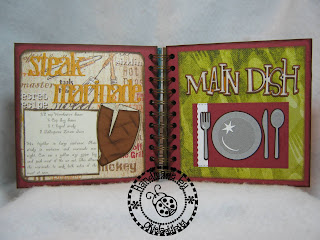 I had finished the Steak Marinade page years ago so the steak is an original design of mine that I made. I wanted to use a steak for obvious reasons and of course back then there were very few food cuts available. For those that don't know, I use to make a lot of original cut files using George and Basic Shapes. On the Main Dish I used Feeling Groovy on the title and the place setting is from From My Kitchen. I just did a hand cut for the placemat. 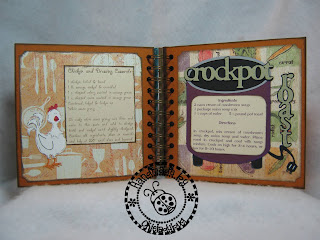 The chicken is from Animal Kingdom. I did some doodling on the chicken because without it the poor little chicken just blended to the background paper too much. The crockpot is an original cut file I made and the title on that page is from Base Camp. Way back when, there was a person who was doing a recipe page for a swap and needed a crockpot so I did share the file and I think I did several different sizes.

I used Cursive 101 for the title on Pepper Steak. Now we have several font cartridges that weld well together that are cursive type but back then this was the cartridge to have since most others were more of a print font. The bell pepper is an original cut file I made. The little pig is from Animal Kingdom and I used the Cricut markers to help outline the little pig so he stood out a little more. 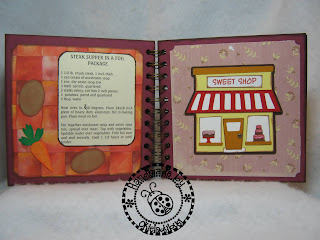 The potatoes are just ovals from George and Basic Shapes. I inked to give them some more detail so they would just look like ovals and then I used stylus to add some little "eyes", which might be hard to see in the photo. The carrot is an original cut file I made. On the Sweet Shop I used Pop Up Neighborhood, which is a Circle Exclusive cartridge. That cart has gotten bad reviews because of the lack of instructions for making the pop up cards but I love it for the variety of cuts, such as this little bakery and doubt I ever use it for making a card. 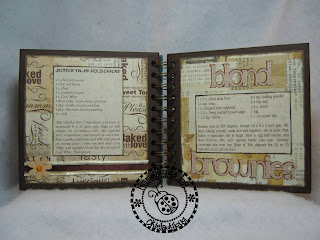 The "Better Than Sex Dessert" recipe was a little lengthy and I didn't have much room for embellishing. I also wondered how I would embellish according to title since that is what I tried to do on most of the recipes. I thought the ribbon and little flower worked fine in this case. The title on the other page is from Alphalicious. I did like the background paper for the dessert recipes, at least back then. I am glad that now days we have a lot more variety of cooking themed papers. 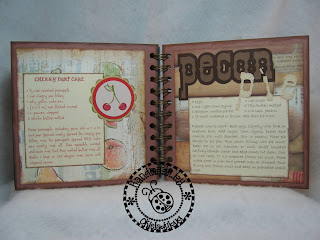 The scallop circle and circles are Stampin Up punches. The little stamp is from Stampin Up as well.  That page went together really quickly, thank goodness because I remember getting tired of making recipe pages and started trying to find the easy way out on some of these. The pecan pie title is from Old West. 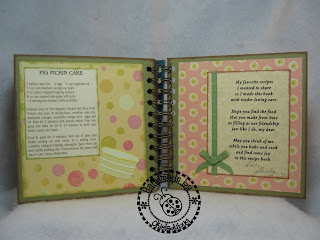 I think the cake on the Pig Pickin Cake is from Sweet Treats but I can't be sure and to tell ya the truth, I am too lazy to go look it up. I wanted to make sure the winners of the recipe books remembered where the book came from and when so I wrote a little poem and signed my name. I also added the year at the bottom.


All 4 of the receipents of the recipe books were thrilled with their prize and while it took a long time to finish these I know it was worth getting the projects done.
Posted by okieladybug or okie_ladybug