I so scraplifted this card from out of one of my Cards magazines! *okie ain't too proud to admit* 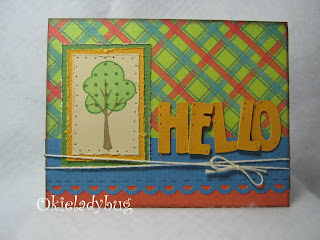 Although the one in the magazine had a bike and I used a tree. The tree stamp is a Inque Boutique stamp that I got about two years ago. I still hate that Inque Boutique is no longer in business, I really did like their stamps!

The HELLO is cut from Opposites Attract and I used the shadow feature to cut it. I did one with the orange cardstock and then cut one from chipboard so it would be a good heavy dimension. I did pop dot the E and the second L.

I used my Heidi Swapp edge distresser on the image and mats.

I really like the twine on this card and think it gives a great look, and yes twine was used in the Cards magazine card also! *some days okie just doesn't have a creative bone in her body* I used a fiskars border punch on the blue cardstock. The patterned paper is from DCWV Indian Summer.
Posted by okieladybug or okie_ladybug