Last night I was on the phone with my friend Scraparazzi and I told her I was going to experiment with the Shrinky Dink oven I found in the guest room closet at Christmas time. I had gotten it for my daughter for Christmas when she was around 8 years old and she did use it for a little while, but like many toys it was stored away after the novelty wore off.

I was posting progress on Facebook as I experimented. Let me tell you, if you don't follow me on Facebook and already know this, I have a bunch of smart azz friends!! *okie cracks up laughin*.
While on the phone with Razzi I was trying to figure out how the dang oven worked. Razzi soon got off the phone with me, she said her husband called. I think she just didn't want to hear the bad train wreck *okie thinks Razzi might be a pretty smart cookie*.

How can anyone break a Shrinky Dink oven? Well I will let you know when I figure out what I did to it!!

For some odd reason I couldn't get the stupid little cooling drawer to come out of the oven. After I found the directions I found out that the timer has to run and then it won't open until after the cooling period *okie thinks instructions are nice sometimes*. So at least I figured that part out.

Here are the replies I received...
ScrapperDelighted - WTH?
Rhonda - didnt know they even still made them
My daughter - Omg! You broke my shrinky dink oven! Mom!!! How could you???!!! Haha. Jk. I forgot we had it. :p
Mollie - Hmmm that's interesting..
ME -Guess I am impatient...just wasn't waiting long enough for it to cool! LOL
Capadia - You - impatient? Never!!! What are you shrinking?
ME - Cap right now I am shrinking anything I can get my hands on and try! ROTFLMAO
Robin - Lucy better run! *little did Robin know Lucy would soon high tail it to the other room*
Camille - A heat gun will work also if you don't get the oven to work.

I picked out a ladybug to color, using my seldom used Prism pencils, and try in the oven. 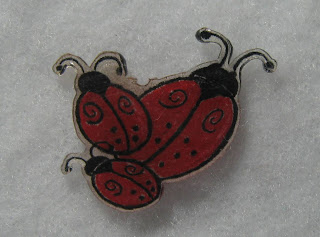 It turned out okay but the little antenna didn't lay flat. Taking Camille's advise I used a slight blast of the heat embossing gun and flattened it out some.
If you look between the two top ladybugs there is a notch. I tried using an eyelet setter punch to punch the hole *okie now knows why they said use a hole punch* and the plastic split. I thought it would melt together during the oven process....it didn't *okie sighs*.

Anyone know if Stazon ink and Bick Markers are Shrinky Dink oven safe?

Renay - is that what blew up the oven?
Jen - Are you talking about sharpies? Yes they are BUT the color gets really dark. I use the pastel sharpies.
ME - Thank you for the answers!

My next question was:

Is it safe to use Cricut Cartrige packaging in a Shrinky Dink oven...or other thin acetate product.

Jen - You have a shrinky dink oven?? You know I'd try it!! LOL!!
Maggie - Okie, I love that you're testing all this out at your house. Later (if you don't do too much damage) you can put out the official shrinky dink handbook! LOL
ME - Okay answer to the question about the packaging from Cricut cartridges........

Do not try this at home. ...
Maggie - Call the Fire Dept, they'll put it out AND they have cute firemen...
Jen - Well I am the same person who caught glitter on fire! Yeah.. never listen to me!! *okie thinks Jen and okie should never craft together as that might be a lethal combination*

Here is the result of the Cricut packaging in the oven..... 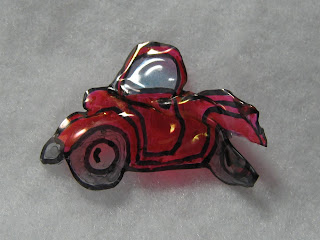 A very bad truck wreck!! It did start to curl and I thought shrink, but instead it just curled. I then tried the heat embossing gun and it made it resemble a Volkswagen beetle that had gone through a car smasher! Oh and about Lucy running to the other room...well she did that when there started to be a bit of an obnoxious odor coming from the oven as the truck started to curl.

In order to keep Razzi updated on the experiment I posted on her wall : Shrinky Dink experiments continue. Do not use Cricut packaging in the oven....it doesn't work. Okay going to find my fire extinguisher. Will keep you posted!

And then I got a post from Razzi, what a dear and caring friend she is, on my Facebook wall. Razzi said "Only Okie would nearly catch her house on fire using a Shrinking Dink Oven that runs on a single light bulb...."

So the end result of my experiement was...I do like the oven and I will use the oven. But I better try and find some REAL Shrinky Dink plastic before I use the darn thing again!
Posted by okieladybug or okie_ladybug