Birthday Wishes! Okay for some folks that might not seem like a good birthday sentiment but being from the great state of Oklahoma....well it hits right on target! LOL

A friend of mine was able to get Old West for me for a great price. I have been checking eBay and couldn't ever find it for a price I wanted to pay so I was glad when she said she could get it for under $30! I have wanted this one since it came out. I knew I had to have this one...I mean I am an okie after all! I did borrow my friend Linda's to do a layout, that just put the nail in the coffin about me getting it!

For the HONKY TONK BIRTHDAY WISHES card I used Stampin Up Chocolate Chip and Creamy Carmel carstock for the solids. 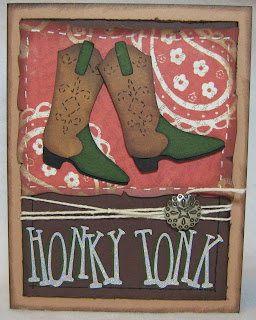 I used a paper piercer to give the look of stitches on the Chocolate Chip and then used a black Stampin Up marker to make the stitching. The red paisley paper is made by Creative Imaginations. I used a white Signo UM 153 pen to do the stitching on the paisley mat and then turned up the edges. It is also a cut from Old West that reminds me of a wanted poster with the distressed and torn edges.

The boots are some paper I picked up a long time ago and I thought it gave the look of leather. I did cut them out in black and then the brown. I trimmed the bottom off the brown so I could have a heel and sole on the boot. The green is Prism cardstock and those cuts are a layer cut. Chestnut Roan was used to ink the brown and dark green for the hunter green parts of the boots.

I cut Honky Tonk twice, once in the green and then once in holographic paper. I think if you click the picture you can see the holographic better.

I used some twine wrapped around the card mat and then just tied it. The concho button had a loop type attachment and I took some pliers and took it off. I used mounting foam to adhere it to the card.

Here you can see more detail on the dimension. I used pop dots on one of the boots and 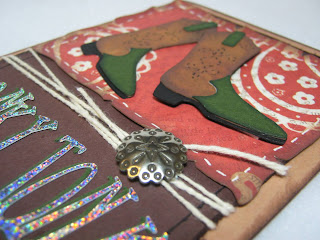 also on the concho button.

I am going to stamp the sentiment on the inside. I think it could be used for a variety of occasions...especially for that favorite cowboy or cowgirl!
Posted by okieladybug or okie_ladybug