Another night at Stamp Club...and some more note cards!

Tonight was Stamp Club and Linda and I had a blast as usual! We had to drop my car off at the shop so it can get a tune up in the morning then ran by Staples, where we left totally empty handed. We decided on Chinese food for dinner and ate way too much but it was way too good! We also made a quick trip to the LSS where we both picked up some Bazzill Swiss Dot and some regular 12x12 cardstock. Then it was off to the public library for Stamp Club!

I was able to get two more designs done while at Stamp club. 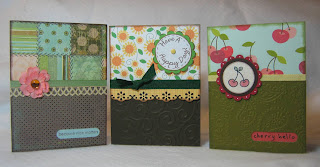 The one on the left I did at home and forgot to post the other night. The sunflower and cherry one are the ones I did at stamp club. The sentiment on the sunflower is computer generated and the cherry stamp and sentiment is a Stampendous set that I absolutely love! Of course I think we have already confirmed that I have a thing for cherries. All 3 cards were done with scraps again. I did use the Stampin Up word window punch on the left and right cards. The border punches are Martha Stewart. Don't forget to click the picture if you want to make it bigger to see more detail.

Somehow during the night I committed to hosting a Stampin Up party! ACCKK! I have never hosted one before so this should be new. Oddly enough everyone there seemed to know there would be NO home cooked food provided *okie wonders how everyone seems to know that she doesn't cook*. So wish me luck at my first time hosting! My party will be February 13th and hopefully I will have a big enough party to get a level 1 hostess gift!
Posted by okieladybug or okie_ladybug