I went to stamp club Thursday night with my friend Linda. While I 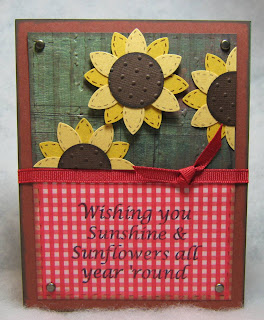 didn't get much accomplished I did actually get more than I usually do accomplished. Carol, the lady who heads up the group, had sent an email that she would be bringing sunflower stamps. I thought about my large daisy punch and how I could use it to make sunflowers. I did get 4 of these cards made.

The sunflowers are made with the EK Success Daisy whale of a punch and the centers are a 1" circle punch. I used the Swiss Dots Cuttlebug folder on the centers also. I am not sure what paper the gingham is but the green is Basic Grey. Both are some scraps that Carol had brought for use.


I used two flowers for each card, but I cut one in half and used it like that. I only pop dotted the full flower. 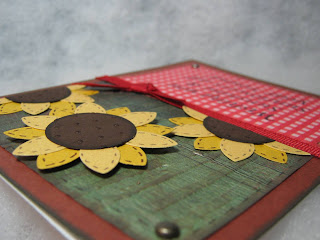 I used the cuttlebug distressed stripes folder on the green paper for more dimension. The stamp was one that Carol brought. I didn't stamp anything on the inside because I thought this could be used for several different occasions and I didn't want to commit to using them for just one.
Posted by okieladybug or okie_ladybug