In 25 days I will be heading to Orlando Florida to spend a glorious week with BFF Karen! It's been almost 2 years since I've been to see her and I can't believe it's been that long since we have seen each other, 6-9 months is usually as long as we go without a visit with each other.

We won't be going on a cruise this year as it isn't in the budget for either of us right now. However I will be spending a week in Karen's pool. She bought a house not long ago and the mission is actually for me to get her craftroom set up. If you are a regular reader you might remember me doing this like 2 years ago in her apartment. When I last talked to her she said "I thought about going in that damn room and doing something but since you are coming I'm not touching any of that shit". The cool thing is that Karen lets me have free reign to arrange and put things away however I want and then she never moves things around because she can call me and ask "hey do you know where that brown paper is" and I answer "yeah it is on the 3rd row down and 2nd cubby over". Seriously...that so happened before!

Karen really can craft and she actually comes up with some really cute ideas. I was thinking about this and remembered when we did Flat Stanley for her nephew and thought I would share that post again since it was something we worked on together and we were both so proud of ourselves.

Without further ado I present -

My BFF Karen is in for a week for my daughter's graduation and brought Flat Stanley with her. Karen's nephew is in first grade and sent Flat Stanley to her before she left California to come here. When Karen told me about the project I told her we could fix up something nice. Karen's idea was to write a letter and put some pictures in a plastic brag book type thing. Of course that just was NOT going to work for me! *okie wonders if maybe Karen had a lapse of temporary insanity with even thinking that would work at okie's house*. Especially after she said her nephew was talking about how a little girl in his class had a really nice project from her grandma!!

We sent the pictures to Walmart for development and of course I had idea's running through my head. Evidently my idea of nice and Karen's idea of nice are most assuredly not the same. I did tone things down a bit, but not by my choosing! *okie is still cringing because none of the pages are inked*.

The little album is 6x6, which does fit in a flat rate 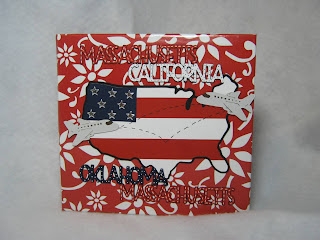 priority envelope in case anyone is wondering! HA HA HA

For the cover I used 50 States, Locker Talk and Everyday Paperdolls. I did manage to get in a little doodling when Karen wasn't looking. I cut the United States in red, white and blue and then cut the white into stripes and cut the corner for the blue. The starts are iron on studs.

I used a black marker to dash the flight pattern across the United States.

I wanted to to cut Massachusetts again but with silver thinking it might show up better.....Karen wouldn't let me!

Karen found a post card for the first page to represent 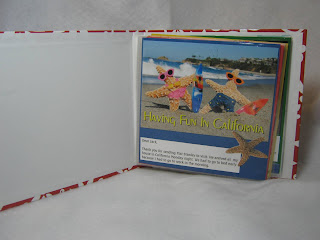 that Stanley made it to California. She wrote the story out and then I placed the pictures in order through the book. After she got it typed up I measured what size was left for journaling and then used MS Word to get the size right.

The starfish at the corner of the journaling is a die cut I got on clearance years ago.

Karen is a travel nurse and was able to 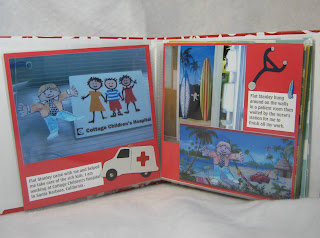 take Stanley to work with her and get a few snapshots. Everyday Paperdolls was used for the Ambulance and the stethoscope. I cut the ambulance in black and white and then cut the tires off the white. I glued a small piece of red behind the cross and then glued the white on top of the black. Brads were used for the hubcaps. The stethoscope was cut in blue and I used a silver gel pen for the end and ear pieces. I added a surfboard brad for some decoration.

So I had problems with these two pages. Karen didn't want to 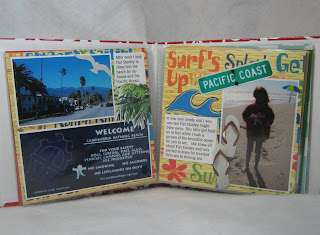 cover up the paper and kept telling me I couldn't use it. I figured it was my paper and I could dam well use it if I wanted too! I thought she was going to have a heart attack when she realized I cut the word flip flop in half *okie grins a bit evilly* and she felt that was like a mortal sin since she loves anything flip flop!


I used die cuts for all the embellishments on these two pages, 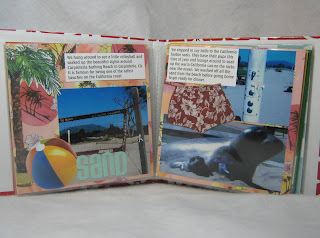 except for the word sand, it is fuzzy sticker letters. I love how Karen had Flat Stanley in all the pictures! I don't know if I would have thought of doing it or taken the time!! *okie does have to admit that Karen is an awesome Auntie* 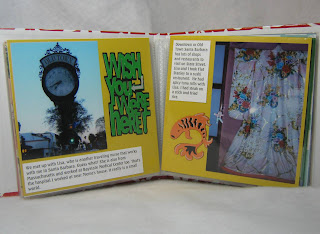 "wish you were here" from Going Places. I did make it longer using Design Studio so it took up more room. I colored in the arrow with silver gel pen.

The fish is cut from Pagoda and I used orange Mica cardstock to give it a more glitzy look and then added a little doodling with a silver gel pen. 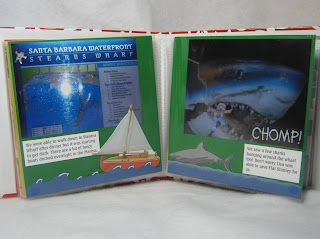 used. I cut the waves from Everyday paper dolls. The shark is a rubon, as is the word "CHOMP!". They came in a package of Sea World rubons and worked great for that page.

Karen even had a friend of hers in California in on the project, that is the hand you see saving Flat Stanley from getting eaten from the shark. *okie certainly hopes the first graders in Massachusetts don't get nightmares from this image* 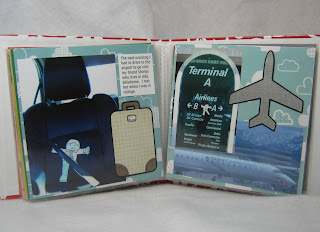 buckled up in the car for the ride to the airport!! I would really like to say that Karen was teaching the kids safety but after being BFF's for 23 years I have to admit she was likely being a smart a**!*okie falls out of chair laughing*. I used Going Places for the suitcase and the airplane embellishments. On the suitcase I used a Stampin Up marker to color the corners, handle and around the name tag. And yes boys and girls, inside that tiny name tag it indeed says "Flat Stanley". Karen thinks I go overboard sometimes *okie blinks innocently*and I have no idea why she thinks that! 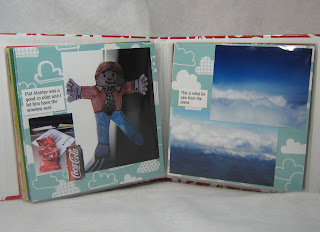 the ones with the clouds were fine as they were. We came up with peanuts but I didn't have any peanut brads *okie knew she should have ordered some* so off to the internet I went searching. I found a picture of some Delta Airline peanuts and a can of Coke. I sized the images to what I needed and printed...WALAH! instant embellishments!

Stanley finally arrived in Oklahoma!! Oh yeah, and Karen made 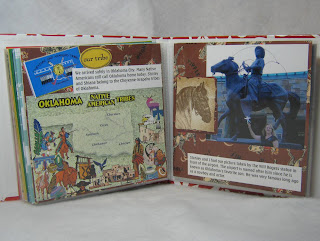 it also *okie snickers*. I found a post card at Walmart that we used for the one page. I also resized a picture of the Cheyenne Arapaho tribal flag to use. For the statue picture I just used a sticker I had left over from a layout I did years ago *okie hears the gasps when she mentions stickers*, OH GET OVER IT! You guys know you have used them before also!*okie cracks up laughin*


I printed a picture of a Sonic cup to add to the page here. 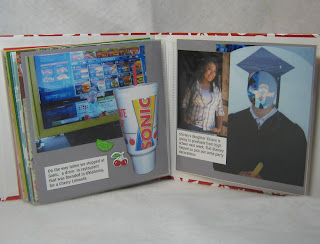 The lime and cherry brads are some I recently ordered from Eyelet Outlet. Karen mentioned something about her nephew should feel special that I used some of my nice brads on him*and okie whole-heartedly agrees*. The other page didn't seem to need much embellishing. We did add a picture of my daughter since her graduation was the whole reason for Karen and Stanley's trip to Oklahoma.


Finally on the back page we added Stanley decked out with 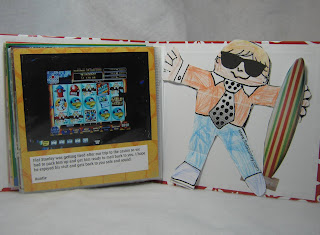 his new sunglasses and surfboard. The sunglasses are a die cut and the surfboard is from a picture Karen had left over.

So that is the little scrapbook of Flat Stanley. It could have been better, but it could have been a lot worse to be sure! Overall I am quite happy with the project....oh and that little girl from Karen's nephews class.......She can tell her grandma to EAT IT BECAUSE WE ROCK!! *okie composes herself*.