Getting a new car isn't a big deal for a lot of people. I know folks who trade in every two years for a different car, which is something I totally don't get because I would think people would look forward to having the payments end but I guess to each their own. However, I do NOT fit in that category!  Even the thought of having to get a new car is something  that can put me in panic mode. Maybe it is the sentimental attachment I have to my cars, maybe it's the idea of not having payments, maybe it's the idea of having to deal with financing and slick talking salesmen...or a combination of all of it. Of course my fear of commitment probably has something to do with me staying attached to a vehicle for a long period of time, I want to make sure it is something I really, really, really want to have before I make a final decision and commit to driving it until the wheels are ready to fall off. I turned 49 in December and during my life of driving I have only owned 4 cars. Yes you read that right...4 cars in 30 years. 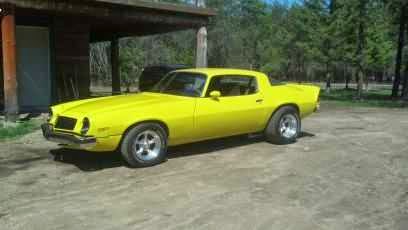 My first car was a '77 Camaro and I got it when I was 18 and about ready to start college. Up to that point I drove the family truck. Oh how I loved that car! I bought it used, obviously, and it had been well taken care of. Luckily my uncle was a mechanic and I learned to do a lot of the repairs myself. I changed the starter, battery cables, distributor cap, fixed the a/c, changed the head gasket cover, change out the oil sending unit, and a few other things with nothing but instructions given over a phone most of the time. A few times, luckily I had a very long phone line and could put the phone out the window and have the hood of the car up, I called my Aunt Betty and she would relay to Uncle Perk what my car was doing and the sounds it was making and he would tell me what I needed to do. I remember one time, before they had moved back to Ohio and now they live back in Oklahoma again, there was something I was doing and he evidently decided it would be too difficult for me to complete and he came down. I was standing outside next to my car *okie thinks that sounds so silly since she would be standing inside next to her car* and had just closed the hood when he pulled up. I'm quite sure I had a puzzled look on my face as I asked him what he was doing at my house and he said "I thought I better come down and do it for you". I told him I already had it done and he took a look and was quite impressed with me. I would probably still be driving that car today had I not had a surprise pregnancy! 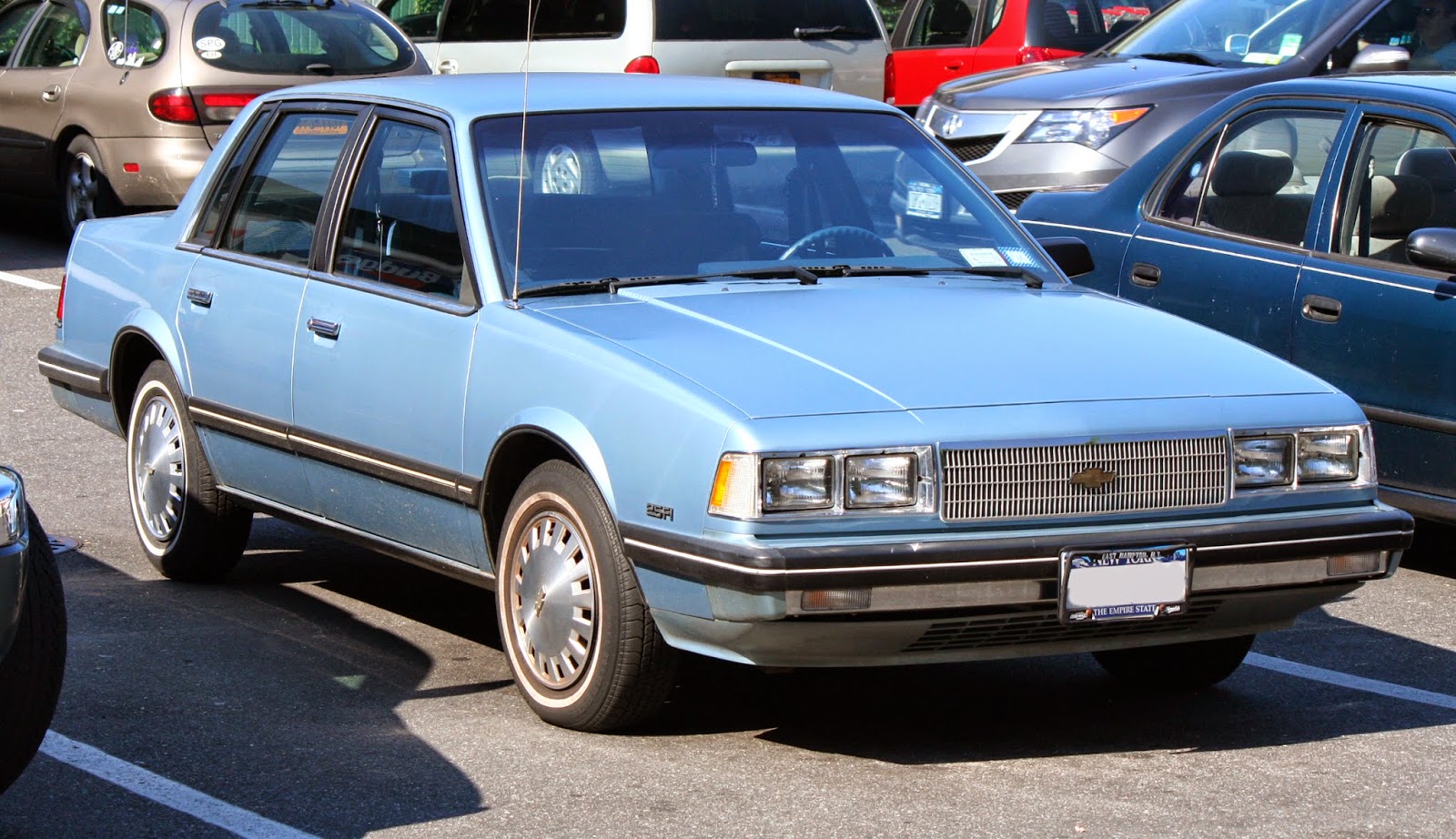 Once I had my daughter I thought it would be more "motherly" to have something more family oriented and I choose to get something 4 door. Right before my daughter turned a year old I got an '87 Celebrity. Now mind you I went from a 305 8 cylinder engine to a 4 cylinder engine and the first time I tried to pull out in traffic I thought we were going to die!! DIE I TELL YOU! I was use to punching the gas pedal and zooming forward at warp speed but this car had me thinking I was going to have to get out and push the dang thing! Other than that I loved having the 4 doors and extra room in the car. Being able to get her in and out of her car seat was a breeze in the Celebrity. I did do some mechanic work on the Celebrity, mainly just changing the alternator, and I think the brake pads once. A friend of mine did a few repairs on it as well. When my daughter was in second grade my Celebrity was pooping out on us. She was quite distraught over the idea of having to get a new car and asked if we could keep it and "put it in the backyard and make a fountain out of it". Not sure where she got that idea but it was rather amusing. I was not looking forward to getting a new car and having a car payment. I had paid cash, that is one of the benefits of not buying new or almost new, for my other two cars but knew I didn't have the cash to get another car. 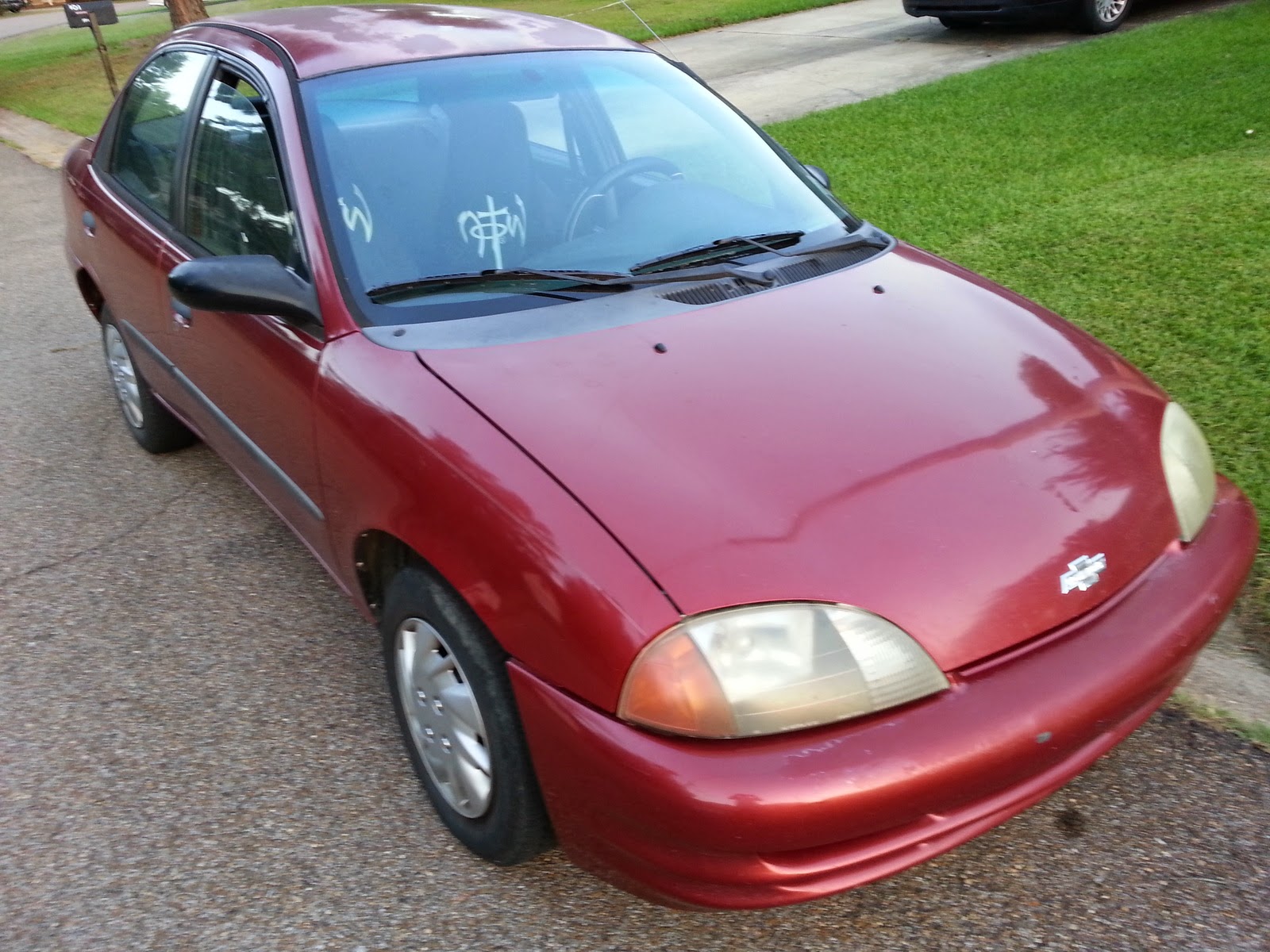 After much searching I ended up with a little '99 Chevy Metro. I am a bit of a Chevy gal and while some people swear by foreign cars I prefer to have American made. One of the reasons I chose that car was because of the gas mileage. At the time I was having to drive quite a bit seeing clients and it was very important to me that I could save money in gas. I did love the little Metro, and my daughter came to love it too. It was rather funny to see her friends packed into the little Metro when I would have to transport them somewhere and I remember a fight almost breaking out, good-natured that is,  when she was in junior high because her friend Cameron got in the front seat because he was too tall to fit in the back for even the shortest of rides. My daughter and I learned how to pack that little thing down for when we would go camping at the lake and even had a certain system of being able to fit the totes and equipment in the trunk and back seat. My Metro started giving out on me and I wasn't sure I wanted to put the money into the car for repairs or get something else. One day when complaining on Facebook about not having AC my aunt said they were wanting to get rid of their Kia Sedona and the AC worked great. 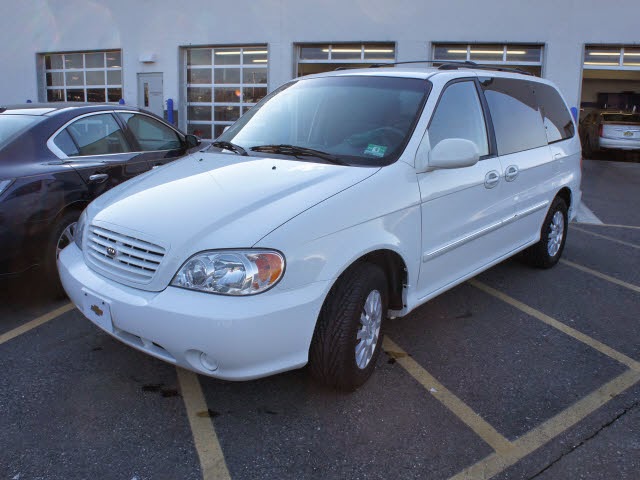 The '02 Kia Sedona was definitely an upgrade from anything I had before. I loved having power locks and windows and being able to sit up high and easily see all around. It was rather amusing that at that point in my life I had no kids at home and it was just me and little Lucy riding in the van most of the time. It sure would have came in handy when Shiane was growing up and taking her friends around but ya know that's how it goes sometimes. The Kia started leaking oil a few months ago and the AC hasn't worked the past two summers but I was able to deal with all that until the first of December. I was on my way from McCalls to the office for a staff meeting when some lady slammed into the back of my van. I truly believe she was texting and driving because of the different statements she made, which I won't bore you with. It took almost two months for her insurance company to "decide we will take liability" for the accident. I had already given them the police report and my statement but she wasn't answering her phone to talk to them and they said they had to talk to her. My next dilemma was should I use the money and go get the van fixed or use the money and get a new car...decisions, decisions.

After much contemplation I decided on getting a new car, new to me that is. I had looked at the Nissan Versa's and Sentra's when my daughter got her car at the Nissan dealership in town and I also liked the guy that sold her car to her. I hate car salesmen, think I mentioned that in the beginning of the post. Johnathan was a nice guy and I felt I could deal with him. When I started my search I found out he was no longer at the Nissan dealership but was instead at the Chevy dealership. I did go to the Nissan dealership and ended up test driving a new Versa, I had told the salesman I didn't want a brand new car and he insisted on me test driving one. I have a friend who has a Versa and he is very happy with it. At this time I had also been search the Chevy models and really liked the specs on the Cruze and I knew the Chevy dealership and several on their lot. I am a very practical person when it comes to many things in life and I am probably overly practical when it comes to cars. A car is something to get me from point A to point B with the least amount of effort, time and money. I am pretty much a no frills car kinda person but I did know I wanted power locks and windows and wanted something where the AC worked and it had to have cruise control! 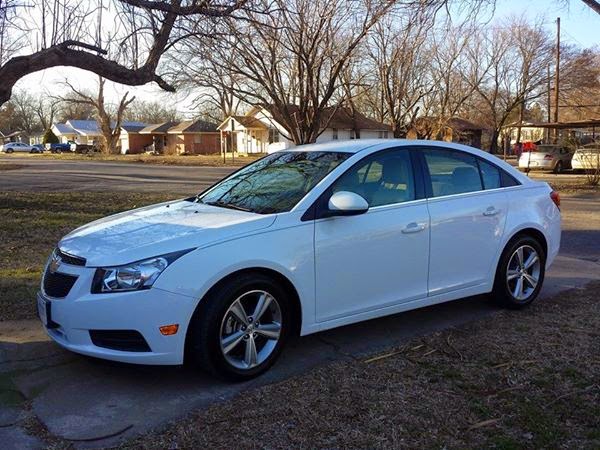 Yesterday I searched out Johnathan at the Chevy dealership and while he got moved to the finance department on Monday he said since I searched him out he would make sure I got a salesman he trusted. Of course I think that was probably a line of bull but at least I knew I could be perfectly honest about things with Johnathan and he wouldn't take offense. One of the things that made me like Johnathan was that he didn't have a fake smile plastered on his face all the time, he didn't look like some kinda cartoon character grinning from ear to ear.  I had already done my research, I had my quote from Nissan ready and all that was left was for me to test drive the Cruze, which I did. The salesman, Justin, looked a little nervous a few times and probably rightly so. Anyway after bouncing things around in the finance office with Johnathan and me telling him Nissan could give me a better deal, debating car payment and down payment, I ended up walking out of there the proud owner of a Certified 2012 Chevy Cruze! My requirements of power windows, AC and cruise control were met and I got much more. It's going to take me hours of reading to figure things out on this car as it does have frills such as bluetooth, heated leather seats, remote start, power other things and so on. I am quite sure I could have my daughter in the car with me and within 30 minutes she would have it all figured out and be explaining to me. There will likely be some features I never use because I just don't know how to use them or I haven't figured out I have them!

I'm keeping my fingers crossed that I don't have to even think about getting another car until I'm 60!
Posted by okieladybug or okie_ladybug