First off, don't forget to VOTE FOR CARMEN today! And thank you to all of those who are voting and voting daily!

Now back to the laundry dilemma! Recently my washer acquired some issues that I didn't want to have to fix myself. While I was at work my daughter called a repairman and he told her it was going to be $40 for the lid switch, $40 for him to just look at the washing machine to see what the problem was with the drum and I would have to pay that whether he could fix it or not and then the bomb....we had to take the washing machine to him and he was backed up by a few days and didn't know when he would be able to get to it. I knew I would probably be looking at at least $150 to $200 to get the washing machine fixed, which is half the price of a brand new decent washing machine. I am not one of those who thinks they have to have a fancy washer, as long as it gets my clothes clean I could careless if it has digital controls, glass doors, etc. 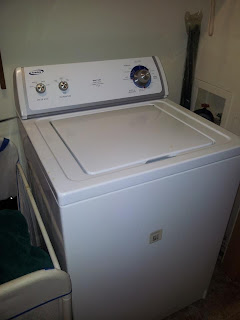 I started looking at the local Facebook garage sale sites hoping to find a decent washer for a decent price. The other day I came across a lady selling a washer and dryer. I quickly asked if she would sell them separately and waited for a reply. An hour after I asked if they would sell the washer and dryer separate some lady posted she wanted both. She kept telling them she wanted them. When the seller finally posted she would sell them separately and wanted $50 each, the other lady again said she wanted BOTH and would be coming from an hour away. Chuck quickly took the seats out the van and we headed over to get the washer.

So for the price of the lid switch and gas to get the old washer repaired I got a newer washer!

I have been wanting to do something with vinyl in my washing area but never have done it, one thing is that I could never decide for sure what I wanted *okie has such a terrible time with commitment*. Yesterday I started looking up wall quotes for laundry rooms and came across quite a few I liked.

These were the first two designs I did and was trying to decide which one I liked better. I loved the sarcasm in the first one but liked the elegant look of the second one. 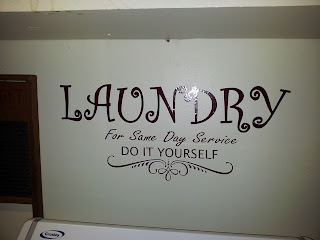 I kept looking at some others and came across another quote and that is the one I decided to go with for my laundry area. My friend Amy P. said she thought this one sounded more like me except I needed to put in "Do it your damn self" and my BFF Karen was quick to agree. And to tell the truth, they are probably right about that sounded like me HA HA HA.


I wasn't going to share the files, simply because I have been feeling a little put out about sharing lately, ya know people wanting you to design things for them and some almost demanding. But then I decided I should go ahead and share them anyway because someone might like to use them and I won't ever use the other two, at least I don't think I would use them but who knows...I might just go on a vinyl my laundry area craze, yeah okay, not likely!