Friends - Give a Hoot 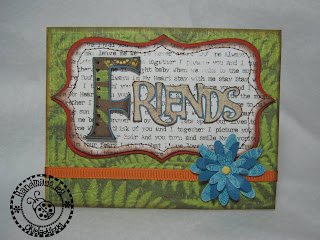 word paper I got at the GASC. I looked through one of my CARDS magazines and decided on layout for a card. The cut file for FRIENDS is set to cut 4 at a time. 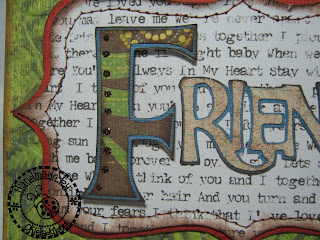 with a larger F from Alphalicious. The chipboard F was cut with the shadow feature as was the blue cardstock and top layer from patterned paper. I dotted Stickles along one side because.....well I just like bling! *okie thinks everyone should know by now that she has a serious bling addiction* And of course I pop dotted the F.

Karen did the inking on some of the cards. She kept telling me "I CAN DO STUFF" when I told her she wasn't allowed to sew on the cards.

I pounced the ink pad on the top layer of 'riends' so it would show up better. The paper I used looked a bit washed out before I did the pouncing. 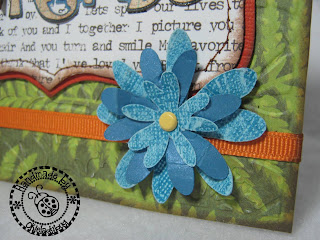 Vintage for the bottom and top layer and Stardream for the middle layer. I crumpled the flowers and then sanded the Vintage for a more distressed look. A yellow brad finished off the flower quite nicely.

Maybe BFF Karen and I can make something again today! But maybe the pool is calling us....guess we will just have to see! *okie looks down at her arms and admires her kickin tan* Yep, the pool might win out!
Posted by okieladybug or okie_ladybug

Email ThisBlogThis!Share to TwitterShare to FacebookShare to Pinterest
Labels: A2 Card, FRIENDS - Give a Hoot Alphalicious Storybook