Oh my goodness I had a blast at the Swarm today! Robin did a great job of hosting and she had the best door prizes!! I got two sets of stamps *okie just remembers she forgot to take a picture of them* as a door prize. Everyone also got a little chipboard album and word as goodies.

I was able to get some pictures but while going through them to post on here I realized I didn't get one of Robin and she sat straight across from me! *okie frowns at her incompetence and hopes someone has one to share*.

I did get a video done but I am too pooped to upload, edit and post tonight.

But I do want to share some pictures with you guys!!

Here is a picture of Robyn, aka Pink Stamper, and I. 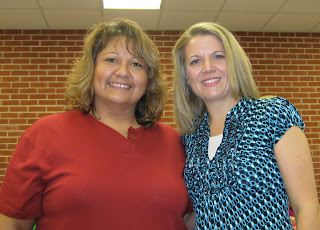 We didn't think Robyn was going to be able to make it since she and her kids have been sick for most of the week but luckily she has recovered! She and one of her son's stopped in for a little while. She brought her DVD for a door prize and the winners were super excited!! Linda took the picture and had fun taking one picture that showed my big fat belly really well *okie reaches over, grabs her Christmas card list and marks Linda's name off...remembers that Linda's husband Fred gave okie some of his famous smoked cheese when we got home and then pencils in Fred's name on the Christmas card list*.

I know you guys remember me posting about my friend Linda 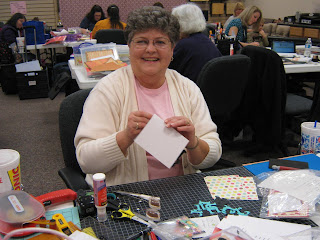 all the time...well yep, this is the one and only LGuild from the Cricut message board. Linda said she got twenty something cards done. I don't know how since she was busy all morning harping on me about working on the same layout for half the day! But remember she is a card maker and not a scrapbooker so she just does NOT get it! *okie cracks up laughin*. Oh yes...and it was HER fault we were late! I got to her house and she was still in bed! She thought the Swarm started at 10...I told her it started at 9!! But I have to admit she did get ready really really fast and we were only a little late.....fashionably late really.

This is Shelby, she was my Secret Sister! She got me 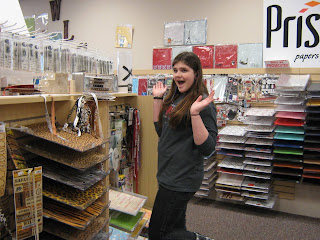 some Basic Grey Boxer paper, some bling and cut the cutest little card with ladybugs on it, which will go on my wall in craft room! *okie wonders if Shelby has a hidden camera in her craft room to know that okie didn't have any of the Boxer line but has been looking at it*. Shelby's mom was working on a "learning to drive" layout during the video and I don't think Shelby was too excited about it since it was about her LOL.


Here is Melissa B doing a little shopping. 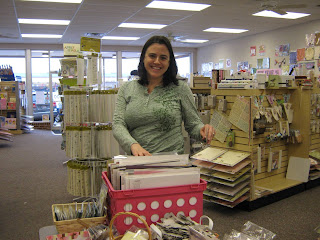 She and I talked about her coming and spending a weekend with me to get away and scrap. I think we also might have mentioned something about the swimming pool, fajita's and margarita's....but I could be mistaken *but okie clearly remembers Melissa does NOT like wine.....but okie isn't a wine drinker either*. So hopefully some weekend soon I will be having a guest and we can just stay in our PJ's and scrap all weekend!

Here is Phyllis and Debbie. They drove in from Arkansas and got the 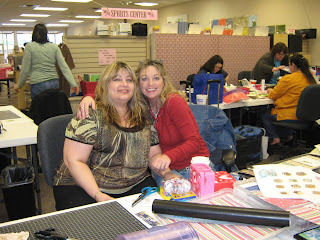 re really late *okie won't mention it was due to okie saying go west off I-35 and them getting lost and hitting a dead end* but they had a blast! They were some fun gals, let me tell ya! Debbie is happilyscrappin1 on the Cricut message board. Phyllis just joined and I can't remember what they told me her name is...something about a Daisy I think, but I could be wrong.


Here is another group of friendly ladies. And since I am noddin off sitting right here my mi 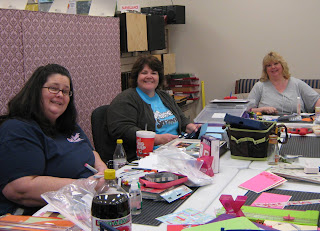 nd and went all muddly *okie doesn't think muddly is a word since it is showing misspelled and decides it should be a word and just leaves it*. I do remember the name on the right hand sides name. On the Cricut MB she goes by kimmer. The one in the middle is SoonerMT on the Cricut MB and she is Shelby's mom. She was doing the cutest learning to drive layout!

Well that is all I have to post right now. I will try to get the video done tomorrow and post it!!

OOHHH! And I was able to get 2 two page layouts done and 1 1 page, so big improvement on my part. I will post pictures of those later also.
Posted by okieladybug or okie_ladybug