I finally finished the 18 Christmas giftbags! WOOHOO!! I still want to do some birthday ones but after that...I will be putting the sets together for prizes for my party *okie sure hopes her guests like the prizes this year*.

I used a DCWV Christmas stack that I had for all of these. I think it was from 2007, but I am not sure. I got it at a sale for like 10 bucks and it is the paper, not cardstock. I used acrylic paint to "ink" all the edges since I didn't want to waste all my cat eye ink on doing these. I also used the EK Sucess Oval punches for all the handles. I admit it...I got a little lazy.

Since there are a lot of bags to a picture I left the resolution higher so when you click on the picture you can see the detail on the bags well.

On this first set I used mostly stickers. 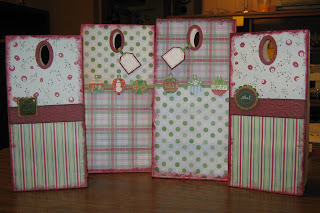 Yes you heard me right.....STICKERS! *okie hears the gasps in the crowd* Oh get over it! Ya'll know you cheat and use stickers too! HA HA HA I got the stickers last year at a bargain store for 99 cents a package. It was the weekend of my Christmas Party so The Carmen's *okie also refers to them as Thang 1 and Thang 2* were able to get some also. I did use my Stampin Up Scallop punches on the two smaller bags for the sentiments. The Stampin Up tag punches were used for the tags on the larger bags.

On the second set I did use the 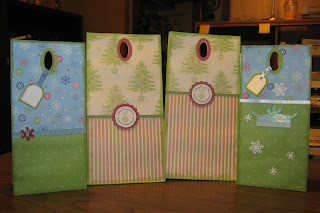 Cricut! Yep I did. Well sorta. The sentiment scallop circles on the larger bags were used with one of my cut files. I made them last year and used them on some cards and found them in my Christmas embellie drawer and I thought they went great with the paper and figured it was a good use for them. The maller bags are kinda plain, but that is okay. Not everything has to be overdone.....does it? I used some snowflakes I had punches last year also. My friend Carmen V. had brought some snowflake punches when she was here for my party and I punched a bunch while she was here.

I cheated again on this set. On the smaller 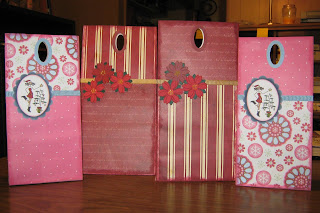 bags you will notice a Bella image. I used them last year for my part invitations and had some left. The scallops were cut with the Cricut. I actually really like those bags and think the stamped image really adds some pizazz *okie thinks pizazz looks a lot like the word pizza and suddenly realizes she is hungry*. I am sure the gals might recognize the image, but ya know the old saying...waste not want not! The larger bags are some poinsettas I made using the EK Success large daisy punch. I made those sometime in January I think it was when I was playing around with the punch when I first got it. I also found these in my Christmas embellie drawer. 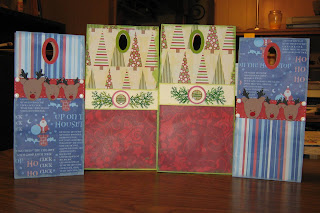 I wasn't diggin the smaller bags until I did the reindeer on them. I used the reindeer border from Doodlecharms set at like 2 1/4" I think. I used flock to do the noses on them. I did use the Dvine Swirl Cuttlebug folder on the bands of the small bags. On the larger bags *which are okie's favorite bags by far* I used the Martha Stewart branch punch. The sentiments are epoxy stickers. The band on the large bags is Mica cardstock *okie sooo loves Mica cardstock*.

And last but not least... 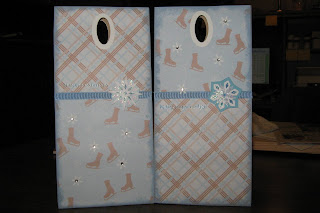 are these two small bags. They are super simple but too cute! The paper on these really make them, at least I think so. Rhinestones were added to the middle of the snowflakes. I used some rubons for sentiments and the chipboard snowflake shapes are some I got last year at the store I mentioned earlier.


I hope ya enjoy lookin at my bags! Stay tuned for the birthday ones!!
Posted by okieladybug or okie_ladybug